Meet the "mother" of the painting. Her name is Emily. Plus a list of exhibitions and selected publications regarding Victory Boogie Woogie.

Piet Mondrian’s Victory boogie woogie, (1942-44), has been in the collection of Gemeentemuseum The Hague, The Netherlands since 1998. (Click the link to see a photo of the artwork.) From 1944-87, the artwork was officially based in Meriden, CT, USA.

A. MEET THE "MOTHER" OF MONDRIAN’S VICTORY BOOGIE WOOGIE
Was the meeting and acquisition of VBW by Emily Hall Spreckels (later Tremaine) a spiritual, contemporary art "awakening"? Given her life and pursuits before and after, it certainly looks that way. 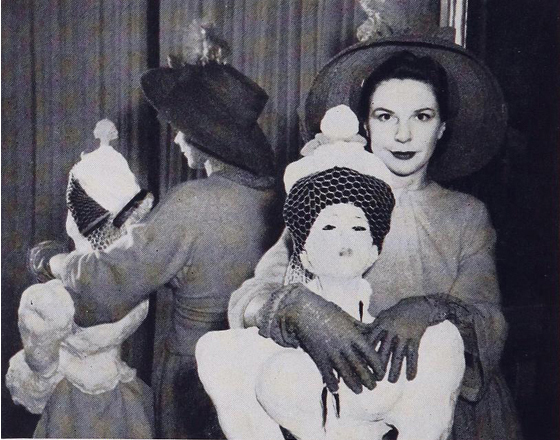 Photo of Emily Spreckels (later Tremaine), about 33, published in Town & Country in March 1941, around the time of what arguably would be among the most stressful periods in one’s life. Emily was in a turbulent year-long second marriage in Santa Barbara, California. (Her beloved first husband of about 11 years died in a plane crash just three years earlier.) In September 1940, she struck back against the second husband with "sensational allegations" in a high-profile divorce filing detailing alleged physical attacks— and also his alleged pro-Nazi support in California. The case was reported extensively for months. Piet Mondrian’s Victory boogie woogie was purchased just about three years later in 1944. Shortly after her quick, uncontested divorce from Adolph B. Spreckels, Jr. in Las Vegas in 1945 toward the end of WWII, her third attempt (they did not live together since August 1940), Emily then married Burton Tremaine. Over four decades until 1987, Emily and Burton’s life was filled with pursuing contemporary art.

Prior to Victory boogie woogie and from 1928-41, Emily Hall Tremaine (1908-87) was a titled social-celebrity and entrepreneurial society / literary magazine figure in earlier celebrity culture, extensively reported in the California and national media. She rose and later fell hard in the media as depicted in another of her acquired artworks, Andy Warhol’s Marilyn Monroe diptych, now at Tate Modern, London.

It is understood that Emily became truly fascinated with Victory boogie woogie, its magic and meaning in 1944 and this was transformative. Her connection to Mondrian’s Victory boogie woogie previews her deep dive into largely non-objective art, after Pop, with its spiritual aspect. As she got older in the 1970s and 1980s with periods of ill health, I imagine the work gave her comfort, situated in her New York living room. She would not part with it prior to her death.

Too often in art history, we focus too much on the artwork and the artist, and sometimes that’s about it. Art can have much more power than that. We should at times consider more the people that actually live with the artworks over long periods of time and those interactions, the artwork "living and breathing". Victory boogie woogie is one of the master works in the Netherlands, the country where I live, in a museum just 30 minutes away; the artwork’s status and celebrity are secondary to me, but an important backdrop.

For me, it’s first and foremost "Emily’s painting", her favorite, with personal significance and awakening for her. Mondrian enabled that for her.

From 1944-87, Victory boogie woogie was officially based in Meriden, CT, actually just down the road where I grew up. I only learned about this a little over a decade ago, and also about Emily’s work. For decades, I thought that the town never had any art or design of note, and you get used to that. It was kind of a town secret in c. 1980 when I was there, in a town that lost its industry, its wealth and its cultural knowledge, all very quickly.

I get dizzy. I see what she saw. Tears fall out of my eyes. I feel such intense joy. Sadness. And pride.

It is through Emily that I somehow developed, later in life, a deeper, almost spiritual appreciation for Art.

This section is in development. For now, see the link at the bottom of this webpage.

The research involving Tremaine / Miller Co. art & design, collected and commissioned, is ongoing. Drawn from various secondary and primary sources, the information above may change. At this stage, the information should be considered “leads” for confirmation and not necessarily “facts”.