> Make sure to see the overview page for Mondrian’s Victory boogie woogie.

A third work with Miller Company (Meriden CT) Painting toward architecture-era (c. 1945-55) roots— and featured in the PtA travelling exhibition (1947-52)— is Victory Boogie Woogie (1942-44) by Piet Mondrian. This artwork was also in a third exhibition, The discovery of Mondrian at the Gemeentemuseum in The Hague, The Netherlands (3 June - 24 September 2017). Victory Boogie Woogie was displayed among the museum’s "entire 300-strong collection of Mondrians simultaneously". [1]

The interest in Victory Boogie Woogie has arguably brought the most attention to the historical Painting toward architecture exhibition, than any other artwork or design. In this regard, Nancy Troy’s chapter one, "Mondrian and money", in The afterlife of Piet Mondrian (2013), which focused on Victory Boogie Woogie is an essential read. The chapter’s extensive footnotes also require close review. Further, Kathleen L. Housley’s Emily Hall Tremaine: Collector on the cusp (2001) provides a wider biographical context of VBW’s first owner, Emily Hall Tremaine; as art director at the Miller Company, she and her husband Burton, the CEO, organized the Miller Company’s Painting toward architecture travelling exhibition, of which Victory Boogie Woogie was the lead artwork and representation of the show. [2]

Within my previous pursuit of locating documentation about Painting toward architecture across its many exhibitions (1947-52), a considerable amount of material was gathered detailing Victory Boogie Woogie, and related works by Perle Fine, within the 28(+) exhibitions. This has led me to the following question:

How was Mondrian’s Victory Boogie Woogie represented in the 28(+) Painting toward architecture shows across America in 1947-52?

For this VBW compilation, I was specifically looking for any mention of the following:

(a) Piet Mondrian’s Victory Boogie Woogie;
(b) the copy / oil transcription of the artwork by Perle Fine;
(c) the interpretation by Perle Fine "in which the unfinished work would be completed";
(d) an interpretation, or scheme of analytical charts of VBW by Perle Fine. (See photo in Houston venue section, January 1950, below.) [4] [5], and:
(e) to try to figure out exactly what something appearing on some checklists, Mondrian’s "Lecturn Boogie-Woogie" was specifically referring to.

Also, I’ve also included general mentions to "Mondrian" when it wasn’t clear that the writer / source was referring to VBW or other works in the show: Composition (1935 / 1942) and his earlier Pier and ocean (1914).

The PtA bibliography / compilation is still in development. To avoid confusion and to clarify which materials have been reviewed on the PtA compilation page for this VBW compilation, I’ve added a "*" next to the entry. If there is no "*", then that source was received after the making of this Victory Boogie Woogie-specific compilation below, and has not yet been updated. (The code "^" refers to a comparable compilation concerning two Van Doesburg artworks in the show.)

Also, the nature of these 1947-52 sources should be met with some skepticism. An artist foundation director, whom I spoke to last year, describes it best. She recalled an instance whereby an artwork in c. 1950 was on a packing list and also an exhibition list. There was also an installation photo, and the artwork was in the exhibition catalogue. So, all of this evidence provides solid proof, right? Actually, no. It was later learned that the artist, in some sort of dispute, removed the artwork right before the exhibition opening. So, the artwork was actually not on view in the show.

Further, one should take into account communications and journalistic processes. Curators can make communications mistakes. So do press relations people, journalists, and editors. A new piece of information can change things significantly, like it can in contemporary news and life. [6]

With this skepticism in mind, let’s consider the following evidence to try to assess: how was Mondrian’s Victory Boogie Woogie represented in the 28(+) venues of Painting toward architecture? Also, what was said about VBW and its related works made by Perle Fine in articles responding to the show? 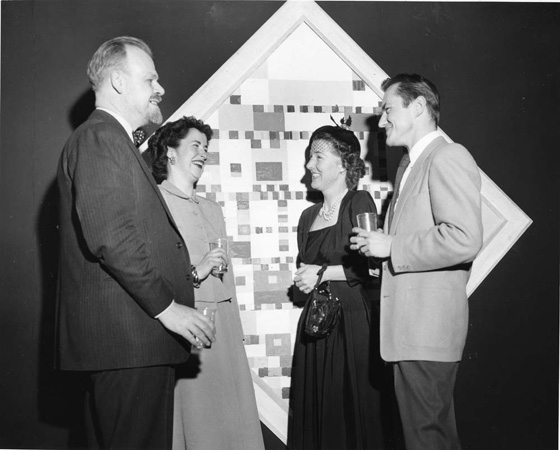 Venue 10: Knoedler Art Galleries, New York (for the benefit of the Scholarship Fund of the Institute of Fine Arts, New York University, (2 - 20 November 1948).

"Pictures being renovated at The Miller Company", (summer of 1949). (According to c. 1984 exhibition overview document. Wadsworth archive, Hartford.) [13]

Exhibition including a key PtA artwork, Victory Boogie Woogie by Piet Mondrian, but not part of the Painting toward architecture traveling exhibition.

Unlikely, but possible unknown venue (between 13 December 1949 - 7 January 1950) of Painting toward architecture. 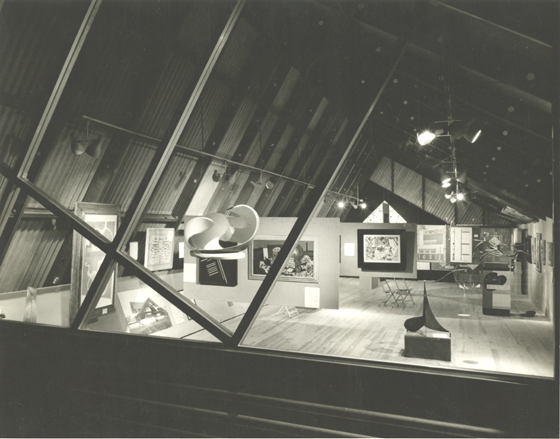 Painting toward architecture exhibition as installed at the Contemporary Art Museum, Houston (January-February 1950). Courtesy the Karl Kamrath Collection, University of Texas at Austin architectural archives. (See FN "Photo B" below for list of works in the photo.) 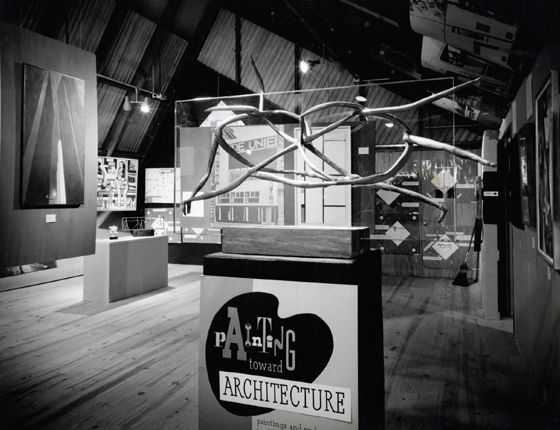 Painting toward architecture exhibition as installed at the Contemporary Art Museum, Houston (January-February 1950). Courtesy the Karl Kamrath Collection, University of Texas at Austin architectural archives. (See FN "Photo A" for list of works in the photo.)

In this installation shot, some sort of representation of Victory Boogie Woogie appears to be in the far background above. Is it the mysterious photographic lecturn? To the right, one can see an analytical chart of VBW by Perle Fine. As a sidenote, looking above the chart, one can see side views of the photo murals on the interior sloped ceiling. One of these is the Schröder House (1924) in Utrecht designed by Gerritt Rietveld.

VBW at Venue 24: Memorial Union, University of Wisconsin-Madison, WI, (sponsored by the Madison Art Association with the cooperation of the Union Gallery Committee), (23 May - 14 June 1950).

Exhibition including a key PtA artwork, Victory Boogie Woogie by Mondrian, but not part of the Painting toward architecture traveling exhibition.

Possible unknown venue(s) (between 30 April - 28 October 1951) of Painting toward architecture.

Please note that to date, no information has been located to indicate that VBW or its representations, or any Mondrian works, were at the 22 - 29 April 1951 Cornell University Miller Co. art show.

Not part of PtA exhibition, but of interest: "Design as a function of management" design conference, Aspen, Colorado (28 June - 1 July 1951). 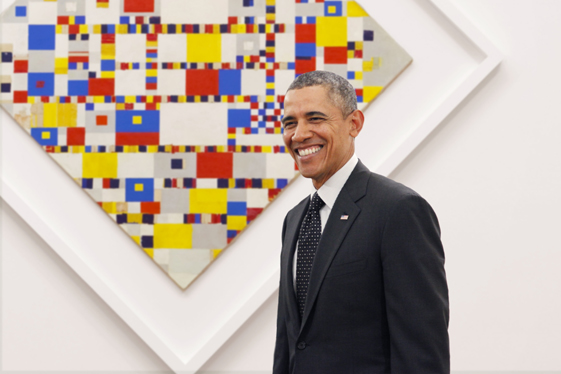 VBW at additional exhibition at Smith College, not defined as Painting toward architecture

In theory, there could be possible unknown venue(s) of Painting toward architecture after 2 June 1952 but this is unlikely.

This concludes the survey of largely newly found material in 2016-17 concerning the Painting toward architecture exhibition and the focus on Mondrian’s Victory Boogie Woogie, the copy / oil transcription of the artwork by Perle Fine, the "interpretation" by Perle Fine, the analytical charts, and the mysterious "lecturn". What results based on the review of material above is: well over a dozen Modern mysteries.

For more material gathered after this date and not part of this shortlisted VBW compilation, see the PtA-wide compilation: Painting toward architecture: Documentation and historical information. If there is no "*" after the title of the article, checklist, etc., that information was not included in the above shortlist. I wish those success who pursue to learn more to solve the exhibition mysteries, and long live interest in Painting toward architecture and Victory Boogie Woogie.

Robert Preece is a Contributing Editor of Sculpture magazine and a Visiting Researcher at the School of Architecture, Technical University - Delft in the Netherlands.

(c:) Also, for a general PtA exhibition and PtA-era overview, see: Preece, Robert. (July-August 2017). Rethinking "Painting toward architecture" (1947-52). Sculpture magazine, 36(6), pp. 18-21. (Linked above is an online reprint of this article.) Further, see the introduction / first section of this article.

[FN3] (c. 1984). Documentation: Overview and dates of Dec. 1947-1950 PtA shows at other venues, some PtA-loaned works to other shows during a Dec. 1947-52 time period (not complete), and the 1952 exhibition at Wellesley [not including found 1951 venues]. Wadsworth Atheneum archive (could be in Painting toward architecture file or the 1984 Tremaine Collection show file).

However, it is unclear exactly when this document was made, who was consulted, and to what extent it was fact-checked. For example, dates vary compared to other evidence, works in PtA that took breaks to appear in other shows are not fully listed, etc. Also, the document states, "Piet Mondrian’s Victory Boogie Woogie was one of the several paintings and pieces of sculpture that toured the country." This is literally accurate, but within the somewhat complicated VBW context, not so accurate.

[FN4] See Housley, Kathleen L. (2001). Emily Hall Tremaine: Collector on the cusp. (Direct to pdf online.) On p. 88, see an illustration of an analytical chart. On pp. 80-81, Housley writes, "They asked Fine to complete two paintings, the first a precise copy and the second an interpretation, based on a thorough analysis of the painting, in which the unfinished work would be completed." On the following page, "To compound the enormity of the undertaking for Fine, Emily wanted her to do a complete analysis of the painting accompanied by meticulous annotated charts." See references to letters, apparently transferred from the Emily Hall Tremaine Foundation archive to Box 4, Folder 27-30, "Mondrian, Piet, Perle Fine, circa 1945-1998", Artist Files, 1936-2000, Emily Hall Tremaine papers, the Archives of American Art, Smithsonian Institution, Washington, DC.

(b): See FN2a, Troy’s book, p. 54 and chapter FN124: The documentation of the wall label is footnoted by Troy to have been sent by biographer Kathleen L. Housley, who also wrote: Tranquil power: The art and life of Perle Fine (2005). Midmarch Arts Press: New York.

[FN12] See FN2a, Troy’s book, p. 53 and FN120: Frederick S. Wight [director, Institute of Contemporary Art] to Emily Hall Tremaine, 6 January 1948, folder: Restorations re: Victory Boogie Woogie, Emily Hall Tremaine Papers. First, the letter states, "We will send the Boogie-Woogie right on to the Miller Company at the conclusion of the show as you request. Another colored square has dropped down to the bottom of the picture by now, and I am sure you are wise to get the painting restored soon." I think it’s possible the year is actually "1949"; perhaps Wight made an error as some people do after the New Year.