R.J. Preece: I see. Now take a look at two images below, a drawing by Vincent van Gogh and a painting by John A. Walker. John states, "I am producing a series of six paintings that interpret six large drawings by Vincent van Gogh that he never turned into paintings. These are therefore not exact copies or reproductions of existing Van Gogh paintings."

So you have the move from drawing to painting, and it looks like Walker has finished it, although there are probably distinctions here and there. He’s even put in Vincent’s signature. But you’ll see he presents this as his own painting. Now I think this is a clear example of copyright infringement, because the idea and the move from drawing to painting don’t matter. It’s about the expression, which includes the artistic composition. 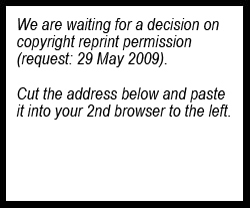 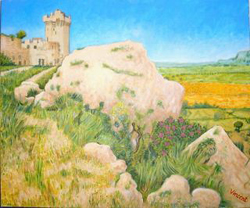 Left: Vincent van Gogh. Landscape with the Cloister at Montmojour of Arles, c.1888. Ink and chalk on paper/black chalk, brown and black ink, 43.8 x 59.8 cm. Collection of the Rijksmuseum, Amsterdam. (Right click the following link into a new browser: van Gogh landscape at the Rijksmuseum. Right: John A. Walker. After Vincent 4 (2008). Oil on linen. 120 x 100 cm. Courtesy the artist.

Paul Tackaberry: Well, he’s clearly made some artistic decisions on how to, in essence, complete the image as a painting. Probably Walker has the copyright of the end product. First, Van Gogh has been dead for more than 75 years so the image of the drawing itself is part of the public domain. But at the same time, his work might infringe on the copyright holder of the photograph of the drawing.

The issue actually is: did Walker recreate Van Gogh’s drawing himself, or did he somehow mechanically reproduce an image of the drawing, and then paint on top of that? If the former, then there’s no copyright infringement, since the copyright has expired in the Van Gogh original.

RP: Are you serious about this distinction? I understand that Walker recreated the drawing himself. He says he copied it, but did this with his own hand.
PT: This distinction makes all the different in the world. It’s very important. Please also note that if Van Gogh had not been dead more than 75 years, then the painting itself would be clear copyright infringement based on the expression. The copyright holder then would be the estate. The idea behind the artwork is a non-issue.