R.J. Preece: Now take a look at Hymn (1999) below by Damien Hirst. In Julian Stallabrass’s book, High Art Lite (1999/2006), Stallabrass writes, “Hymn, a 20-foot-high scaled-up version of a Humbrol figure designed to teach anatomy to children[…] Humbrol unsurprisingly decided to sue over this overt act of plagiarism; Hirst was to settle out of court by donating an undisclosed sum to charity.” (Page 289.) So, here, Hirst apparently has copied this figure and made it monumental. So this is a clear case of copyright infringement, right?
Paul Tackaberry: Presumably, yes. 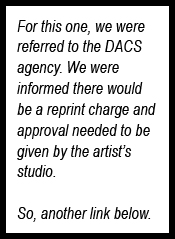 RP: But the Hombrol figure has to be original. To me, the figure itself does not seem original. It’s a teaching tool and one probably sees these produced by different companies and they’ve been around for some time.
PT: True, but the issue again is the expression: the colors of the colon, the texture, etc. The threshold for originality is low. It does not mean "clever" or "creative"; one thing it does mean is “not copied.” If five companies are making these sorts of teaching tools, I’d imagine they are not all identical. I’m sure there have been decisions about color and texture. We’re assuming here from the reading that the figures are identical and the scale has simply been increased. To determine if the Humbrol figure passes the originality threshold, more information is required.

RP: Next, look to the left and we see LeKay’s Study for Ying and Yang (1990). Now, obviously these are two different anatomical figures. But what do you think of LeKay’s work? 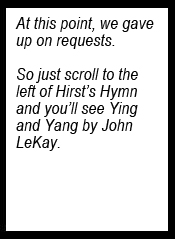 PT: Well, I’m not sure about the context here. If he bought that from a company, and referred to it as a ready-made, that’s not reproduction and not copyright infringement in itself. But if it were then displayed publicly, then in some countries that is a violation of the public exhibition right.

RP: Now there’s no issue about the copyright of an art idea, because ideas cannot be copyrighted, right? This seems the big problem. While art may try to claim ownership of originality of ideas, legally this is impossible.
PT: I’d agree. That is the reality.

RP: Next, let’s go to the Wikipedia page of LeKay and scroll down to the skulls. In June 2007, the Times Online ran a story titled "My old friend stole my skull idea". Visually these images look nothing like the diamond skull. So then that leaves us possibly with the idea. So there’s no copyright infringement.
PT: Correct! At most, this is maybe some sort of argument for a lack of originality in an artistic sense, but I don’t see much here for a copyright infringement claim.

RP: I bet you see a lot of copyright infringement all over the place, don’t you?
PT: Absolutely. It’s widespread not only on a personal level, like copying music in the house, but also in business. That’s why, referring to the Jones article in The Guardian, he raises an interesting point: not whether the 16-year-old infringed on the copyright of Damien Hirst, but that Hirst reportedly chose to enforce his rights in this case. The question does seem: Why is he doing this?