D.M.: I’m undecided on the art this time. I like the colours and the flecks of red into the black, but the style isn’t to my taste. The song doesn’t interest me... I want something more like ’Give Me Novacaine’ or ’Basket Case’.

L.R.: Okay, now we’re getting into some respectable punk territory. Yet, it is too disciplined-–no way Sex Pistols but, yes, elements of American 21st century alternative. Campus bars and pubs will eat this right up. The art loses me here.


Guest reviewer Delfina: I remember my art school profs cautioning me against putting a scary face in the middle of a piece in an attempt to give it emotional impact. Having said that, I think this song is a bit one-note in its insistence on being so unrelentingly harsh and dark. So I suppose the art captures it. Still, I’m not feeling the raw plaintive scream of the song in the art, I’m just being told that I should by the spooky face.

R.J.: This song and image are not for me... it seems like a high school makeout song!

D.M.: Oh no! Here I am in my early 20s quite liking both the "makeout" song—and the image! I’m a big fan of black and white photography, so I’m already biased, even though it’s quite an obvious image choice. I guess the song isn’t political which is what we’ve come to expect from GD, but I like it as a chill out song. So many heavy rock songs are angry so this is a nice change.

L.R.: It’s the sort of song one would see in “Skins” or some other coming-of-age television series or teen romance comedy-drama. U2’s own Last Night on Earth song is a better treading of the territory of why we’re blinded by the daily ritualistic spectacle of consuming, eating, and drinking the fantasy. The visions of our own idiosyncratic fantasies don’t correspond to the norms and dominant ideological blocks of our societies and communities. So, we navigate the narrow channel precariously, being content with images almost too subtle for many of us to discern.


Guest reviewer Delfina: I really like the simplicity of this image. Hands held together could be mawkish, but they aren’t here, because of the small details that make the image contemporary. These could be my hands or your hands. I appreciate the watchband. The music makes this song for me: it could be a love song like many others but the soulful singing and the slow, mournful music carries it through. It may be that I’m a sucker for Billie Joe’s voice, but I find it moving. 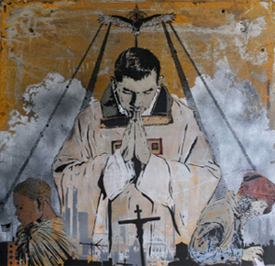 Chris Stain: "The band didn’t want work that was word-for-word from their song. But after reading the lyrics though I couldn’t help but chime into their criticism of religion."


R.J.: This song is more to my taste. I really like this image. I think the music+art works well here. Where do these portrait images come from? The one on the bottom left looks like from the Sistine Chapel—after the restoration? I don’t relate to the title though, "East Jesus nowhere". Yeah I know where that is abstractly—never lived in it—but isn’t it too hard on "them"?

D.M.: This song isn’t bad plus they did a pretty good performance of it on the VMAs, yet I find the lyrics a bit too judgmental in places. The imagery is ok; I can see how they relate to each other, but too Bansky-esque for me.

L.R.: Here, I think we have a perfect match for music+art. People constantly debate what GD is going after in this song. Some see it being pro-religious; others see the opposite. The imagery to me suggests the struggle of earthly mortals in reaching the Christian ideal.


Guest reviewer Delfina: I love this piece. I love the color choices: the chalky gray and the bold-but-subdued ochre, along with the charcoal-black details. It’s quiet but hard-hitting. The minister looks genuinely pious, but then he’s a flat one-dimensional character (he’s a stencil), and the sooty light shining from above comes from a bird of prey (an American eagle?), and not a dove. The art has similar nuances as the song, though it’s less angry. It looks more resigned. The music is a swift kick in the head, but then changes to soft passages, mirroring the conflicted feelings of disgust and contrition expressed in the lyrics.