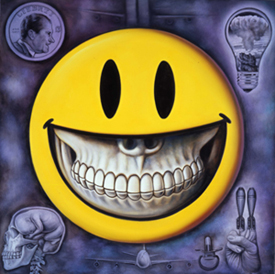 Ed. note: we received the following statement after our comments were formed.

"The smiley face/skull is intended to reflect the sentiments of the song using a simple twist on a beloved iconic image from the 1960s. The background images are intended to elaborate on the song’s theme of the dark side of good intentions: a leader’s ideology as the coinage of the generation, the belief in technology as the new enlightenment, the intellectual DNA of ideology and the folly of peace expressed with a big stick."—Ron English


R.J.: With this song, listening to the beginning, my eye plays off the focal points and the symbolism comes through. This song doesn’t pull me in... is this alternative in the 2000s? It sounds like classic rock to me.

D.M.: The song just sounds like generic Green Day, nothing more, nothing less. And I agree with RJ in regard to the commercial aspect. The imagery is commonplace which I presume is deliberate—the smiley face is now iconic—but both the song and artwork seem like they’re trying to be "alternative", but are just taking something commercial and adding a slight twist to it. Too formulaic for me.

L.R.: Strange as it seems, I find that this track struggles to reconceptualize the trauma and tragedy of life, at the same time when the commercialized economy of unlimited fun is meant to divert away from the politics of fear. I think the song is clumsy, indeed, but one wonders if Green Day can pull it off? The perversely paradoxical art is definitely NeoLacanian.

Guest reviewer Delfina: This song is an anthem in the rock-and-roll tradition. The narrator is everyman tugged between bouts of ineffectual hopefulness and earnest struggle. He is desperately trying to make his way through the rubble left by cutthroat politicians and an indifferent and chaotic mass culture. The artwork is sardonic in a way that the song is not. The image of the smiley face with the skull inside it is too clever, and visually it’s so bold that it doesn’t leave much room to evoke the nuances of the song. But the imagery on the outer edges, in soft grays, has unexpected juxtapositions. I especially like the fetus in the cranium and the bomb going off in a light bulb. 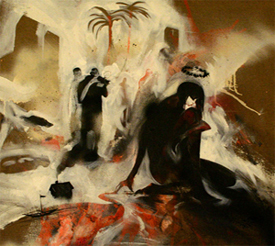 R.J.: I find the image interesting, but this is not my kind of song.

D.M.: Now this is something I really like. I’m waiting for Green Day to do something out of their comfort zone, so when they do, I get excited. Although this does sound rather familiar (Mama by MCR anyone?). I love the artwork as well, the colours are evocative and fiery, and the style is very me. I’d like to see this up close as it looks like it could be really interesting.

L.R: Immediately one is reminded of Queen’s Bohemian Rhapsody album. The divertissement is incomplete, though. We need it to do more than titillate our senses. We need it for resistance. The artwork challenges the dullness of life. Can we ever regenerate... spiritually mired in our harsh realities?


Guest reviewer Delfina: Green Day often juxtaposes upbeat music with dark lyrics. This song has a jaunty, vaudevillian melody, while singing about a character who is stranded and in despair. The art zeroes in on the despair of the title character and the ominous figures in the background that are its source. But it leaves out the bouncy quality of the music, which makes it, for me, a bit one-dimensional as an illustration of the song. It works well on its own as a nightmarish vision, with the desperate brush strokes and a blood-red undertone (but I wish the figures weren’t quite so ghoulish).