(Ed. note: We received the statement after forming our comments.)

"The song wasn’t released when I painted the piece so I had to work entirely from the lyrics as opposed to the feeling and emotion of the music itself. To me the lyrics paint a picture of a character who’s angry about the past and scared of the future, trying her best to survive in a world full of lies."
—Eelus

D.M.: Which American girls are Billy-Joe and the artist referring to? Looks like an angry goth girl let loose on her school art project...both pretty forgettable, sorry.

L.R.: Tired, uninspired, cliché – both art and song. The sonic or visual depictions should be more exaggerated. Clearly, everyone is bedeviled by the contradictions. Lost here.

R.J. (after receiving artist quote): I’ve noticed something... I think I’m a nicer commentator if I get contact from an artist... :-(


Guest reviewer Delfina: This is my favorite song on the album. The staccato, infectious beat is pure Green Day, and the lyrics are funny and serious in just the right places. The art is at its best with the bike rider (that says x). That little image does it for me, possibly because I myself ride my bike everywhere and love the line "she is riding her bike like a fugitive of critical mass." The girl is looking a bit emo for my taste; I think I may have seen her at the mall. 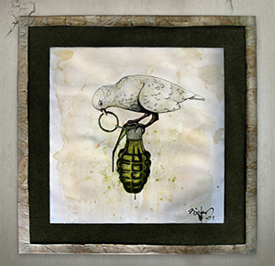 Sixten. Horseshoes and Handgrenades, (2009). Based on an original painting called Peace out. Painting mounted on old Norwegian army blanket. Frame with duct tape, masking tape and coffee, 30 x 30 in.

"I went over [the original work] with coffee and watercolours to create more textures and tones. It turned out way better than I dared hope for and I’m really happy with the result. It was the first time I worked with watercolours.

With the frame, I wanted to give it a rough worn out feel, a bit like a mummy."
—Sixten


R.J.: Now this is more my kind of song!! "I’m not f***in’ around", and I really like this image. It’s like something classical in color and layout, like something you might see in a classic Philadelphia interior, but of course the subjects are different. Innocence and implied disaster. I’d buy this one...

D.M.: Sorry RJ, I think the images are too obvious. But the song is actually really growing on me, much like American Idiot did when it was first released. I wanted to dislike it for being so popular, but eventually gave in... the art just isn’t strong enough for the music—I like drama!

L.R.: Definitely strong entry here. The jungle law of Social Darwinism undergirds the establishment where the cliché of “close only counts in horseshoes and handgrenades” matters. The punk formalism works here because the song hits on the right historical notes. Individual freedom is okay if it doesn’t upset or usurp Family and Father.

For the art, I find that the artist achieves the deft juxtaposition in the simple watercolour medium, tempering the images in tonal colors that seem fresh and liberating yet still slyly perverse.


Guest reviewer Delfina: Kickass song. Not fucking around, indeed! It’s like a sonic blast that clears out the crap knocking around in your head. I like the art quite a bit, but it’s strangely soft, not very much like the song in tone. A dove trying to pull the pin out of a grenade is a deft image, but if wasn’t for the literal knowledge of what that means, the artwork itself is not visually menacing at all (coffee stains and spittle notwithstanding). Still, on its own the piece has a purity to it that is moving. (The bird looks more like a curious parakeet, which I would like even better.)

R.J.: Wow. This is really cool... the replay of the intro with this image. I of course like the media coverage references. I’ve got to contact this artist Jeremiah... This image is so real, and I feel the sound of the intro. Again I like the punk elements, but the cuts into more classic rock alienate me.

D.M.: The art isn’t bad, again with the stylised Pop-art element though...the song really isn’t my cup of tea. It’s a bit too repetitive, and not in a good way.

L.R. Again, we’re on firm postmodern ground here in sound and imagery. Like "Horseshoes", the formalism in sound works because of the historical references. We are not trapped nor led by hysteria and fears about terrorism and global apocalypses. We don’t have to f*cking conform, we don’t have to accept fucking censorship, and we don’t even have to achieve f*cking consensus. The subtle lyricism opens the path to how we want to contemplate our f*cking fantasies (and not just the sexual ones, either).


Guest reviewer Delfina: Yes! I love this image, with the wealthy businessman calmly sipping his martini while there’s a riot on TV, his world papered by discarded news. It’s seen through the lens of a street artist, as disenchanted as the song’s narrator, either of whom could be the masked protester on the TV screen. It works both visually and literally, the message and the images perfectly integrated. The song is not one of my favorites: it’s a bit chaotic. But the lyrics are right on the money: "I am a nation without bureaucratic ties." The verses sound like "Deadbeat Holiday," so it’s classic Green Day, which in my view is a good thing.