Excerpt from Mark Pimlott’s book, Without and within: Essays on territory and the interior (Episode Publishers: Rotterdam). 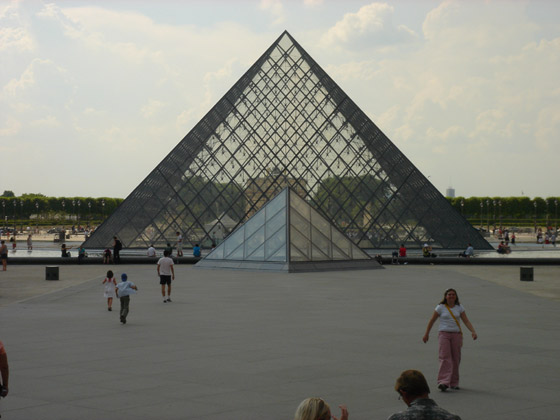 A subtle demonstration of the monumental interior’s capacity for representing different possibilities all at once is the extension to the Musée du Louvre, or Grand Louvre, in Paris, by Ieoh Ming Pei and partners (1984-1989; 1994). Pei’s commission was to look at its complete reorganisation. The Louvre had long been labyrinthine, confusing, and woefully lacking even basic facilities for visitors. Only a small proportion of the museum’s visitors came from Paris. The entire palace was dedicated to an incongruent group of functions, a consequence of its long and complex history. The project for its reorganisation and extension in 1983 was an edict by President François Mitterrand, who had announced shortly after his election in 1981 that the Ministère des Finances, which had occupied the Richelieu wing of the Louvre since 1870, would be relocated to a new building in the east of Paris. Mitterrand pursued and appointed I.M. Pei, primarily on the basis of his design for the East Wing of the National Gallery of Art in Washington.[1] The appointment was controversial: Pei’s foreign-ness was widely believed to render necessarily sensitive considerations of the Louvre and of Paris, in particular, issues of heritage or patrimoine, unlikely or impossible. There was great fear that he would usher American crassness—the anomie of MacDonald’s and Las Vegas—into the heart of French public life, and agitate for its destruction. 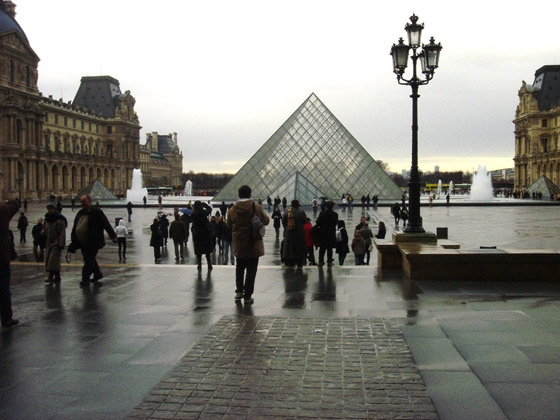 I. M. Pei’s project regarded the Louvre and its extensions as a coherent whole, approached as one institution and one building by the public, rather than as a series of discrete museums tied to separate wings or pavilions. Pei proposed that all of these— Richelieu, Sully and Denon— should be secured to the Cour Napoléon, onto which they faced. The Cour furthermore was open to the Jardins de Tuilerie and the axis of the Champs-Elysées, and it was this fact that gave the project and the Louvre as a whole, an orientation. Many connections were necessary to make the complex function as a modern museum. A wealth of new components were required: auditoria, temporary exhibition galleries, staging areas, storage, internal communications, workshops, and delivery / expedition areas. These and, finally, the considerations regarding access for the public, led to the design of two underground levels that filled the entire courtyard. Pei regarded the solution not solely as a matter of effecting the museum’s operations, but as the remedy to an essentially urban problem, relieving the ancien-Louvre’s obstruction of the bulk of the première arrondissement from contact with the Seine. Pei thought that the site had to be used by the public in order to realise this contact: thus urban and museological imperatives coincided. Clarity was achieved in the form of an open concourse between the variously extended museum wings, permitting easy access to each of them. In its role as urban device, the concourse was legitimised as a public space, intended by Pei to be considered to be part of the city’s structure of public spaces. The concourse had to appear to interfere as little as possible with the image of the historic pavilions above ground. Therefore, the solution could only be implemented freely under the Louvre, underground. The connection between the various museum components as well as the city and the Seine would be, of necessity both functional and representational, an underground concourse. 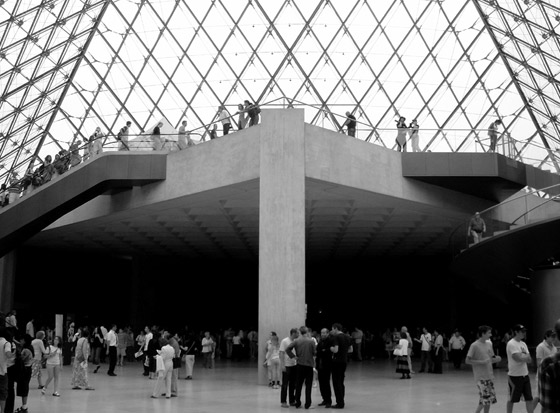 Rather than reiterating the solution established by his office in Montréal decades earlier— in which the underground promenades accepted access from many points, making the concourse an inevitable zone of convergence for myriad cross-town routes I. M. Pei’s treatment for the Louvre insisted on focussing its entry at one point, at the nexus of its implied underground routes. Therefore, above ground, at the centre of the Cour Napoléon, which was, according to Pei, the Louvre’s "centre of gravity",[2] Pei proposed a glass pyramid— arousing immediate scorn— surrounded on three sides by reflecting pools and three pyramidions, breached by revolving doors on the flank facing the Tuileries. This surprising solution straddled the difficult alternatives of being monumental in its own right and subservient to the historical setting in its entirety. The institutional and public reactions to Pei’s proposal painted its strategy as a failure: the pyramid itself was widely regarded as an incomprehensible affront,[3] and the foreseen interior space was described both as a mausoleum and a cheap American shopping mall. 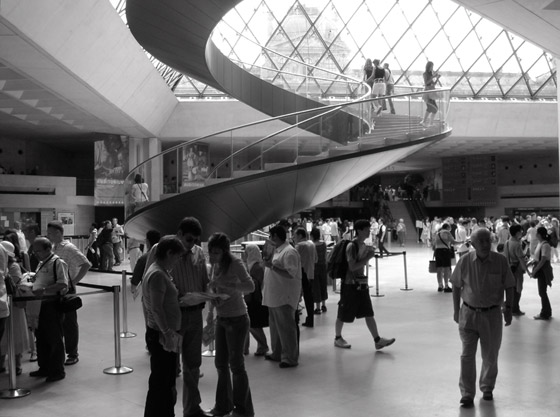 Widely lampooned, the pyramid was taken to be a monument to the vanity and presumed autocracy of the French president; a funereal presence in the heart of Paris; a ruinous gadget; a bauble.[4] After many visual examinations— including one in which the outline of the pyramid was rigged up at full scale for the approval of the mayor of Paris and French premier-ministre, Jacques Chirac— a correct proportion was arrived at that happened to coincide precisely with that of the Great Pyramids at Giza, adding fuel to its detractors’ scandalised criticism. Upon completion, it was in many ways all that its critics said it would be. In daylight, it appeared to be a slightly small, dull, though monumental object, despite I. M. Pei’s prediction that it would disappear by reflecting the changing Paris sky. When struck by either raking light or nocturnal illumination, the tekhne of the pyramid’s interior structural support became visible, glittering in the manner of the feared and maligned bauble, so joining the scenery of the other gilded and illuminated monuments of Paris. In this company it was no more vulgar than the Arc de Carousel or the Tour Eiffel. It was a spectacle for a number of reasons: almost too small to be the front door of the Louvre, the pyramid was perpetually surrounded with queues of hopeful visitors guided by ropes and improvised signposts; for a long time, it benefited from its own notoriety; each month, its glazed surfaces were washed by trained mountain climbers, who would abseil its slopes, armed with hoses, sponges and squeegees, swelling the attendant crowds. (Abseilers have been replaced by a small, creeping machine.) With regard to the pyramid being monumental in its own right or in the service of the ancien-Louvre’s own monumentality, it achieved a compromise by appearing to be the carapace of a monument, a ghost sketched out in structural filigree. In this way, Pei’s pyramid was reminiscent of the architecture of French gardens and their latent melancholy, always suggesting ruination and decay, as kinds of momento mori; its resolution was furthermore consistent with Modernism’s uncomfortable relationship with the Monument, which its architects pretended to have discarded as an irrelevant outcome of historical bourgeois vanity or sentimentality. If the monument is obliged to appear in contemporary architecture, it does so in the manner of an apology: for example, the dome that completed and represented Norman Foster’s resuscitation of the Reichstag in Berlin (1995-1999) replaced the glass and steel cupola destroyed by fire in a way that suggested the ruined cupola and State, and the inevitability of its reconstruction. With its spiral passarelle, its form was treated as a spectacle for the German public, arranged as a tribute to a Phoenix-like German democracy. Pei’s pyramid appeared as an object in an interior, a monumental, albeit fragile miniature surrounded by the restored, illuminated ancien-Louvre, obliged to assume the role of a spectacle within its historical context. Part of the pyramid’s dilemma was the problem experienced by Modern architects’ confrontations with History itself. History obliges modern constructions to make specific addresses to its authority, making references to the monumental almost inevitable. These addresses, removed from daily urban life, are experienced as spectacle.[5] Images of the Second World War’s total devastation seem to haunt projects such as the Louvre pyramid and the Reichstag dome, which labour under the yoke of History: the photographs, for example, of the scorched ruins of Berlin or Hiroshima are emblematic of an historical anxiety that finds its echo in the nervous concoctions of spectacles for mass entertainment.

Once through the revolving doors at the base of the glass pyramid, the visitor finds himself on a triangular platform that pushes into a square void, suspended over a hall of great volume, deep and high, sheltered by the glass pyramid. Its volume is much greater than perceived from outside. Two escalators springing from the platform offer descent to the concourse floor, as do the pairing of an open hydraulic lift (for wheelchair users and those who just want to ride for fun) and a wide spiral staircase that wraps around it. Looking through the diamond-shaped tracery of the pyramid’s supporting structural web, the pavilions of the ancien-Louvre embrace and dominate the view. The all-over structure of cables, struts and fixings for the pyramid’s glazing is very fine, with precisely-engineered details in cast and spun metal, like those one might expect to find on a very expensive yacht.[6] The view through the pyramid and its rigging to the impressive stones of the Sully, Denon and Richelieu pavilions is almost didactic; looking below, the entirety of an underground structure connecting the protagonists of the scene makes itself apparent. At this moment, the surface of the Cour Napoléon is perceived as a platform over that underground structure: with this, the visitor descends into an under-world he knows to be as large as the Louvre itself. 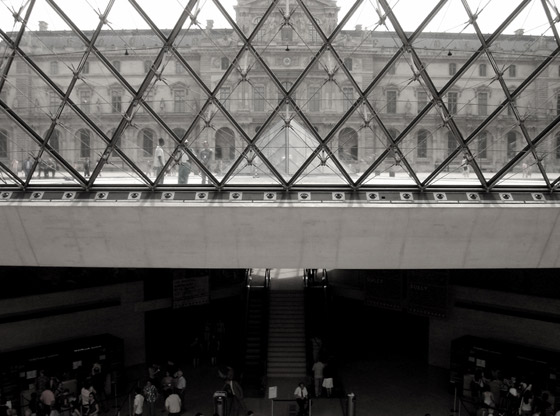 Upon descent, the scale of the interior makes itself known. The Pyramid above floods it with daylight; the figure describing the void as perceived from above, assumes from below the form of a very large atrium supported by four giant piers, whose soffit is a coffered slab. The platform from which the space was introduced is supported on a fifth massive pier in the precise centre of the space, which is square, yet turned at forty-five degrees to the orientation of the opening and pyramid above. Under the shelter of the gigantic structure, steel ædicules accommodate ticket desks and guard stone-clad cloakrooms. Between these— at the corners of the lower square—are entrances to galleries and lecture halls, as well as stairs and escalators ascending to a mezzanine level. This level provides access to the three main pavilions. From the mezzanine, terraces with a café, brasserie and restaurant overlook the large central space. 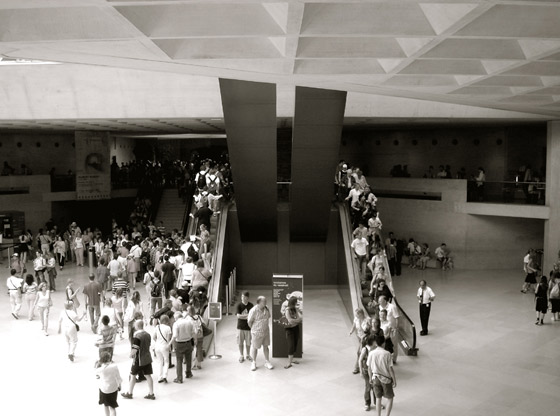 I.M. Pei’s plan distributes people effectively from the central concourse to myriad destinations within its vast subterranean network. The complex is easily understood from the space under the pyramid, despite its colossal size. The effectiveness of the underground space furthermore stems from its affinity with other spaces and typologies: the architectonic framework evokes, at gigantic scale, an ancient atrium of a Pompeiian villa; the treatment of the opening above, with its tracery of engineered castings and cables, evokes the atria of corporate office buildings; the busy movement of people from all directions suggests the concourses of rail termini or international airports. The underground space is obliged to assume the role of guardian of the Grand Louvre’s treasures: it does so by offering an elaborate set of guises, and this is clearly Pei’s great skill, effected modestly, despite an evident monumentality.[7] Pei’s Grand Louvre dons the mantle of the sacred underground,[8] the mausoleum or the sepulchre— in the manner of the Pantheon, or of the works and fantasies of Soane or Piranesi— in order to establish its authority: its variously unfolding representations are simply means to an end. It is at once the sarcophagus of historical remains and a compelling, fully integrated “retail destination.” The mutability of the building’s various evocations make it at once practical and authoritative: its concourse invites easy use; its cool, corporate character establishes a purposeful distance between it and its users. In fusing such characteristics, Pei’s underground space at once makes itself legible to a broad public and appeals to a sense of decorum and of orderly behaviour: the same qualities that came to characterise the monumental interiors of the City Beautiful movement. 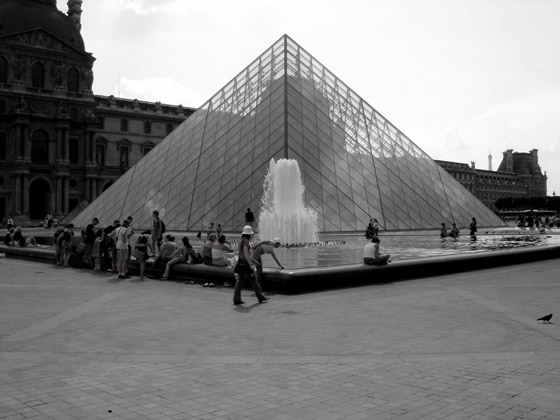