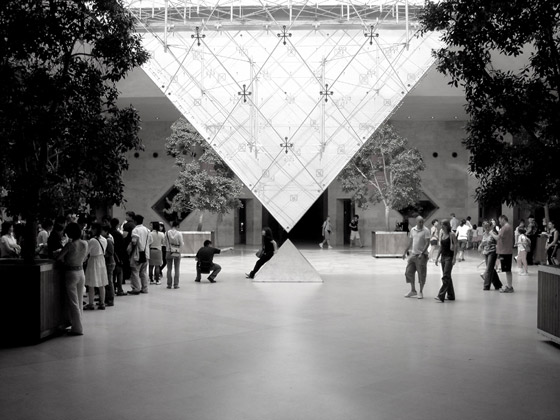 The main hall sets the visitor on many possible itineraries in the depths of the Grand Louvre’s interior; it is a hub of movement and activity filled with the traffic of many visitors crossing paths with each other, who trace itineraries not necessarily related to the core collections of the museum. In addition to lecture halls, temporary exhibition spaces, restaurants and an extensive museum shop dispersed in the manner of boutiques, is a shopping mall that was added in the second phase of the project in 1994, with its own atrium, illuminated by an inverted glass pyramid. A bus terminal and a multi-storey underground parking garage were also part of this addition.[9] The Grand Louvre is an attraction, a destination accommodating interior public life. People come to eat, to meet people, to attend lectures or film showings, to shop in the Museum shops or the shopping mall; they come, through the shopping mall, from the underground car park and bus terminal under the Arc du Carousel; they go to the Museum galleries and cross between the various pavilions; they tour the foundations of the first, fortified, Palais du Louvre under the Cour Carré. The interior space of the Grand Louvre appeals to a public that increasingly defines its freedom as the franchise to consume as and what it desires anywhere, and to be seen in the act of doing so. It recognises that commodities and historical artefacts occupy the same space of publicity, entertainment and consumption. 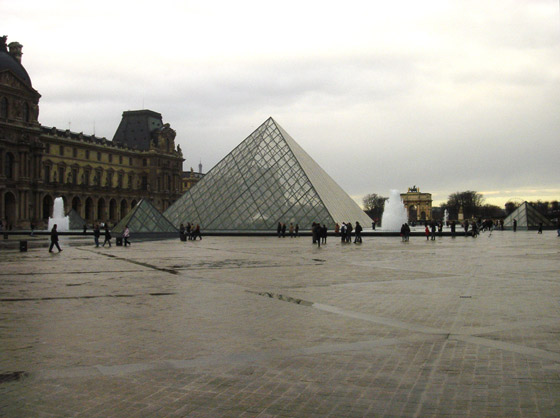 According to I. M. Pei, the pyramid was placed at the Louvre’s “centre of gravity.” [10] Pei considered this point as not merely the centre of the Museum but an important node of movement within the city itself. The central space performs as a great concourse for the museum and the city, not only metaphorically, but as a fact. The tendency for contemporary museums in metropolitan centres to assume characteristics of transport hubs,[11] has a representational significance greater than functional or financial imperatives to take on such forms. Pei’s concourses in Washington and in Paris represent an increasingly common condition, wherein great public interiors have been obliged— by institutional marketing and consumer demand— to offer themselves as many places at once. Although the financial circumstances of museums have conditioned the inclusion of extensive retail programmes in their public spaces and in their marketing to potential sponsors, investors and the public,[12] their appearances, as ambiguously defined environments offering themselves to consumers, are requisite to their success. Indeed, the crowded interiors of international museums, with their movements of visitors from one attraction to another, resemble those of very large shopping malls— such as the Mall of America or the West Edmonton Mall— and the much earlier precedents of the great metropolitan department stores in Europe and the United States. In the case of the department stores, the inclusion of as much diversity as possible—particularly entertainments and spectacle—was deployed to attract and keep customers by unleashing fantasy, [13] rendering establishments and their proprietors central to the imaginary dimension of their cities. 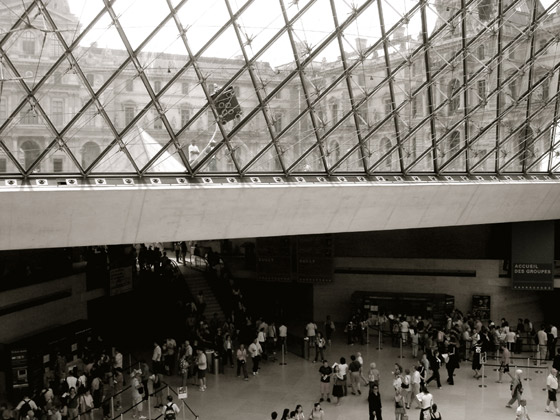 In this sense, despite its stylistic austerity— consistent with the nature of the Louvre’s sense of itself and its place within French culture [14]— I. M. Pei’s extension offers the Louvre itself— mythical and actual— for display. Pei’s new spaces provide literal platforms where visitors can look at themselves in the act of looking at each other, as a form of spectacle. The Louvre is self-regarding as a phenomenon and as a representation. The great traceried window of the pyramid looks into what appears to be a framed perspective of the pavilions of the ancien-Louvre, as though they were the constituents of an ideal city, completely enveloping the viewer. In the shopping mall, daylight from above is provided by an inverted pyramid, an ironic picture of the development’s controversial icon, turned on its head. Finally, in the space created under the surface of the Cour Carré, the twelfth-century foundations of the original Palais du Louvre are displayed as though a perfect historical artefact, illuminated like a treasure— the centre-piece of ancient Paris [15]— or like a miniature, medieval city, preserved in its entirety, which awaits a siege of tourists by night.

Within the Grand Louvre, a series of subtly, historically related typologies are elided and merged: the characteristics of each, having come closer together over time and legitimated by a history of social and cultural practices, are fused to create something new which introduces and sustains itself through subtle transformations of familiar imagery. Its apparently contradictory programme elements are rendered significant by their accumulation, transforming the closed museum into an open urban public environment. The Grand Louvre is organised and presented so that it can be considered as a legitimate part of the city, continuous with Paris’s spaces and experiences, at its centre of gravity. It is a carefully measured environment, comprised of representations that are composed and conjoined with particular delicacy. Hence its success at absorbing thousands of visitors each hour. [16] 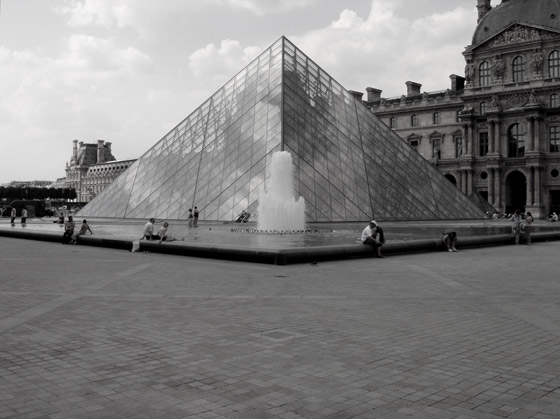