Earlier during the week, one of the interns proposed something at ADP... It became clear that I needed to release this presentation at this time. So, I’ve linked my laptop to the projector... someone turn down the lights...

R.J. Preece: With your experiences in publishing—and knowing about how texts are put together and the issues involved in this—has it changed your view of design history?
Marcus Field: I suppose so, yeah.

[As a student] I had read lots of books, and I believed them—I suppose I was a bit naive. You think you know about an architect’s work, you think it’s wonderful and you believe the stories. But in ten years I’ve gathered an amazing amount of knowledge on how things really work.

In this interview, Marcus says, "But in ten years...
I’ve gathered an amazing amount of knowledge...
on how things really work."

That was Marcus.
But almost everyone I’ve ever asked involved in the media says more or less the same thing—if they’ll answer key questions. So, we may be reading the same texts, but the difference is our knowledge and experience of the publication contexts.

Now I’d like to tell you a little story...
It’s a story about possible defamation, magazine publishing—and academic publication.
And the potential impact of the law on contemporary art and design texts.

Please note, we don’t know about its full impact.
We of course may hear things...
And of course it’s much easier to not explore really tough questions.

Consider the following two reports from 1999 and 2000—compare and contrast... 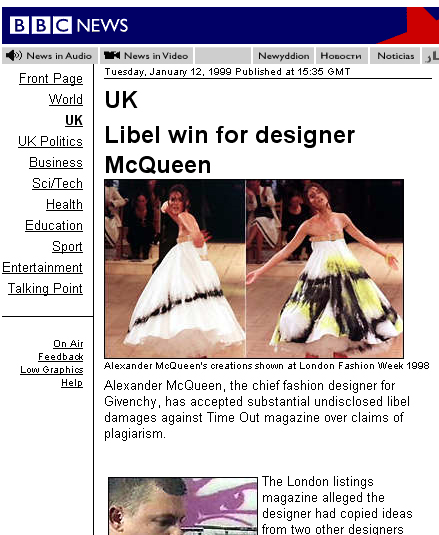 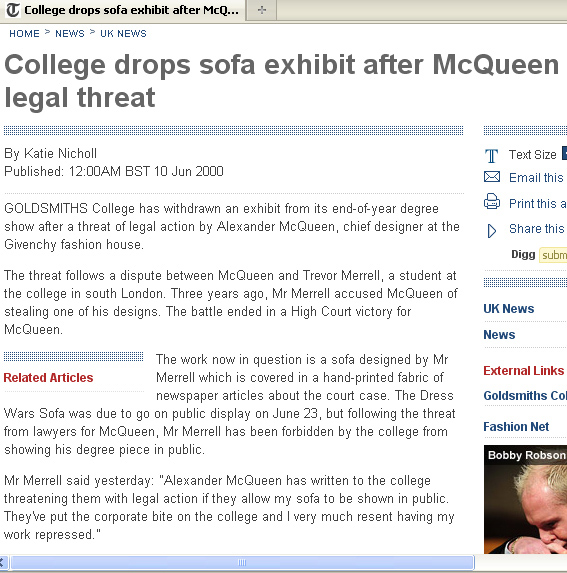 So, here we have two different reports, by the BBC and the Telegraph.

There probably is a lot more to these three stories—
As we’re just looking at the text surface.
These reports show the issue of libel law popping up from beneath the surface,
and becoming discussed.

Frankly, the dynamic seems quite similar to watching politics and the analysis nightly on television.
The story twists and turns as new information is revealed.
But what is it in the art/design field that we tend to think that our sector is different from politics and business?
Why are we so surprised to learn when art/design activity is just like anything else?

I have some of my own stories about the text surface and what’s underneath.

I aim to do this respectfully,
And I fully honour confidentiality agreements.
When something may be sensitive in the art/design world,
I even take the extra step to confirm, specifically,
That this is something the speaker wants to say about their context.

In the end, I think some of the challenges are systemic,
The challenges are always there.
But the biggest challenges may have to do with art and design idealism,
which is ingrained in us by the Academy...
and also that most people aren’t trained in critical media discourse analysis.
Certainly with this current state, when problems in the art world flash up to the text surface, they can definitely shock us.

In fact, I was a little shocked back in 1999.
I was working on my MA dissertation, which resulted in a 123-page document.
The title?
I called it “The Problematic Discourse on ‘Philippe Starck’s’ Delano hotel”,
but it could apply to almost any designer, or hotel, that attracted—and faced—widespread media interest.
And with that, a bunch of questions from a variety of directions.

As many of you know, this hotel was opened in 1995 in Miami Beach, Florida in America.

Below is an image of the front of the hotel,
With one of its focal points—its sensational entrance—that looks inviting. 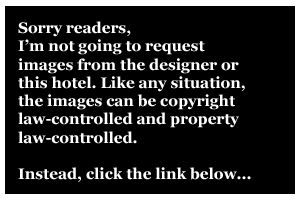 This design is not only a container of information for design discourse.

It’s also a container of information related to business interests.
And this is where the challenge lies.
You’ll notice that in the photo, it looks like anyone can walk in...

But you see, it’s very symbolic.
Because maybe the powerholders of the hotel will be open to real design inquiry,
Or maybe they’ll slam the door shut.

How would you approach journalists and researchers that might be critical
about your design,
and in relation, your business?


Now below you see a beautiful photo of the hotel lobby... 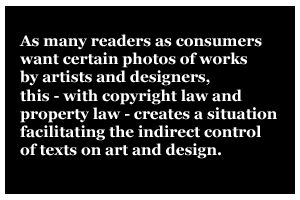 In my study, I investigated several issues through different frameworks,
concerning the construction of design texts,
which talk about this hotel.
This is where most readers internationally get their information. 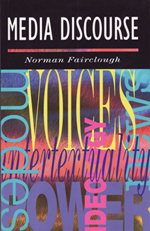 This book, influential in the communications field, was an important influence in my understanding about contemporary art and design texts.

Why did I choose Starck and the hotel?
Because certainly at the time Starck appeared to be the designer generating the most articles and news coverage.
And so, the text samples would be in their fullest form,
Contemporary, and
Multiplying into all kinds of media outlets.

And by using critical media discourse analysis—
in a way specific for interior design,
I thought this might explain why Starck was so successful,
Or at least why he was so visible.

In my research, I also interviewed a number of people who criticized the hotel.
They mainly criticized Starck and also the design.
Some sources were, in fact, rather knowledgeable and rather critical.
In fact, at times the knives were definitely out.


This created a challenge when dealing with this very critical information.

You see,
I had already had some experience publishing articles in magazines,
Under a Scottish editor with a lot of experience.
He used to say things like "avoid this" and "Certainly don’t do that."

So, I was wondering if this rather interesting, but rather critical information about Starck needed to get cut out of my academic dissertation, and how to go about it.

I had also read McNae’s Essential Law for journalists, a standard text in the UK.

But I was thinking: I’m not being a journalist, I’m writing an academic dissertation. Isn’t academia different?

I also knew that I was working on a rather unique case study.
And I felt my work might be influential in providing insights into the writings on Starck.

This would be achieved by focusing on the media coverage context of the publications.

So, then I called a friend, who is a lawyer working internationally, and based in North America.

Everyday he works on copyright issues.
He says people usually come to him AFTER they have a problem.
It’s only the very few that come to him BEFORE there might be a problem.

Whether you are being a journalist, or being an academic, it doesn’t matter.

The next step was, well, maybe that’s in Canada and the U.S.
But everyone I know in the UK thinks it works differently here.

So, I decided to make some phone calls—and find out...

Now, I’d like to show you some photos of my dissertation. 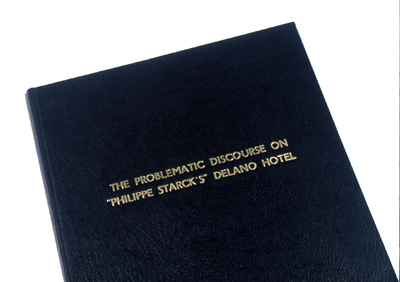 And on the page after the abstract, you see this at the top: 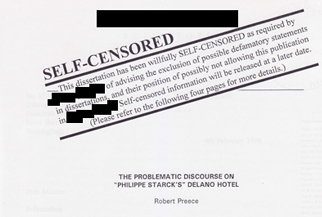 This is from the title page.
You’ll see above that I’ve printed: Self-censored.
“This dissertation has been willfully SELF-CENSORED,
as required by [the university’s] position of advising the exclusion—
of possible defamatory statements in dissertations... et cetera.”

Next, you’ll see the following page of my dissertation. This is the first page of a three page letter to the university’s Secretary and Registrar, which was sent on to me.

The solicitor writes, regarding dissertations:
“The normal principles of defamation law will apply,
and there is no special exclusion, in respect, of academic works.” 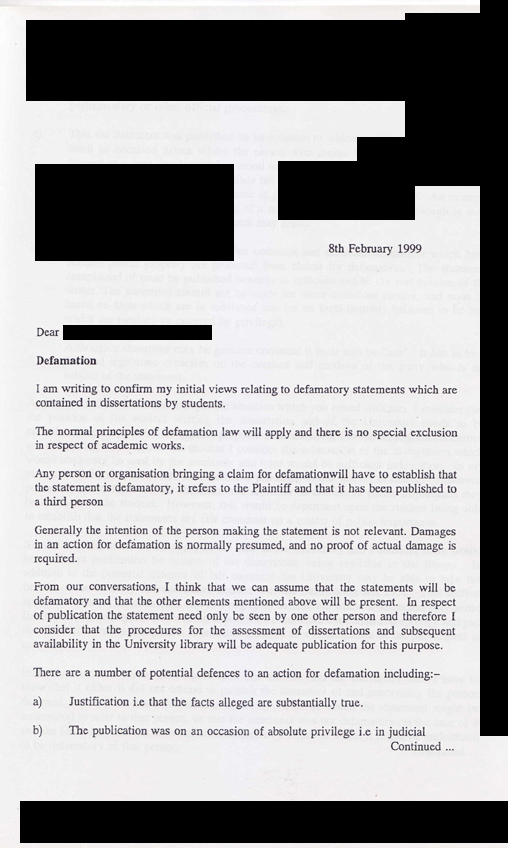 Now comes the university’s letter I received.
The Secretary and Registrar writes:
“There are two separate acts of publication—
and two potential sets of liability.” 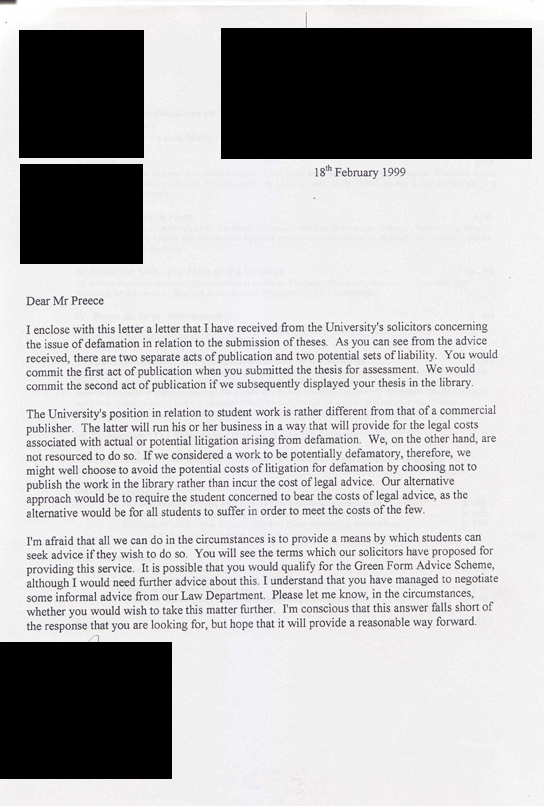 This created a problem,
for writing a truthful context about the hotel,
that is, how this academic saw it.

But some of the contextual information—
gathered from key sources,
could arguably affect good reputations—
and business activity.