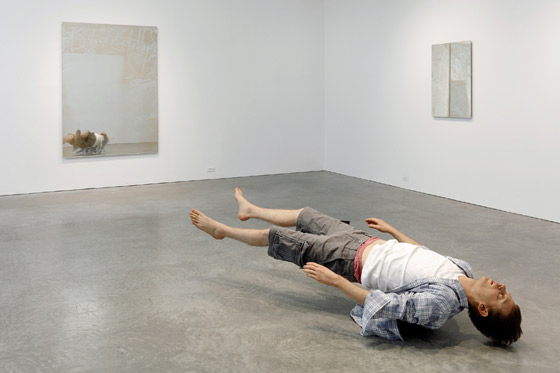 It is with great pleasure that ARoS announces the most wide-ranging solo presentation so far of the New York artist Tony Matelli (b. 1971) with the exhibition Tony Matelli – A HUMAN ECHO. 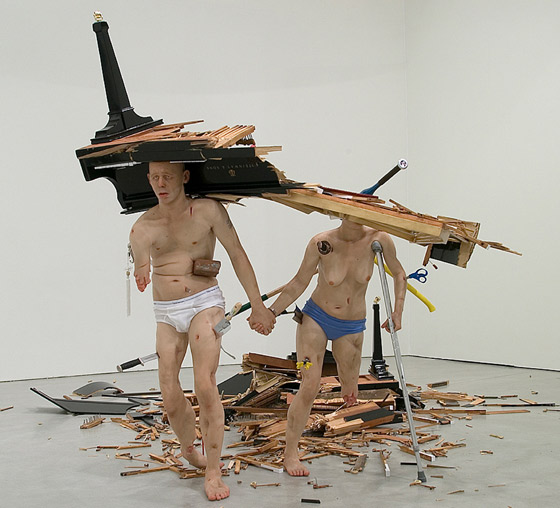 Visitors to ARoS have for several years been able to experience Matelli’s art, as he has occupied a prominent place in the museum’s collection of contemporary art with his controversial installation F***ed (Couple), 2005 – the devastated couple who have got a Steinway grand piano on their heads.

The exhibition Tony Matelli – A HUMAN ECHO displays Matelli’s artistic oeuvre and his special imagery in its full glory. It presents works from the latest 15 years of Matelli’s career and focus particularly on his artistic development, which has moved from macabre self-portraits created of meat and vegetables via absurd presentations of monkey and Man to subdued interpretations of mankind’s traces and litter. [...]

With his realistic figures, Tony Matelli is a principal exponent of the further development of the American sculpture tradition. Starting out especially from the Western European history of art and its existential and philosophical thematic complexes, Matelli reinterprets the condition of human life – not least in his series of modern vanitas motifs, which in their interplay of humour and horror remind us that the days of mankind are counted.

In Tony Matelli’s earlier career it is the human body – or the monkey as a symbol of mankind – that is interpreted and reproduced in various contexts. In his most recent installations, however, both mankind and animal have abandoned the stage and left behind only fleeting traces in the form of impressions in the dust, empty beer cans or cigarette ends. Nevertheless, the title of the exhibition – Tony Matelli – A HUMAN ECHO – emphasises that it is mankind – present or absent – that constitutes the essential starting point for Matelli’s artistic universe. This creates a link between Matelli and large areas of the permanent collection in ARoS that can be activated via the app installed in the exhibition to iPhones and iPads. 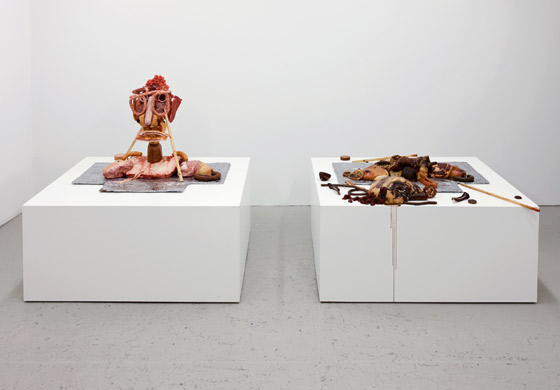 In the realm of Tony Matelli figures, the order of the day is determined by the imperfect human being. The artist’s striking use of sarcasm and inverted ideals of beauty puncture mankind’s lofty understanding of itself and bring a smile to the lips. This relationship is clearly expressed in works such as the sculpture Total Torpor, Mad Malaise, 2003, in which a naked, deformed male figure ravaged by boils smiles condescendingly to us from his podium. The work reeks of irony with Matelli asking us to take a critical look at ourselves, our habits and the culture around us.

In the sensational installation Old Enemy. New Victim, 2007, Tony Matelli reveals the disturbing aspects of mankind and human society. Here, we come across the rare sight of a hopelessly obese gorilla that has been overpowered by two starving chimpanzees. The statement implicit in this work, which turns our traditional concept of our surroundings upside down, is typical of Matelli, who in several of his installations takes the theme of the unpredictability contained in mankind’s struggle for power both physical and psychological.

Whereas in the introductory section of the exhibition Tony Matelli – A HUMAN ECHO we view the artist’s detailed interpretations of the human body and the monkey, it is in the final part of the gallery that the viewer’s own body is in the firing line. Here we see a series of dusty mirrors that catch our eye and retain our own body as the central feature in the art. In the early mirror works the actual motif is a play on words or a pastime in the form of games of noughts and crosses, while in the most recent mirrors there is a brief suggestion of a human hand, shoulder or finger drawing a quick line in the dust. The message remains the same, however: "Mankind has been here". 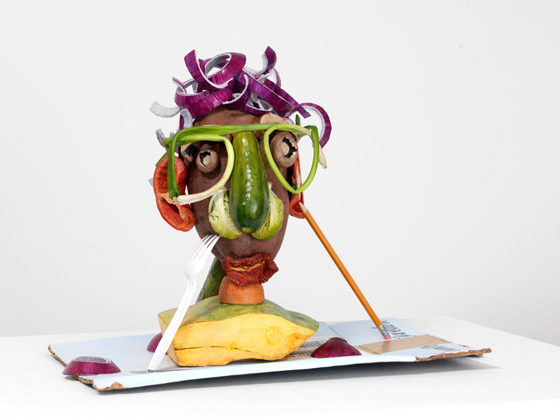 Tony Matelli’s world of images is filled with recognisable motifs: the bunch of flowers, the human body, money and mirror. But we are constantly being filled with doubt as to what is going on when things are transposed and Matelli invites us in behind the polished facade of humanity.