The Opiates “Hollywood under the knife” featuring Wolfgang Tillmans (2011) 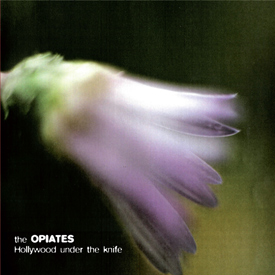 
The Opiates is the latest project from the "queen of electronic soul" Billie Ray Martin, together with Norwegian musician Robert Solheim. Already dubbed by the press as ‘The Carpenters of Electro’, their album Hollywood Under The Knife explores paths pioneered by the Chicago house and Detroit techno heroes, (not least Electribe 101), with the aim of taking things forward a step or two. Although Kraftwerk and Yazoo have been mentioned as influences, The Opiates’ unique brand of electronic music is not readily categorised. Theirs is a pursuit without compromise; a rare match of songwriting and cutting-edge beats and bleeps.

RAINY DAYS AND REMIXES: EP
Prior to the release of the album comes the digital release of the Rainy Days and Remixes EP on 19 September. The EP includes exclusive remixes of three of the album’s songs by Kim Ann Foxman (Hercules and Love Affair), the legendary Chris and Cosey (Throbbing Gristle) and XHK, plus the single “Rainy Days and Saturdays”.

HOLLYWOOD UNDER THE KNIFE: CD & DIGITAL ALBUM
Hollywood Under The Knife is an album of real substance, both musically and visually. Artist Wolfgang Tillmans supplies nine previously unseen and unpublished images for the album cover and booklet. Each song on the album portrays another social ’misfit’. Characters who, trying to change their outer appearance or tweak their behaviour, believe they might just fit and ultimately face the consequences:

> The woman who employs strange sexual fantasies involving the TV series CSI, to keep the boredom of life at bay. (Candy Coated Crime)

> The transvestite (Candy Darling) who, although leading the wild life and preparing for a sex change, dreams of married life and a house in the suburbs. (Rainy Days and Saturdays)

> The young wannabe actress in L.A. who reflects on her facial surgery that has left her scarred and punctured with holes inside and out. (Anatomy of a Plastic Girl)

> The fifteen year old girl who wanted to be herself, but gets voted off the reality TV show ’Make Me A Supermodel’ and who is so destroyed that she believes her life is over at the age of fifteen, because they told her it was. (Reality TV)

> The same woman who suffers from insomnia and tells the story how the demons of her soul and the demons of the night keep her awake. (Silent Comes the Nighttime)

> The man who dresses up in women’s clothes (Roman Polanski in ’The Tenant’) trying to fight the people he believes want to kill him by convincing him that he is Simone Choule, a woman who committed suicide in the apartment that he now rents. (I’m not Simone Choule)

The Opiates: “Hollywood Under The Knife”

COVER AND BOOKLET:
Turner Prize winner Wolfgang Tillmans (famed for his sleeve design & videos for Pet Shop Boys, REM, Goldfrapp ...) is a long-time fan of Billie’s work. He has photographed her twice and chose her as ‘most influential woman’ as part of i-D Magazine’s 25th birthday issue and celebrations. For ‘Hollywood Under The Knife’, Wolfgang opened his entire archive and gave The Opiates unprecedented access to choose their favourite images.

INTERVIEWS:
Billie Ray Martin lives in Berlin and is available for interviews.

BILLIE RAY MARTIN
Dubbed the "queen of electronic soul", Billie Ray Martin first came to prominence leading the acclaimed deep house act Electribe 101, her unique voice hitting both the house scene and the charts with a strong infusion of soul. Electribe 101 scored a brace of hits including the classic "Talking With Myself" before Billie departed to continue exploring fusions of electronic music, pop and soul. After releasing the thoroughly scary "Persuasion" with Spooky and the monumentally beautiful "Four Ambient Tales" with The Grid, Billie found herself with a worldwide number 1 in "Your Loving Arms"; now considered one of the all-time classics of dance music. Three more hits and the album "Deadline for My Memories" followed.

Since then Billie has worked with Ann Peebles, Carla Thomas and members of Aretha Franklin’s band on her album "18 Carat Garbage", and has continued to release cutting edge electronic productions, including hit collaborations with DJ Hell and Slam and solo releases such as 2008’s "Undisco Me" which hit the top spots in the UK and US dance charts.

Billie’s epic "Crackdown Project" released in 2010, featuring her takes on the Cabaret Voltaire’s classic album "The Crackdown", reinforced her unique position as an artist who appeals to the both ueber-cool mags like Flux Magazine, Wound and The Wire as well as the pop mainstream achieving ’Song of the Day’ status at Popjustice. 20,000 downloads in a matter of days, plus overwhelming press and DJ feedback confirmed her vision.

Already in 2011, Billie has released the solo single ’Sweet Suburban Disco’ with mixes by Vince Clarke of Yazoo fame amongst other dancefloor greats, with the world’s key DJs from Black Strobe to John Digweed giving it full support. Released on Billie’s Disco Activisto Records.

Also currently out and in the Music Week Cool Cuts Charts at Number 14, is the ‘Sold Life’ E.P. by Billie Ray Martin and Hard Ton. Back to Billie’s old school house roots, it’s creating a serious buzz, charted by everyone from Laurent Garnier to Kim Ann Foxman from Hercules and Love Affair.

Billie is currently working on her next solo album and DJs around the world with growing success.

ROBERT SOLHEIM
Born on Averøy, a small island on the west coast of Norway, Robert Solheim grew up between the sea, the mountains and music. At a young age, he started to play the organ, progressing through drums, keyboards and singing in various bands, until he discovered a synthesizer named Jupiter-8 and started to compose his own work. Under the name CURRENT he has released several downtempo and ambient-techno albums on Origo Sound, the famous Norwegian label home to artists Biosphere and Erik Wøllo. In 2005 he started releasing material on his own label CURRENTMUSIK. All his releases have been described as extraordinary creative works by the critics. In 2006, his album ‘underCURRENTs’ was nominated as best album and in 2003, the track ‘Ghost Trip’ from the album ‘Communion’ was voted by the public number 7 of the 100 best electronic tracks of all-time placing Robert alongside such names as Kraftwerk, David Sylvian and Underworld to name a few.

Lately his creativity has turned more towards electronic music for clubs and dance-floors which has lead to several EPs with deep tech house and techno, supported by the likes of Lukas Greenberg, Rob Maynard, Danny Graham, Paco Osuna, Richie Hawtin, Luca Doobie, [etc.]

With the American composer Michael Snyder (Eidetaker) Robert formed AQUAVIT, a musical project which works on finding the harmonies between electronic and acoustic sounds. Their first and much anticipated work together ‘Telapatia’ was released in 2008 applauded by both press and public alike. Critics described it as “electronic music for the well-travelled”. AQUAVIT served as the foundation for the Norwegian label AQUAVIT RECORDS, established to release quality electronic music without restrictions.