In direct response to troubling times and the current exhibition Ready for War, Illinois State University Galleries is pleased to present an “alternative view”— with an installation by Kim Min Su (b. 1966). For this special event, Kim enables art visitors to simulate the role of White House press relations strategists. With this interactive art-game, players try to balance the official language for (a) effective responses to fictional events and (b) to maximise special interests, while aiming to secure at least a 49% public approval rating upon the eve of an upcoming Presidential election. Critically acclaimed and widely popular, Team Bush Media Stimulator has previously been travelling up and down the American West Coast. 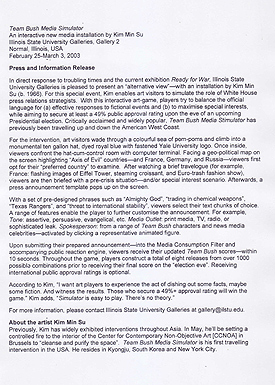 For the intervention, art visitors wade through a colourful sea of pom-poms and climb into a monumental ten gallon hat, dyed royal blue with fastened Yale University logo. Once inside, viewers confront the hat-cum-control room with computer terminal. Facing a geo-political map on the screen highlighting “Axis of Evil” countries—and France, Germany, and Russia— viewers first opt for their “preferred country” to examine. After watching a brief travelogue (for example, France: flashing images of Eiffel Tower, steaming croissant, and Euro-trash fashion show), viewers are then briefed with a pre-crisis situation—and/or special interest scenario. Afterwards, a press announcement template pops up on the screen.

With a set of pre-designed phrases such as “Almighty God”, “trading in chemical weapons”, “Texas Rangers”, and “threat to international stability”, viewers select their text chunks of choice. A range of features enable the player to further customise the announcement. For example, Tone: assertive, persuasive, evangelical, etc. Media Outlet: print media, TV, radio, or sophisticated leak. Spokesperson: from a range of Team Bush characters and news media celebrities— activated by clicking a representative animated figure.

Upon submitting their prepared announcement— into the Media Consumption Filter and accompanying public reaction engine, viewers receive their updated Team Bush scores— within 10 seconds. Throughout the game, players construct a total of eight releases from over 1000 possible combinations prior to receiving their final score on the “election eve”. Receiving international public approval ratings is optional.

According to Kim Min Su, “I want art players to experience the act of dishing out some facts, maybe some fiction. And witness the results. Those who secure a 49%+ approval rating will win the game.” Kim adds, “Simulator is easy to play. There’s no theory.”

About the artist Kim Min Su
Previously, Kim has widely exhibited interventions throughout Asia. In May, he’ll be setting a controlled fire to the interior of the Center for Contemporary Non-Objective Art (CCNOA) in Brussels to “cleanse and purify the space”. Team Bush Media Simulator is his first travelling intervention in the USA. He resides in Kyongju, South Korea and New York City.