The upstart English artist takes on Cosey Fanni Tutti, the "mother" of Art Design Publicity magazine. Will this latent artwork be activated into a performance of legal-oriented publicity, and if so, how far will it go?

First, please pause for a moment and pay tribute to the 1976 exhibition Prostitution at the ICA featuring Cosey Fanni Tutti and COUM Transmissions. As everyone knows, or should know, this project featured shock art and whipped up a spectacular media frenzy and discussion across UK media...

Now onto the upstart plagiarist Stewart Home, and his "artwork", Prostitution II. Please note, out of school-boyish respect to our magazine’s "mother", we will not show installation details apparently of our Cosey at this time (and no, we will not link to them, sorry...) 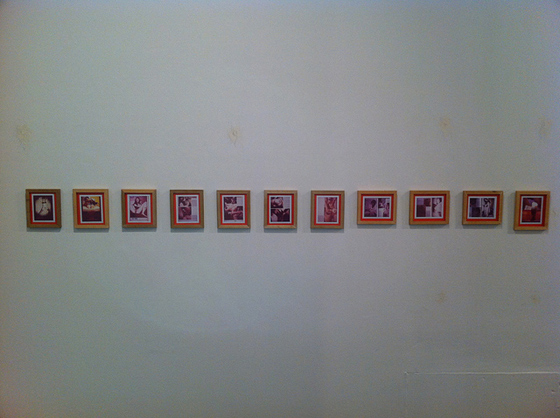 Over the years, Stewart Home has developed a practice across [insert different media] approaching content including [various] and subjects like [say something witty here]. Previously he’s done [this and that] and exhibited at [fabulous space A], [B] and [C - end with space most known by the masses].

Now onto excerpts of my interview of artist-provocateur Stewart Home.

Stewart Home: Yes, the images are of Cosey. They were taken from the magazines. A friend of mine researched all this stuff and so he had the magazines. And I made use of his research.

It is my understanding that he bought the magazines himself...

Stewart Home: An art critic was developing a kind of silly argument about what he wanted to term as "new British art" as opposed to yBa. He wanted to posit his reaction to, kind of, feminist propriety in the art world in the 1970s. And I just didn’t think the argument he was making worked.... [as well as a certain argument for "new British art" at that time (SH becomes a bit incomprehensible here)].

[In response], I wanted to not just keep my response as text, but also to make a work to illustrate what I was saying. So I made the series and I initially showed them in London, Matthew Higgs showed them, and shown in other places in 1996 to make this point.

Matthew, who is now the director of White Columns, wanted to do a kind of retrospective. He has an incredible memory and asked if I still had this piece, and I did.

R.J. Preece: Has it been sold yet?

Stewart Home: No. Someone did express an interest but I didn’t want to sell it as I’m going to do the show again in London in April or May [2012].

R.J. Preece: Can you give me two sentences about why you made this work? You made it in reaction to a statement or position by John Roberts & company...?

Stewart Home: Yes. Because I thought they were kind of talking complete nonsense when they suggested they had kind of seen 70s art was kind of all...

Stewart Home: Characterised by feminist propriety. You know, you could have taken other artworks but I wanted something specifically British and I obviously didn’t want to use Pauline Smith because I don’t particularly like her politics...

So it was taking ideas about Post-Modern appropriation and kind of using it straight. Obviously I’ve done a lot of work about plagiarism and work around how I disagree with copyright. I also have a lot of problems with obscenity laws.

It was interesting when we were sending them to the States. While I think the work is probably legal once inside the States, it’s often a problem with taking stuff across borders.

Yeah, I think it’s interesting that it raises all those questions.

R.J. Preece: So you consider these issues as part of this work?

Stewart Home: Oh definitely they are part of the work. And while I’d rather just be able to show the work I want to show, if you should then encounter a legal problem, then that would become a part of Prostitution II.

And it would help publicise the work.