Dutch artist Silvia B. creates striking figures that cross the boundaries of gender, species, and age. Beyond their high-fashion gloss, however, her hybrid beings aim to question constructions of beauty and value. Silvia B. has had various solo exhibitions in the Netherlands, at venues such as 5-MM, the Five Minute Museum in Eindhoven (2009), and GEM, the museum for contemporary art in The Hague (2008). She has also participated in a number of group shows in the Netherlands and around the world, in such cities as Oslo, Antwerp, Nice, Milan, and La Paz, Argentina. She served as curator for an international group show at the Rotterdam Historical Museum (2007), and for 11 years, she was the co-director of the smallest museum in the world, the Museum Van Nagsael, which was purchased in 2008 by the Museum Boijmans Van Beuningen in Rotterdam. 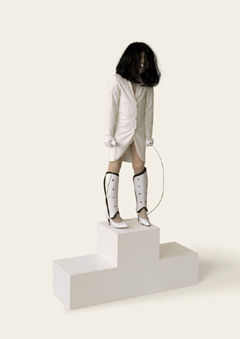 R.J. Preece: Ira jr. and many of your other recent works show your continued fascination with crossing gender, species, and age, combined with an interest in polished-looking, fashion-plate figures. What keeps you interested in these topics?

Silvia B.: I’m interested in ambiguity. I like to make these hybrid beings, because I hope that they will bring viewers to a state of doubt. I consider this to be the most important state, because it is where rethinking starts. I’m also interested in fashion-oriented topics. I find fashion to be the most direct reflection of our times. Through our appearance, we show how we relate to this world, as you can see in sculpture through the centuries. I don’t aim to make my sculptures “timeless”— I definitely aim for the here and now.

R.J. Preece: You included a reference to Cindy Sherman’s photograph Untitled #122 (1983), and I understand that this was your starting point for Ira jr. Could you tell us about that?

Silvia B.: That photo by Cindy Sherman was a very important icon for me back in the 1980s, during my academy training. I found the art world to be quite male-dominated and was confronting gender issues. Sherman shows a blonde woman trying to make her stand in a man’s world. She wears a black, coat-like dress, a female translation of a man’s power suit. Apparently she is not completely coping: she is portrayed at the moment of some sort of breakdown.

Silvia B. (continues): My goal was to refer to this beautiful photograph and take the presentation in a new direction by looking again at gender and also at age. I reversed the image in different ways and played with the roles. First the sculpture is a male child dressed up in grown-up clothes, and the black and white outfit of Sherman’s woman is reversed. Then I gave him different elements in order to play with roles further. With a dress, he also wears a martial arts groin cup. With his high heels and silk stockings, he wears shin guards. Under his mouth gear, we can see beautiful red lipstick. His little hands in grown-up gloves hold a girl’s skipping rope, and he combines a girlish hairdo with a moustache. You’ll also see an embroidered sports badge on his sleeve. This shows the number of Sherman’s untitled photo in reverse, as a more direct reference.

R.J. Preece: The winners’ podiums seem a new element in your work. Why did you add them?

Silvia B.: Before, my sculptures of human beings stood directly on the floor, placed in our reality. In comparison, I find that a figure on a podium is more “exhibited.” The viewer relates differently to the figure. He expects a story, and the podiums suggest that the elevated figures have won whatever the game is— it emphasizes a “mood of battle.”

R.J. Preece: I have to ask, to what extent are these works autobiographical? 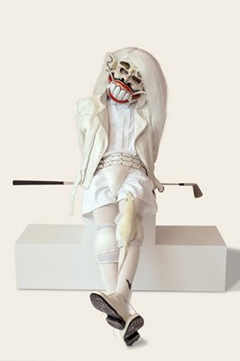 Silvia B.: They’re autobiographical in that I’m attracted to people who do not fit in. A physical or mental abnormality— or an unusual way of dressing up— pushes a person into another world. These “misfits” challenge society’s norms, and I find beauty in that, maybe because I am a bit of a misfit myself. From the early ’80s, when I joined the Punk movement for a while, I have had this dandy-like urge to dress up with full make-up. People respond in very different ways, and this has made me think a lot about human behavior.

R.J. Preece: I find Lord Rangda to be attractive and repulsive at the same time.

Silvia B.: That is the state of doubt in which I’m aiming to position the viewer. Real beauty is always pretty and ugly at the same time.

R.J. Preece: If you had the power to make viewers walk away from your work with one new thought, what would that be?

Silvia B.: I’d like them to walk away with some doubts about instinctual behavior— for instance, our tendency to follow the herd.