Sebastian Freytag: Repitition as an attitude (2013) 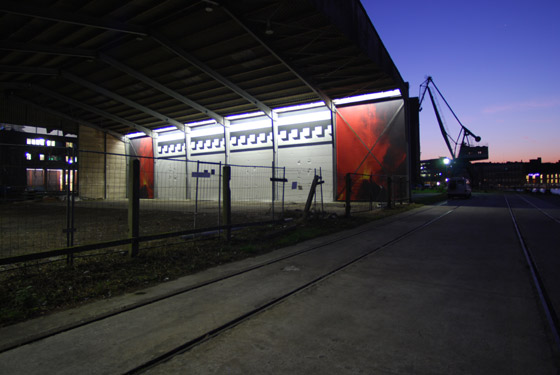 Lars Breuer and Sebastian Freytag. Weltlandschaft, (2009). Digital print on outdoor foil, acrylic on wall; 800 x 7000 cm, Empty building in the harbor of Münster, Germany, 2009. Artwork part of Over & Out exhibition. All photos courtesy of the artist.

Sebastian Freytag: Repitition as an attitude

Sometimes artworks seem to come out of nowhere, catch your eye and make you rethink things. Such was the experience I had with Sebastian Freytag’s works. They are generally defined as engaging in “repetition as an attitude towards the history of art as well as a compositional method”; a decision to “quote from former works rather than pursue the elusive ingenious and unique work of art”, using “offset printing as an artistic element aiming ‘as a way to reduce hierarchy in compositional elements and nearly to avoid traditional artistic decision-making all together”. Sebastian Freytag doubts the “artist as a solitary genius” and also enlarged his practice by co-founding the artist collective Konsortium, as a vehicle for expression, with artists Lars Breuer and Guido Münch in 2004.

Based in Dusseldorf, Freytag has exhibited works as a solo artist and as part of Konsortium extensively in Germany, and also the Netherlands, Great Britain, Australia, Finland, Belgium, the United States, Turkey, Austria, Switzerland, France, and the Czech Republic. In addition to exhibiting at certain museums and art centers, he’s installed works on former department stores and in a tax office, in shop fronts, billboards in the landscape and under bridges, in parking garages and public parks and on/in abandoned industrial buildings.

The following are excerpts of my conversation with Sebastian Freytag: 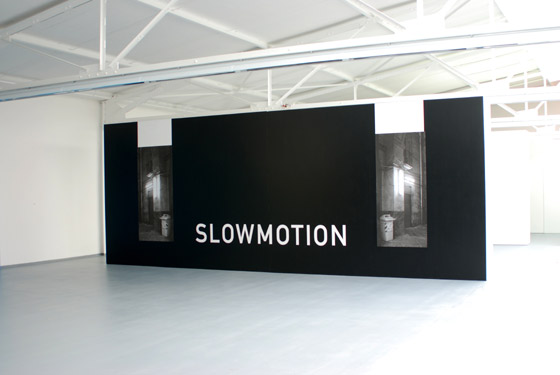 R.J. Preece: You’ve characterized your practice as engaging in “repetition as an attitude towards the history of art as well as a compositional method”. Could you explain?

Sebastian Freytag: While studying at the Kunstacademie Düsseldorf I was deeply affected by looking at historical art. I spent a lot of time visiting museums and traveling through Italy and France. As a result of these overwhelming experiences with the history of art, I wanted to repeat what I had seen and noticed. I didn’t have any idea how to compete with these works, nor did I have the skills to do so. So I simply pointed out what I saw and tried to use simple images of these things as my source material. If you look at Stardust (2005), this is an early example where I placed decorative elements onto canvases onto a monochrome wall. There’s also “STARDUST” repeated on poster prints, referring to the now former Stardust casino in Las Vegas, which had impressive neon lights. All these elements are more or less commonplace in Postmodernism. 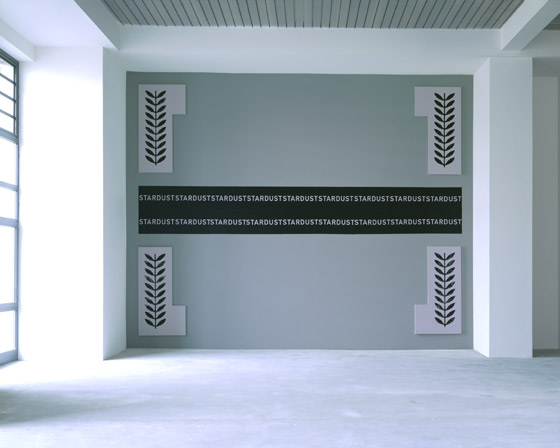 I had the impression that works of art only succeed in the art world when they are eccentric in terms of content and composition. People try to make work in a way that it looks new, unexpected, exciting and therefore they play around with different materials and try to find the right balance. I ended up rebelling against this approach and tried to reduce my techniques to a very simple level. The first thing I did was to put sketches and found images on the Xerox machine and copied them. The equivalent composition method to the Xerox machine was the serial structure. I think you can describe my practice as a result of a conflict between this strong nostalgic admiration of old art and the incapacity of doing it in the same way again. 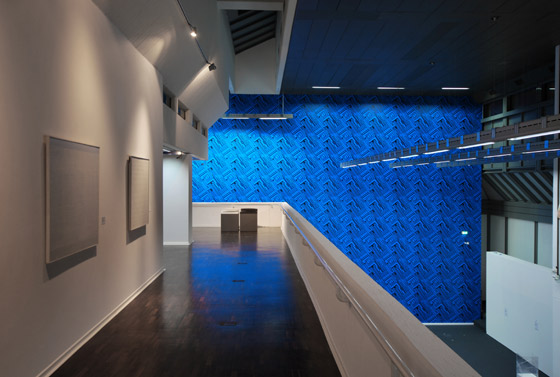 R.J. Preece: Could you explain your method(s) of appropriation?

Sebastian Freytag: “Quoting art works“ is how I would describe my method of appropriating former works and positions. One example is the work Monastery Garden invers (2011). I made it for an exhibition at Wilhelm-Hack Museum in Ludwigshafen. In the work, I quoted a painting that the museum owns by Günther Fruhtrunk. I quoted the composition and inverted the colors, so red turned into blue and white into black and then I used it as a pattern for three wallworks in different locations. 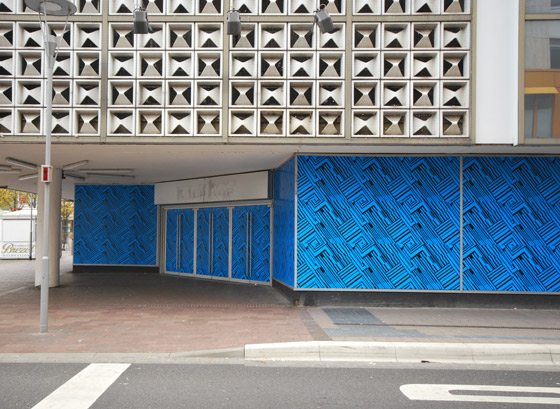 R.J. Preece: You’ve stated that your usage of utilizing offset printing as an artistic element aims “as a way to reduce hierarchy in compositional elements and nearly to avoid traditional artistic decision-making all together”? Please explain.

Sebastian Freytag: I fear uniqueness. And I thought a copy is a very contemporary element of our society. As an artist you always struggle with a budget. I couldn’t compete with these gigantic art productions out there, and I didn’t want to. I was looking for a tool that allowed me to work in large scale but still kept cost very low. The offset print was a perfect solution. It is less precious, very common and easy to handle.

The exact repetition of the offset prints, and the common use of it as public advertising, leads to simple solutions in composition. I used the prints as I got them from the printer and started to glue them onto the wall, one next to the others in simple additions. I noticed that this wasn´t the appropriate way artists in the academy thought about composition. But, for me, it opened up a way of rethinking the traditional procedure where you try to position elements according to a hierarchy. 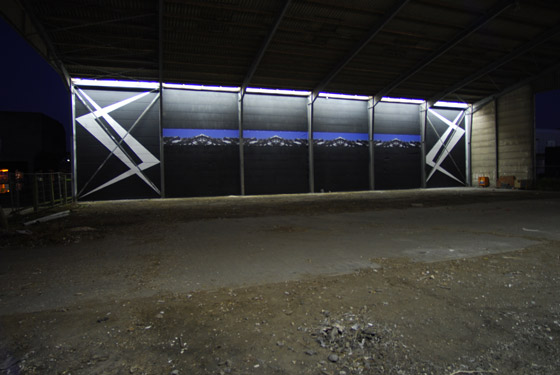 Lars Breuer and Sebastian Freytag. Weltlandschaft, (2009). Digital print on outdoor foil, acrylic on wall; 800 x 7000 cm, Empty building in the harbor of Münster, Germany, 2009. Artwork part of Over & Out exhibition.

R.J. Preece: Was painting your starting point? What made you move towards more 3-D oriented installations?

Sebastian Freytag: In fact my initial desire to make art was driven by a two-fold passion: one for painting; the other for architecture. I decided to study painting because I thought it would allow for much more freedom. Through traveling and research, I recognized that painting had a strong link to architecture, Italian Renaissance frescoes for example. I started to think about my paintings as creating a union with walls and surrounding spaces rather than remaining a design limited to its frame.

So I concentrated on site-specific paintings and, thinking about the tradition of fresco, I developed wall works. My next step was into the public space in about 2007, where my source material— the offset print— finds its common use and where I was able to work in contrast with architecture of different sorts. 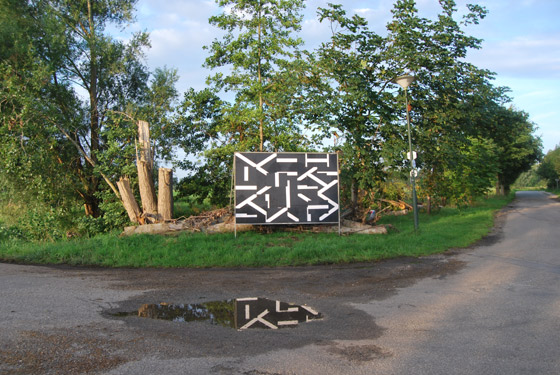 Sebastian Freytag. Meander (detail), (2010). Eight billboards comprised of 25 offset prints each utilizing four different offset print designs. Weekly, over a period of a month, additional print copies were put on top of the others every week changing the composition. Three billboards installed around Castle of Ringeberg and five at streets entering the village (like here), which is in the city of Hamminkeln, Germany.

R.J. Preece: What are some of the challenges and rewards of working with repeated, multiple works like the ones you installed in the Venlo area and also in Hamminkeln, Germany?

Sebastian Freytag: As I noticed that every work of art is conditioned by its surrounding – by the architecture, the city, the institution, the audience, etc. – I used these elements to confront and energize my works with it. When for example I positioned eight billboards in Hamminkeln, I chose the positions in order to find eight different backgrounds for my work.

By positioning the works in front of a specific landscape or piece of architecture, like I did for example in Venlo, I also highlighted these locations and made people aware that these are in fact remarkable places or buildings. I like the idea that looking at all the different locations of these works creates a kind of navigational map and story line in your imagination. 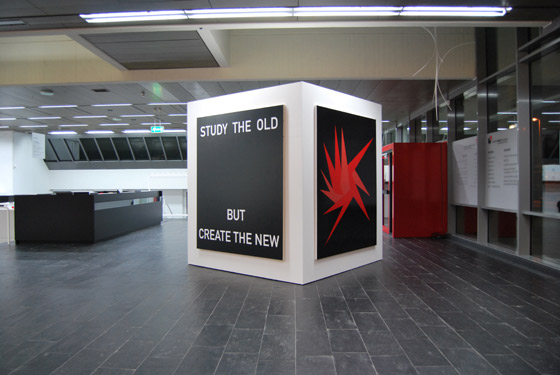 R.J. Preece: What exactly is “Konsortium” and what are the different ways that you work with the other Konsortium artists?

Sebastian Freytag: For a long period, Konsortium was only a name for a project space that we ran in Düsseldorf. We invited artists with the idea of bringing together artworks and artists that we felt are artistically related to each other and to our own approach, which included the idea of inventing a new art movement or style, and playing with that, and critiquing it. By working together on this project space we also got invited to curate shows. Out of all these activities and discussions about art, artists and different approaches towards artistic ideas, we increasingly arranged our art works when we showed together as one coherent installation. Our shows together expanded to “total installations”, and we worked together as a group to make the artworks. We now use Konsortium as an artist group to achieve a higher complexity and density in our installations and shows. 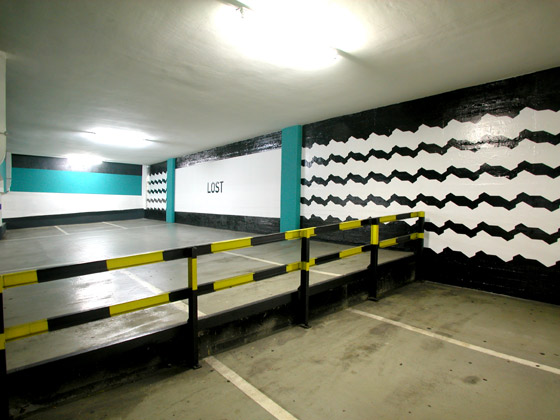 R.J. Preece: What have been your favorite sites that you’ve installed work in?

Sebastian Freytag: My first intervention in a parking garage in 2007 in the Kunsthalle in Düsseldorf was a very satisfying experience. The show was independently organized by Konsortium and emphasized the structure’s strong Brutalist architecture. I always loved this architecture and in the garage this kind of Brutalism fulfills its ideal perfectly. The opening there, during a Blinky Palermo retrospective, was an exhilarating moment.

Another of my favorite sites was the old department store. The facade links back to a serial structures pattern invented by architect Egon Eiermann after the Second World War. It once represented efficiency and clarity with a strong expression of belief in the future. Now this department store in Ludwigshafen is empty and represents also, to me, the failure of Modernism. It can be read as a contemporary interpretation of a romantic image of a ruin.

R.J. Preece: Which artists work have you found most influential to your practice, and why?

Sebastian Freytag: When I was 15, I saw an American art exhibition in Berlin, where I first saw the whole history of Abstract Expressionism and Pop Art. I didn’t really understand anything at the time but it was impressive and it stuck with me. Before I studied at the Academy, I also saw a Ford Beckman show and a Felix Gonzales-Torres retrospective. I guess that these shows convinced me to study art. Later on, the friction between the Italian Renaissance and Andy Warhol fascinated me very deeply. It still activates my imagination: thinking that historical art may be abstract art at the same moment.

R.J. Preece: Do you have a future art dream?

Sebastian Freytag: For art in general, I dream of a bigger independence from all social boundaries. Art should be able to engage with more sites than we think about now. We sell our cities only to commercial benefits. Instead of selling every square meter, we could start to imagine allocating more outdoor spaces for artists.