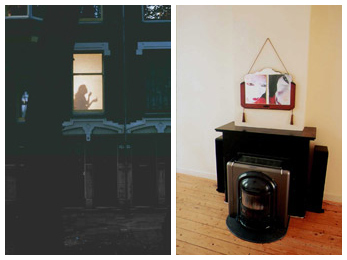 Ron Mandos galerie kicks off the fall art season with a solo, site-specific project by British-born, Amsterdam resident artist Lisa Holden. Entitled UNLEASHED, Holden has positioned the galerie interior, a former two-story residence, as a container of voices, memories, discourses, fantasies, and spirits— which the viewer experiences through sight and sound art: experiential voicescapes and sound, performance-installation, and digital photographs.

For UNLEASHED, Lisa Holden’s starting point is the site, a house built in the 1920s and survivor of the WWII Rotterdam bombing campaign, as a container of historical and personal events. She traces its former inhabitants— including two sets of older unmarried siblings— piecing together snapshots of their lives from official records and personal accounts. She then takes this factual material and combines it with “her conversations with the space”. The result is a blend of experiences across past and present, layers of fact and fiction, memory and fantasy.

New works exhibited include the interior-exterior Canvas (2000): viewed from outside, crisp shadows on a spot-lit, window-fitted canvas show Lisa Holden spinning the psychologies and costumes of the spiritual residents; from the interior hallway, viewers hear the ritual-performance of the unleashed energy behind a closed door— “things the residents don’t want to face, things the outsiders don’t want to know”. Her adjoining, two-room sound and voice installation is a multi-layered remix of the inhabitants secret discourses through time. In the galerie’s downstairs space, digital photographs are spiraled from the site, sounds, and spirits depicting bizarre portraits of "Ernie", "John" and "Betty" including Stuffed, Mattress, Suckling and The Seed series, consisting of the psychological core emerging "before and beyond the Bite"(of the apple in the Garden of Eden).

Lisa Holden’s previous work has explored the themes of the fluidity of the self, the blurring of fact and fiction and unseen narratives in the form of the artist adopting different characters as a means of exploring unfixed identities and realities which are endlessly manipulated and transformed. With UNLEASHED, Holden peels back the layers and intends to "resurrect the voices and ’reposition the characters’— adopt the former domestic interior as a site of an infinite psychological mindscape".

Previously, Lisa Holden has exhibited in a variety of group shows including Arti et Amicitiae’s Cos-Play, in Elastic gallery in Sydney, and at the Brussels Art Fair with Danielle Arnaud gallery, London. Concurrently with UNLEASHED, Holden is participating in British-Chinese curator Yuen Fong Ling’s surreal vision and “art-drag-design” show, Apocalypse Now and Next Week! at Manchester, UK’s Castlefield Gallery. This is R. J. Preece’s third curatorial intervention, following those at spaces in Bangkok (1999) and Hong Kong (1997). He is a Rotterdam-based independent curator and arts journalist. Images of UNLEASHED can be seen [on the gallery’s website].

For more information and requests for visual material, please contact: [...]