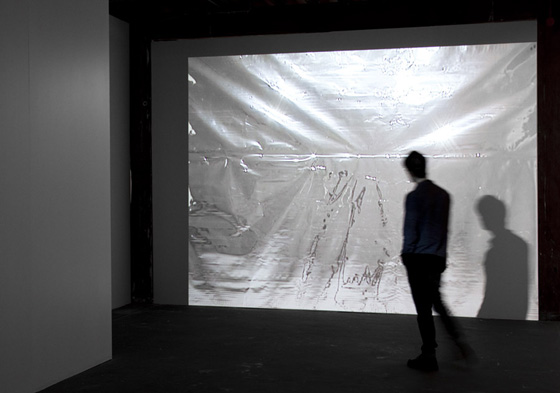 Düsseldorf artist Mischa Kuball has worked with light’s socio-political dimensions across a range of gallery exhibitions and public space projects. In Platon’s Mirror exhibited in Artspace in Sydney, Australia, Kuball draws upon one of the most influential stories within European literature: Plato’s allegory of the cave in Book 7 of The Republic in which the philosopher draws a distinction between two forms of reality: the reality of the visible world and the (true) reality of ideas. Kuball presents simple yet highly effective installations using projectors, silver foil, photographs and videos that create perceptual and experiential spaces analogous to that of Plato’s cave. In doing so he translates the complex relationships among light source, reflection, silhouettes, and representation into seemingly endless stages of mediation, within which reality is continually newly constituted as the reality of its reflection.

Mischa Kuball’s engagement with the allegory of the cave takes place in an era in which the problem of reality is barely considered in philosophical, sociological or political terms. The current fascination with the “performativity” of the real apparently neutralises the issue of what within reality might actually be considered “real’”. Kuball questions whether the problem of reality can so easily be discarded by declaring reality as only socially constructed. Questioning whether ratio and the intellect are still useful when it comes to comprehending a distinction between reality and apparition, Kuball’s work can not only be seen as an attempt at re-actualising Plato, but moreover as an attempt to question anew the classic connection between the metaphor of light and the idea of Enlightenment.

To learn more, Caraline Douglas of Artspace interviewed Mischa Kuball after the installation of Platon’s mirror.

Caraline Douglas: Can you tell me how Platon’s Mirror came about?

Mischa Kuball: Platon’s Mirror is a result of a conversation that began two years ago between myself, Blair French (Executive Director at Artspace, Sydney) and Leonhard Emmerling.

The debate derives and possibly departs from the question of how Plato’s allegory of the cave (which I consider to be quite important) is perceived in the Southern Hemisphere. That is really how this started. And that is also why this exhibition at Artspace, Sydney was accompanied by a symposium, at which the four keynote speakers all provided a contribution from an Australian perspective.

Caraline Douglas: As a result of that symposium, “Mirrors, Doubles, Shadows, Caves: Plato and Contemporary Art”, one of the ideas that emerged from these discussions examined the experience of space and the range reactions one could have whilst experiencing Platon’s Mirror. The actual artwork itself is composed of varying elements (from the projectors, to the framed images hanging on a wall), but to you is the experience of the viewer integral to the actual experience of the work? 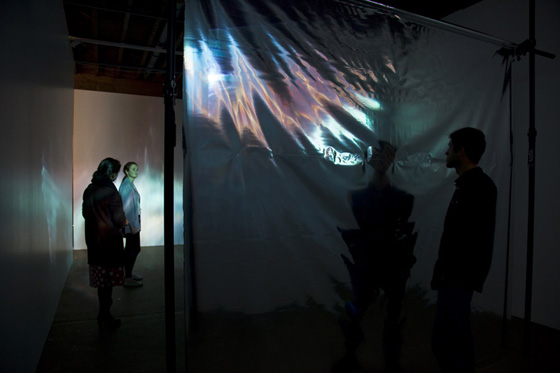 Mischa Kuball: I think that the reception to and perception of a space is always attached to cultural components. This contextualises what we think of and how we react to space.

But the idea for Platon’s Mirror is really that the body of the viewer is put into place as an actor. This viewer / actor, enacts and also does the work for or of the work of art. So, the artwork is a kind of constitution of prepositions such as a projection onto another projection, and then a reflection, and then a material display of what one could classify as photography, but the work really all comes into play when the viewer begins to interact with the work and these differing components in space.

I think that’s significant simply because when Plato wrote this allegory 2,500 years ago, he had in mind an elaboration and concentration of the status quo regarding what we would call the viewer (i.e., the regular population). In the case of Platon’s Mirror, it is an artist staging this experience. But during the time of Plato it was the philosopher who was privileged (at that time aural literature was held in the highest regard). So there was a different kind of perception of art at that time.

Caraline Douglas: Through this work, how do you propose to create a sensation analogous to that in Plato’s influential story?

Mischa Kuball: Our perception system is so based around and sensitive to the origination of and end of light. Most of us as humans are prone to tracking light and are attracted to images. When we look at the history and development of humankind and our brains as they operate within our anthropological system, we are attracted by and to light sources.

In this exhibition, we are confronted with this concept of a moving image and a moving shadow. That throws the work back to the question of what kind of image do we most relate to? What is the essence of this image? Is there any truth in this image? Can we believe this image, or should we be more critical of this image? And this work is also multi-faceted in that once you turn a corner, or turn around and look at the back of a work, one discovers that even the back of the work may be more intriguing than the front of the image. I think this is one of the key experiences one can have with Platon’s Mirror. 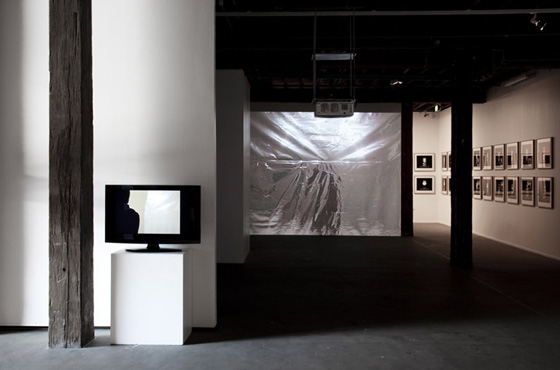 Caraline Douglas: As we discussed before there are several different elements to the work itself. Can you go into more detail about what we see when looking at Platon’s Mirror?

Mischa Kuball: Especially as this exhibition is travelling to different places, when we look at this work here in Sydney, we are reminded of the fact that a selection of these photographs were taken in Adelaide three years ago. When I looked at these images I discovered that there is a certain truth in this.

The first truth is that you are looking at something that looks like it is floating on the wall; it has a non-physical presence. The mirror is a physical component that reflects something kind of virtual (in a way). It reflects a space that we do have words for yet we cannot prove this physical presence inside the mirror, except through the destruction of the physical mirror (which is a delicate subject as well). But at the same time we are looking at these objects on a wall and we think that maybe it is some form of a communication tool. In fact it is an apparatus that acts as a self-portrait of, let’s say, the soul of an object that produces images. It is quite complicated and complex. It works as a kind of appetiser. It would be really easy to say “yeah I get it; it is photography”, but it doesn’t exist as something “true”; it is on the way to becoming true. It is also involving a process, a sequence of experiences, until one finds that it is not about what I see, but about what it can be turned into. Like a higher or more truthful truth.

I don’t know if that concept exists, but it is what I am trying to bring about through this work. And, just as we explored in the symposium, the work creates many questions; it does not reveal the secret; it does not give the answers. But that is what I think is the role of the artist.

In terms of speaking about Plato’s allegory of the cave, we are the light and light comes from the art, a shadow comes from the art, and then the viewer has to interact with the work. The shadow is seen in the work itself, but then actual shadow is projected onto the work through the physical presence of the viewer in the work. This goes back to my first experiences of the work of Bruce Nauman when he was questioning so-called body consciousness in his work. 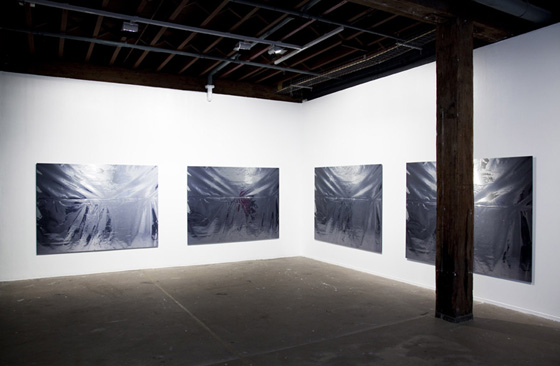 Caraline Douglas: So from this work, are you hoping that people will come away with questions and reflections?

Mischa Kuball: I know that most of the time people often walk away from a work of art with questions searching for a proper answer, but I think that the answer can often be the end of the exploration and can limit this experience. As we know, there is an interrelation between answer and question and if we are too busy with this question, we might become too busy with the search for one answer.

My work is just out there and randomly things occur to me, like when I did the work with the computer tomography, or when I filmed the reflections of others on the foil, this becomes a work itself. At one point this video of the reflections was exhibited as part of the Videonale in Bonn and it wasn’t even recognised as an artwork. I love this kind of sublime action of appearance and disappearance.

I love that in this work even when there is an absence of the viewer there is still something happening, and when the viewer comes back into place I can really play with this absence of meaning.