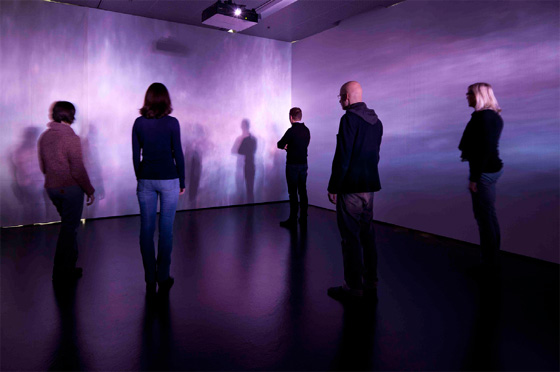 Mischa Kuball works with light’s socio-political dimensions across a range of gallery exhibitions and public space projects. In Platon’s Mirror Kuball draws upon one of the most influential stories within European literature: Plato’s allegory of the cave in Book 7 of The Republic in which the philosopher draws a distinction between two forms of reality: the reality of the visible world and the (true) reality of ideas. Kuball presents simple yet highly effective installations using projectors, silver foil, photographs and videos that create perceptual and experiential spaces analogous to that of Plato’s cave. In doing so he translates the complex relationships among light source, reflection, silhouettes, and representation into seemingly endless stages of mediation, within which reality is continually newly constituted as the reality of its reflection. 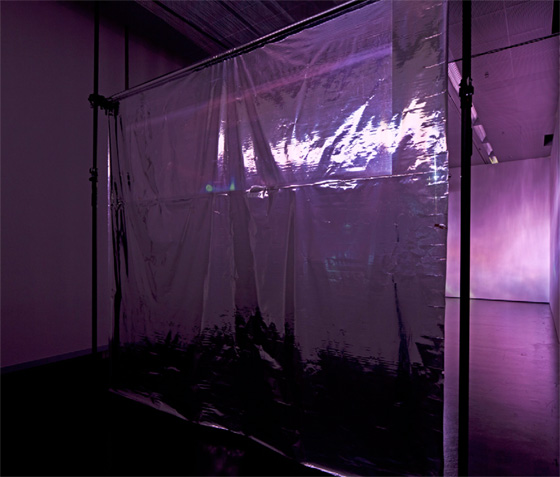 Mischa Kuball’s engagement with the allegory of the cave takes place in an era in which the problem of reality is barely considered in philosophical, sociological or political terms. The current fascination with the ‘performativity’ of the real apparently neutralises the issue of what within reality might actually be considered ‘real’. Kuball questions whether the problem of reality can so easily be discarded by declaring reality as only socially constructed. Questioning whether ratio and the intellect are still useful when it comes to comprehending a distinction between reality and apparition, Kuball’s work can not only be seen as an attempt at re-actualising Plato, but moreover as an attempt to question anew the classic connection between the metaphor of light and the idea of Enlightenment.

Mischa Kuball: Platon’s Mirror results from a unique partnership between the artist, Artspace, ZKM | Center for Art and Media Karlsruhe where the exhibition was shown earlier this year, and the Goethe-Institut who are touring the project internationally.

The exhibition is preceded by a symposium at Artspace on Friday 26 August (from 1pm) considering the significance of Plato’s allegory of the cave for present day conceptions of the real with particular reference to contemporary art. Chaired by Blair French the event will feature contributions from: Andrew Benjamin, Professor of Critical Theory and Philosophical Aesthetics at Monash University; Dr Adam Geczy, artist, writer and Senior Lecturer in Sculpture, Installation and Performance at Sydney College of the Arts, University of Sydney; Dr Jennifer McMahon, Head of Philosophy at University of Adelaide; and Dr David McNeill, Senior Lecturer in Art History and Theory at College of Fine Arts, University of New South Wales and Deputy Director of the Centre for Contemporary Art and Politics, CoFA. For further details and to download the symposium program visit [...]

Mischa Kuball: Platon’s Mirror and accompanying symposium are presented in cooperation with the Goethe-Institut Australien.

Mischa Kuball’s visit to Sydney is supported by the Goethe-Institut Australien.