He’s the entrepreneur behind the music label specializing in post-industrial music. In a frank, revealing and dark interview, Dave Heckman talks about his achievements—and also how the Internet is imploding the music industry. And the result? Get ready musicians: it looks like more of you will be facing the often ridiculous economics of most contemporary visual artists. 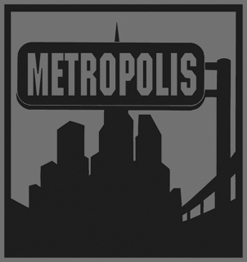 With humble beginnings, Metropolis Records grew out of a Philadelphia USA record store called ’Digital Underground’ in 1994 and has developed a strong reputation over the years as a leader in the music genres of electro-industrial, synthpop, future pop, darkwave, and gothic music.

In interview, R.J. Preece—a self-confessed Front Line Assembly addict, a band which is represented by Metropolis—interviews the entrepreneur behind the music label. (While typing the interview up... FLA’s Unleashed on Artificial Soldier plays in the background...)

The following are excerpts from the conversation:

R.J. Preece: Was it your aim to build such an impressive and extensive community of artists—or was this unexpected?

Dave Heckman: I’d have to say it was unexpected. I was happy to license a few small bands when I started, but once we got a reputation for being good at what we did, larger acts came to the record label. And we broke some bands that once sold a thousand [CDs] and ended up selling 50,000, which is very good in this genre. 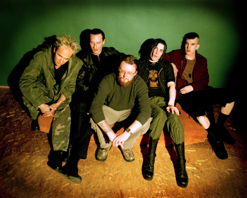 Photo of Front Line Assembly, by far the world’s greatest band, at least according to the artdesigncafe.com editor... three articles at Art Design Publicity have FLA "soundtracks". Paid for all of it to support "my band".

When I started Metropolis, I did not know—I did not think—I’d dominate the scene. I did not think I’d be working with Front 242, Front Line Assembly, KMFDM and Peter Murphy. I never thought that would happen.

R.J. Preece: What are some of your most memorable moments over the years at Metropolis?

Dave Heckman: I’m proudest about taking small bands that sell 1000 copies and turning them into a band that sells 30-50,000. We did that with bands like VNV Nation, Apoptygma Berzerk, Covenant, etc.

So I’m proud of the fact that we took small bands and made them bigger, and big bands came to me and I’ve loved working with them—most of them (laughs). 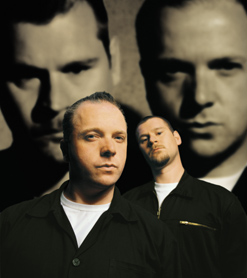 R.J. Preece: Which leads to my next question: what sorts of mistakes have you seen bands make when approaching—or working with—a record label?

Dave Heckman: I think most artists don’t understand what it takes to run a label, and I think I really didn’t know either. When I’d get a lot of complaints with bands, it was that they thought ads, print advertising, sold records. Metropolis started in 1994, and believe me, print doesn’t sell. So that was the biggest thing.

The important thing is just to spread as much around the underground, and work your way up. Whether it’s club, or radio, or Internet now.

R.J. Preece: Are you pro-active in identifying artists and developing them?

Dave Heckman: In the last five years since the record industry has fallen apart, I haven’t been that pro-active. Now it’s more bands coming to me.

R.J. Preece: What do you mean exactly about the record industry falling apart? 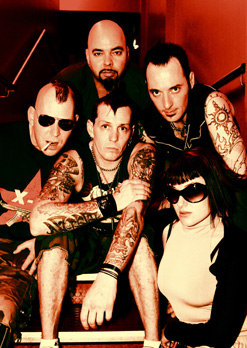 Photo of KMFDM, also represented by Metropolis Records and in the artdesigncafe.com editor’s music collection. Yep, paid for it.

Dave Heckman: Everybody knows about illegal downloading and burning. I got into the business when it was still on an upswing. But since 2000 until the end of 2009—that whole decade—in the industry there’s been a huge drop in sales. So almost all of the major record stores are gone.

The vast majority of sales are bought online, whether from itunes digitally, or Amazon digitally or physically, or a lot of record labels like Metropolis sell online themselves. Relatively speaking, we do a killer business because there are very few record stores around.

I’ve had many friends in the record industry long before me—they’ve all lost their jobs a long time ago, whether it was working for a record store, a label, a distributor.

This industry has been absolutely decimated. It’s tough and it’s not as fun as it used to be. I mean, you promote a band so people become aware of it and then they go out and illegally download it or copy someone else’s. 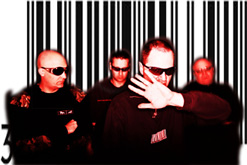 Photo of Front 242. Also in the artdesigncafe.com editor’s music collection—as well as an Editorial Advisor behind a red curtain. We both paid for the music.

R.J. Preece: Yeah, but maybe this is generational. When you’re talking about smaller bands, at some point you realize that they’re not living “the rock star lifestyle”, that when you buy it, you are supporting them.

Is this a generational thing?

Dave Heckman: To a large degree, but I know people my age [40s-50s] who steal music— don’t pay for it. And they’ll come up with excuses like “the record labels are evil”—like we are bankers or a big oil company.

Ninety percent of all music that is consumed is not (legally) bought. Even back in the 70s, when the cassette came around, even at that time period I’d say it was about 50/50. Now its 90%. Some people think that’s a low number, that it might be 95%, for every one song or album bought, there are 20 that are illegally copied or downloaded.

But it’s getting worse. Let’s take the people 10 years ago. The year 2000 was a great year for Metropolis Records. We broke a lot of bands. We sold a lot of records. The industry was at its peak, the label was at its peak. 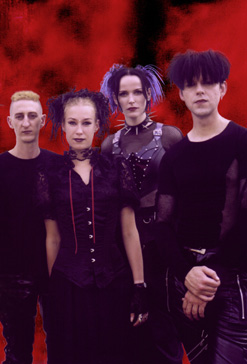 Photo of Clan of Xymox, represented by Metropolis Records.

My kids are laughed at by other acquaintances because they “buy” music. They’re “silly”. They’re “stupid”. “Why would you buy something when you can get it for free?”

R.J. Preece: So have online technologies helped a label such as Metropolis in any way?

Dave Heckman: For the most part, it’s destroyed many labels. But we have used the Internet for promotion, and I’ve saved about USD$100,000 a year not sending out physical promos anymore—we do that digitally. So I’ve had to adapt. But I think the industry would be off a whole lot better if there was no Internet.

R.J. Preece: Because of the copying element…

Dave Heckman: But before the Internet, I remember one of my employees was freaking out thinking we’d be out of business in a few years once they put CD burners in computers.

At one point, about 10 years ago, I thought that was more of a problem. Now of course I would say getting it online is a bigger problem.

R.J. Preece: You’ve specialized in particular genres, and the market supports that production to a certain degree. With this changing market, how is it changing the music, the selection, or the opportunities? Is it lowering it?

Dave Heckman: It’s lowering it. There are very few artists who can make a living doing this. So the art will suffer because of this.

I’ve heard arguments that it makes the music industry more “democratic”; there’s a lot more music out there, but it’s a lot less consumed. And it’s the record label which usually makes the consumers out there aware of the band. But now when you promote the band, they become aware of it, and then it’s downloaded or copied. 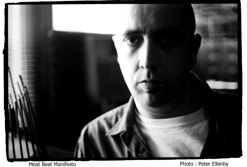 Photo of Jack Dangers / Meat Beat Manifesto, also in the artdesigncafe.com editor’s music collection. And yep, paid for these too...

R.J. Preece: Do you think there’s a way out of this?

Dave Heckman: No. Unless we go to a whole 1984 situation. I think it might be possible for the digital service providers to stop piracy, but it’s not in their interest. They charge for people to use the Internet. So it’s the technology companies pitted against the labels.

It’s disappointing to me, but I’ve accepted it. I mean most people write off the record labels as being “evil”. The big record labels against the consumer.

Well people aren’t “consumers” if they’re not paying for it.

R.J. Preece: Yeah, but you’re not a big record label.

Dave Heckman: Even if I was, you can take all of the record labels in the world combined, and they’re assets are not even close to what Google has, or the phone companies. 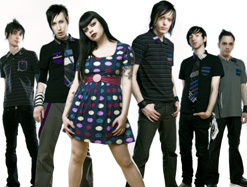 Photo of The Birthday Massacre, also represented by Metropolis Records.

At one point I thought consumers would start paying for the streaming model. We were starting to get revenue, people just pay USD$5-10/month, and the music is streamed versus permanently owning it. That revenue started to increase rather rapidly in 2007-08, and that revenue has plummeted as more people find ways to get it totally free.

Luckily, I’ve done well and didn’t squander the money I made in the late 90s and early 00s.

Some friends years ago said to me, “You’re pessimistic”. I said, “No, I’m a realist.” I’m not a pessimistic person in general; this is just the reality of the situation.

Bands that were selling 50,000 copies, still as popular, are selling 1/3 that they used to.

I don’t know how it’s going to change. It may be many, many generations from now. Music will have to exist in one form or another. It’s not going to stop.

But as far as making a living from it?

R.J. Preece: What about concert revenue? 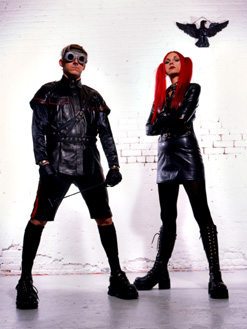 Dave Heckman: That got hit really hard by the recession. But I don’t participate in 360 degree deals with my bands. I don’t believe in that. I’m not saying there’s anything wrong with them.

Dave Heckman: That’s what the major labels do. Because their revenue is down from physical sales. They want to participate in a band’s touring and merchandising revenue.

R.J. Preece: Is there anything you despise about contemporary music culture?

Particularly now, every female artist out there portrays herself like a whore to sell records. It’s pretty disgusting—the pop world. The way they market it really has nothing to do with the music itself. It’s totally different when you’re dealing with underground music—it’s a very small culture.

R.J. Preece: Where will Metropolis Records be in five years time?

Dave Heckman: My goal is to keep my last five employees employed. I think we’ll do that. I’ve managed to survive while a lot of big independents are gone.

I want to continue to put out dark music.

I run a lean ship, so we’ll still be here!

R.J. Preece would like to thank artdesigncafe.com editorial advisor Stephen Mallinder for helping to shape the questions for this article.