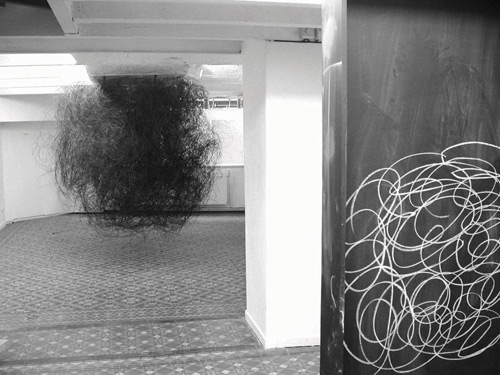 Some viewers of contemporary art, particularly Minimalist art, have been known to ask the question, “What’s the point?” but it is highly unusual for artists themselves to raise the issue. However, such is the case with German artist Marcus Bering, whose minimalistic work draws from a variety of influences ranging from the thoughts, actions, and critiques of his eight-year-old son to the 18th-century philosophy of Immanuel Kant.

On the exhibition front, Marcus Bering’s CV has been jumpstarted by a newfound confidence, largely aligned to an international network of practicing artists focused on non-objective art production. Over the past three years alone, Bering’s practice has gone from an essentially studio-centered production of sculptures, installations, and drawings to exhibitions at Elastic Residence, London; Non- Objective Sud in Tulette, France; Provinciehuis and the Sugar Factory in Haarlem and Amsterdam in the Netherlands; SNO Gallery in Sydney, Australia; and Raid Projects in Los Angeles. He also was featured in a two-person exhibition at the Center for Contemporary Non-Objective Art in Brussels.

Born in the 1960s in Germany, Marcus Bering first studied art history, philosophy, and graphic design. He later studied sculpture at the Academie Royale des Beaux Arts in Brussels, and in 1990, he returned to the Belgian capital where he now lives and works.

R.J. Preece: When we met, in 2002, you were isolating yourself in your studio, making art but not getting it out there. Why was that?

Marcus Bering: I was a stay-at-home dad, and I spent a lot of time with my son, who was just over a year old at that time. I was exploring with him, and on my own, basic visual elements that had close emotional or physical meaning.

R.J. Preece: And now, you’re exhibiting all over the place. And you’ve built an inspiring and very dynamic practice. What happened?

Marcus Bering: Well, for me, it was time to communicate my work “outside.” In 2005, together with Tilman, a painter, I opened the exhibition space H29. This introduced a whole group of like-minded artists to me, and the conversations kept expanding to other people.

R.J. Preece: I’m particularly drawn into your work through your experimentation with visual elements, but your work also uses theory.

Marcus Bering: Yes, that’s true. I am especially fond of Immanuel Kant’s Critique of Pure Judgment. I like to understand his work as a concept of art, as a free play between the extremes of the social and the analytical. Thierry de Duve, a Belgian philosopher, has recently reinvestigated Kant and, at the same time, aims to overcome some contradicting theoretical approaches in contemporary art, as exemplified by Clement Greenberg’s formalism and Joseph Kosuth’s conceptualism.

Having said this, a lot of my work starts by whimsically playing around with found elements, like a pack of beans accidentally dropped in the supermarket. The theory enters when I ask myself: How did I get here? How does this chaos make sense? Is there a point in doing this on purpose? This can lead to mathematical analysis or writing computer programs, like the drawing program I developed for the Raid Projects works (2006).

R.J. Preece: You might recall that when we first met, I was uncomfortable with your drawings but inspired by the sculptural application. Have you had this response from others?

Marcus Bering: The drawings were the results of small-scale, process-based exercises. They related sometimes to following my breath or my heartbeat, trying to draw as slowly as I could, until I didn’t know whether it was an act of controlling the mind or the nervous twitches that moved the pencil. What I was experiencing with the making was more important than the actual result. Once, at the Arteaspoon Gallery (2002) in Brussels, I provided a room with blackboards for visitors to produce similar drawings on a larger scale. But with rare exceptions, the results ended up more like graffiti on a toilet wall. There were even some inscriptions complaining about the emptiness of conceptual art, which I actually liked a lot. In contrast, my wire sculptures are very physical. It takes my whole body to manipulate a 100-kilogram wire ball. So these works are very much about making.

R.J. Preece: Do you see your work as responding to that of other artists?

Marcus Bering: I particularly like those artists who emerged with the minimal and conceptual art of the late 1960s, for example, the physical presence of works in metal like those by Bernar Venet, the use of paint on metal by Frank Stella. Also, I’ve been interested in Sol LeWitt’s concept of rule-based wall drawings executed by others. And, the music of Philip Glass, with its endless repetitions and permutations, has had a strong effect on my sense of structure.

R.J. Preece: I understand your eight-year-old son has influenced your work.

Marcus Bering: Yes. We spend a lot of time drawing, painting, and inventing things. For example, we wanted to know what 1,000 dots would look like. So, we constructed a game— these kinds of explorations feed back into my artwork. Kids are important to my art. At the opening in Haarlem, people seemed to like Mouse trouble a lot. They crouched under it, peeped through it. It was great— they were really exploring the sculptural space. 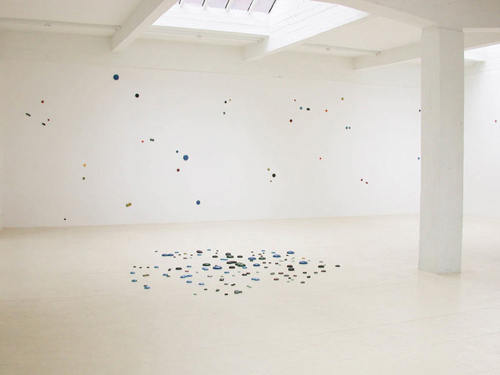 R.J. Preece: You’ve been changing your titles to fun ones— like Mouse trouble and What’s the point. Is this a strategy to pull in viewers who might find abstract and/or non-objective art more challenging than representational works?

Marcus Bering: Well, for example, a sculpture that looks like cheese— even though it results from controlled procedures transforming flatness and volume— spells out trouble, both for the mouse that just wants to eat it and for the concrete artist who wants compositional aspects to be valued. It escapes a clear grasp. That’s the point.