For those who support educational reform to better prepare graduates for the competitive workplace— and to bring in much needed entrepreneurship skills— we need more business decision-makers like Julie White to speak out. 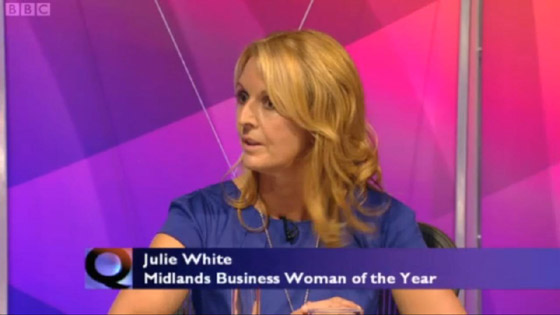 As the economic crisis in the West continues to tighten its grip, a healthy debate has developed asking to what extent higher education programs are sincerely preparing graduates for the non-academic world of work. And as a former academic, I strongly encourage all stakeholders in business, government, prospective students and parents— in other words, the customers— to take a very close and critical look before making their substantial investment decisions. This will ensure that you are getting the best value for money, and what you think is being promised can actually be delivered.

That’s why, with this perspective, I was rather pleased to hear Julie White’s views advocating work-based learning on BBC’s Question Time last summer— from her CEO management perspective of a UK-based SME, D-Drill, a civil and construction industry supplier providing diamond drilling, concrete sawing and other services. D-Drill has over 100 employees.

Frankly, we need more business decision-makers like Julie White willing to publicly speak out in this critical debate because reform is not always possible from within organisations, as we have seen over recent years in banking and government.

The following is my interview of Julie White.

R. J. Preece: Could you first explain, what are generally the kinds of employee positions at D-Drill? Is it the full-range including production, marketing/sales, and administration?

Julie White: There are positions available right across the board— from office-based jobs to the guys out on-site. We employ a mix of people. Some are qualified when they arrive but we are massive believer in apprentices. A big chunk of our workforce is either an apprentice or has come through the scheme. It’s not only good for D-Drill, it’s good for the industry because we all need to play our part in training the workforce of tomorrow.

R. J. Preece: In a statement on the D-Drill website regarding your appearance on the BBC Question Time programme, you say, “I was there to bring a business perspective to the debate, and I felt strongly about some of the issues that were being addressed, in particular with respect of potential education reforms that will clearly impact on all businesses looking to recruit young people, straight from school, or for apprenticeships.”

What are the kinds of educational reforms in the UK that you think would better train D-Drill employees and applicants—in various position types, other kinds of businesses you are familiar with, and to strengthen the competitiveness of the UK workforce?

Julie White: I think we have to get away from the idea of telling kids that the only way to be a success is to leave school, go to college or sixth form then go to university. That path is right for some and works for them but it also sees a lot of young people coming out of uni and they don’t really know why they have their degree and what it is going to lead to. I think there is already a slight sea change and that apprenticeships are now being taken much more seriously. Government policy needs to be changed to help more specialist businesses such as D-Drill to take on and train apprentices but it’s not just up to the Government to drive it. As a society we have to get out of the habit of telling young people that the only way they can make it in life is by going to university or by going on X-Factor.

R. J. Preece: What do you think the UK government can do to boost businesses, and specifically SMEs?

Julie White: Where do I start? In a way, this is an issue where less is more because none of us want the Government to run our business or tell us how to do it, we want them to leave us alone to get on with being successful. Red tape is a major issue on that front and we feel that all the time. So many hours go into unnecessary form filling and box ticking. We know in our trade that there have to be strict health and safety rules and we abide by them very strictly. Bank lending is another very serious issue in the UK because businesses who want to grow simply can’t get their hands on the money they need to fund that growth. There have been lots of noises made about improving this situation but it’s still a serious issue, in my opinion.

R. J. Preece: I understand D-Drill won the Coventry Telegraph’s Training and People Development award in 2012. Could you tell me about that?

Julie White: We were delighted to win that award. We also recently won an award at the Construction News specialist award and also were shortlisted for the Construction News training award – so we were up against the biggest construction companies in the country, which was a major pat on the back from the industry for the way we train our staff. As I said before, we are massive believers in training our staff— from apprentices to managers— and we don’t just talk about it, we put our money into it too because our whole ethos in providing the best service for clients comes from having the best people.

R. J. Preece: There’s a general movement in the UK to make, for example, university education more relevant to the workplace, among often fierce resistance by universities beyond lip-service. In my experience, the system at the end of the day wants to make practical business academic! I could give lots of examples. I’d argue that the reform, while encouraging, is too slow to address real employment, entrepreneurial and business needs. I’d also argue that, structurally, experienced entrepreneurs and businesspeople should be invited to lead the reform because they actually know what is needed.

I mean, if I wanted leadership on business development, I’d go to you, not someone who read and thought about it but never got their hands dirty. What do you think?

Julie White: Thank you! I do know what you mean. I don’t think it is fair to tar everyone with the same brush but the modern world requires people to understand the real world of work and that has to come from working, training and learning in the real world too. You can’t learn everything from a book or website, especially in an industry like ours. I certainly think many universities are seeing that working with industry is the way forward because it is better for their students’ future prospects.

R. J. Preece: I think it’s an absolutely crucial time for the UK regarding government funding initiatives for educational reform, workplace training, acceptance and appreciation for work-based learning and practical entrepreneurship, because will there be a second wave of government money in future to finally get this right?

What are your thoughts?

Julie White: Who knows? The Government had to tackle the deficit and it does mean that there isn’t as much money to go around. That said, all of those things you mention are key to driving forward the economy.

R. J. Preece: Part of the challenge I’ve found is an almost complete lack of knowledge of corporate education and HR development—personal development plans, Competence Management, and overcoming skill gaps—by government officials involved in policy, organizations awarding government funding for initiatives, and academics at all levels. Additionally, there are professional doctorates at certain universities that align to real business needs, versus traditional academic PhDs which may have no real interest in business development— and it’s the latter usually getting funded for business development initiatives!

Have you been surprised at some of the responses you’ve received interacting with universities and government about their perceptions about real workplace training?

Julie White: I think there is a general willingness and desire to become more on-the-job and practical when it comes to training and education. I recently spoke to a group of schoolgirls at a careers event and there was genuine enthusiasm from both them and their teachers about looking at different career options rather than the ‘traditional’ route. I have met quite a few politicians of late and they all say they want to see more practical strands to education because they realise its importance. It’s as much about getting the message out there to everyone that there is ‘another’ way.

R. J. Preece: On the BBC Question Time programme, I recall that you and Ruth Lea were positioned as speakers to give a business perspective. I’m not sure, but I recall Lea offered more of a think-tank and corporate perspective whereas you were more SME. I have to say, maybe because I grew up in an SME family business with customers like D-Drill, I identified more with what you were saying. What kind of responses have you had? Who do you think your core audience is?

Julie White: The response has been great. Overwhelming, in fact. My Twitter feed really lit up that night with lots of positive messages from all over the country. I think people understood that I am not a polished politician but was speaking openly and honestly about some of the issues I see in my day-to-day life running D-Drill. I don’t have a political agenda, I just want to speak up for construction and industry in general. I also believe that its important for women especially to see that you don’t have to have a First Class degree to make something of yourself. It’s as much about hard work and having the get up and go to do things that are out of your comfort zone.

R. J. Preece: What do you think about Ruth Lea?! I recall she freaked out by a response you made and became incredibly animated— and this was not her best performance!

Julie White: Actually, all of the panel were great and I had a really good chat with all of them back stage. It was my first time on the show so I am certainly not going to have a go at anyone else on the panel. People love Question Time because of the differences of opinion and it wouldn’t be the same if everyone just sat back and agreed. It was nice to get the odd applause here and there, though, which I hope proved my message was getting through.

R. J. Preece: Lastly, what compels you to speak out publicly about UK educational reform? I mean, so many other people would not speak out publicly— and try to profit from their silence and knowledge of the current state.

Julie White: I think it’s not only important to speak out but to actually do something about it as well. That’s why I have been such a big advocate of apprentices and have put my money where my mouth is and continue to employ and train apprentices. Our system has to move away from simply churning out youngsters who can pass the test but then don’t understand the world of work. I am not saying everyone is like that or that I expect a 16-year-old to turn up on the day he or she leaves school and be able to go out on-site. But, as I said before, it’s vital for the future of our economy and our country that we develop the talent of our youngsters that means they are ready to build a brighter future for themselves rather than handing them exam certificate after exam certificate.