Jukhee Kwon uses abandoned and discarded books to make extraordinary sculptures that frequently resemble cascading waterfalls. For her, each destroyed book— its pages meticulously cut into ribbons— takes on new life through the process of creation and re-creation. Her recent work, /fromthebooktothespace/, shifts its form from tree to book, from book to tree, creating a metaphor for the cyclical relationship of life and death, destruction and creation, nature and art.

Born and raised in South Korea, Jukhee Kwon received a BA in fine art from Chung-Ang University in Anseong, south of Seoul (2004), and an MA in book arts from Camberwell College of Arts, London (2011). Since 2012, she has lived and worked in Grottaferrata, a town to the southeast of Rome. Over the last few years, Kwon has exhibited at many different London venues, including La Scatola Gallery, Illustration Studio Space, Forman’s Smokehouse Gallery, GX Gallery, Hanmi Gallery, New Gallery, and Barge House Gallery. She has also shown her work in Brussels, Paris, and Anseong. In 2013-14, there was a solo exhibition of her new works at the October Gallery in Central London.

R. J. Preece: A recent press release says of your work, “Each book, while destroyed, claims a new life and existence through creation.” Could you explain how this works? 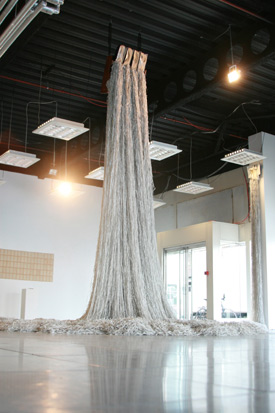 Jukhee Kwon: When a flower blooms, it breaks the skin to open its petals. When a baby is born, it comes out of its mother’s womb, breaking the mother’s protective waters. I think it is true that destruction can be creation. When I destroy a book, it is not just to destroy, but to create something.

A book is an object that originally comes from a tree. It is square and closed unless we open it. When I open a book and cut line by line and pull the paper out, the pages are still connected to the spine. As I cut, the pages burst forth, spreading themselves into space and expanding in size and form. The paper falls and stretches toward where it originally came from— the ground. Then, the shredded pieces start to join together in the form of a cylinder. Suddenly this book, this closed item, appears as a tree, a white tree.

R. J. Preece: The press release also says, “As she cuts each strand, she travels along her memories, the first conscious steps toward the creation of her new life.” Could you explain this statement in relation to Being (2012) and Book at V&A (2011)? 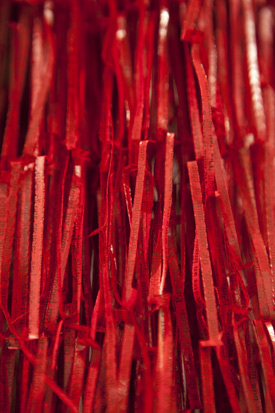 Jukhee Kwon: Choosing an old book is a bit like accidentally meeting someone. During this process, I communicate or meditate with the book and its resonance. Because this helps me to remember my own finite lifespan, I connect myself totally with the object as I handle it. The process becomes a meditation on life, being conscious of my life and the lives of others. So, as I turn the pages of a discarded book, I go through an entire life of memories, beginning with the first step in my own map of consciousness.

With Being, I was focusing my ego or “being” through the bookwork; whereas with Book at V&A, I focused on the being of the book itself. In Being, I wanted to project myself onto the books, to free myself, to explore my ego and personality— so something strangled or blocked broke the surface and exploded out.

R. J. Preece: What were you thinking about in terms of form and site when you were making and installing /fromthebooktothespace/ in various institutional and domestic stairwells?

Jukhee Kwon: I hang this nine-meter-long book in stairwells because they offer the best environment to expose the work’s entirety. People can walk up or down alongside it. It can also be seen at mid-points; in which case, it doesn’t look like a book anymore and gives the impression of a tall, white tree. I tried to create it so that the energy flowing down from the book exuded something very solid and alive, like a tree. 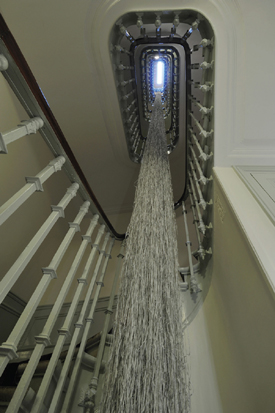 I often think that each of my creations gains a new life, and that I am like a creator through my action— the discarded book is born again, and it grows. When I was making /fromthebooktothespace/, it became like a very tall daughter for me. As I hung the book, with help from some friends, it was shaking and moving— it seemed to take on a life of its own.

R. J. Preece: How do you work with the paper? Is it sometimes shredded in some sort of way, or do you always cut it by hand?

Jukhee Kwon: I always cut the paper by hand— with a knife and ruler, to be precise. Paper is fragile, so it requires close attention when I cut the pages. For me, it is a performance, even though people don’t see me doing it. But they can imagine the action, effort, and time it takes, as well as the sound— and the excitement when I pull out all the pages from the book.

It takes a lot of time to make one of these bookworks. The bigger the book, the more joy I feel within my creative process. I unite myself with the object completely. I use the book to inspire my imagination, but the book also uses me to escape from its square structure and be free.

Jukhee Kwon: Red presence started after I moved to Italy. With its very different and passionate culture, the country has influenced me to think about who I am and what I am. I live in a remote environment, which has also encouraged me to think deeply about myself. That’s how I started to reflect on my past.

I tried to bring my past into the present. I was working on discovering my very first memory, and the color red dominated. It was just a small spot, but the memory filled my whole brain. My red is from the color of blood— blood is a vital substance for life, so I experimented with joining the color to an extinct element, a disused or rejected object. That is how red was integrated into Red presence.

R. J. Preece: Are you experimenting with other colors?

Jukhee Kwon: I am planning to carry on with color. Recently I’ve become interested in Prussian blue. I’m fascinated with it because of its role in photographic negatives. I can see how, in the future, a bookwork could be connected with this color. When I consider a color, I first research its history and background, just as I consider a site for an installation.

R. J. Preece: I particularly like the different kinds of sites that you choose for your installations— not only galleries and domestic interiors, but also rough sites. What kinds of rough environments interest you?

Jukhee Kwon: I am interested in sites with a particular structure, places that have not been refined, where you can feel that time has gone by and see the natural results of its passing. I also like to place my bookworks in very obvious places like libraries or sitting rooms, places where you might unconsciously leave a book. It is very important, for me, that a bookwork interact with the place where it is situated, creating a relationship with the site.

R. J. Preece: I understand you have been influenced by John Latham and Gustav Metzger.

Jukhee Kwon: With John Latham, I’ve been particularly interested in the radical innovations of Still and Chew and his controversial Skoob Towers book-burning performance. With Gustav Metzger, it’s his auto-destructive work. I am fascinated by the splashing of hydrochloric acid on sheets of plastic, which gave me insight into the relationship of action and result. Even though it is strictly controlled, the process always produces an unpredictable result. My bookworks are not 100 percent under my control due to my method. I’ve learned that sometimes I have to let them go rather than try to control them.

Another inspiration is Gustav Metzger’s To Make a Tree, in which he planted trees upside down. He transforms very obvious and ordinary objects through de-familiarization, just as I try to do with my bookworks. As Metzger mentioned, and I agree, it is fully true that destruction inevitably evolves into construction.

R. J. Preece: What does living in the West offer you that South Korea doesn’t?

Jukhee Kwon: In the West, I find that there is a deep understanding of differences and diversities in individuals, personal values, and opinions. Eastern culture is more reserved and passive, whereas Western culture is more active and direct. When I first moved to London, everything was confusing. I felt chaos inside me. But it gave me the freedom to be myself and to become confident, rather than confining myself to a certain standard. And changing my life has changed my art practice. The two are more closely connected now.