Born in 1954, Jagath Weerasinghe received a BFA from the Institute of Aesthetic Studies, University of Kelaniya, and an MFA from American University in 1990. He teaches art history, painting, and archaeology in Colombo. He has exhibited in the United States, the Netherlands, Germany and in Japan, at the 1994 4th Asian Art Show Fukuoka. 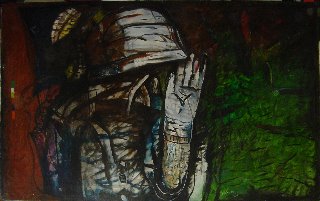 Jagath Weerasinghe: Black lines usually form the structure of all my works. As a child I remember very clearly making drawings on the wall of the well with charcoal. Those days, when we were kids, we didn’t have toothbrushes or toothpaste; instead we used burnt wood, I mean charcoal to brush our teeth. Early in the morning, you go down to the well in your garden and brush your teeth with charcoal. As a kid, I brushed my teeth and also made drawings on the wall of the well. At 42, I think that’s what I’m still doing.

In 1978, while a student at the Institute of Aesthetic Studies, I was abducted by a group of thugs and brought to the party office of the government that was in power then. It was the beginning of a dark era in Sri Lanka. My abductors interrogated and harassed me for 8 to 10 hours, then finally let me go. The incident changed my life; something drastic changed inside of me.

Around 1988, I began to make two distinct images: a fragmented stupa, and a tortured man with a long neck. With the fragmented stupa, I was responding to my inner suffering and to the chaos and the suffering of the people facing political violence, racism, etc. For us, the Buddhists of Sri Lanka, the stupa stands for the ideal; in 1988, an ancient stupa collapsed due to horribly incorrect restoration methods. The long-necked man was my attempt to portray myself as a Sinhalese Buddhist. By 1989, hundreds or thousands of young men and women began to disappear and to die in burning tires.

Then I was working with an image of a head, probably a decapitated one, and I inscribed on my works the following line: "I have enough guilt to start my own religion." In a way, I was reacting or responding to 1983 communal fights in Sri Lanka. During these riots, thousands of Tamils lost their properties and hundreds of them were murdered in the Sinhala areas by the Sinhalese. I am Sinhalese and a Buddhist. I was fighting within me what I saw and felt during that time.

For over five or more years, I was mostly working with these three images. They keep coming back even now.

Around 1994, I began to work around a figure struggling with edges of the painting and at the same time "mountains of weapons" and microphones came into my works. Weapons and microphones are the two major instruments that we use to manipulate society. Then for a while I was working with female figures and a few other images and towards the end of last year, the image of a soldier came into my works.

I consider Who are you soldier? to be one of my better works. This one is of a series of four paintings. I tried to capture our relationship with a soldier. We see them everyday, guarding streets and checking people. For those Sinhala fundamentalists who think war is the answer to the problems in the north, a soldier is a war hero who sacrifices his life for the "Motherland". For some others, a soldier is a bastard, a rapist! Both of these extremes are deceiving us and deprive the soldier his human rights as an individual. Who is really a soldier? We have reduced him to someone who wears a uniform, and carries weapons—we don’t see his face. We don’t think that he is an individual with his own personal pain and suffering; we have made him a victim as well.

The colored squares represent the colors of the Buddhist flag (a majority of Sinhalese are Buddhists in Sri Lanka). They add brightness to an otherwise murky environment: the way he hides realties of both war and the soldier, by placing the individual with national and religious sentiments. If you pull these colors away, the painting’s composition and its pictorial presence will collapse.

I have only the following objective for my work: to record my frustrations, my anger, and my helplessness in the face of organized violence, and try to probe and analyze this pathetic situation by way of my art. People buy my art for reasons that I don’t really know. Some people understand my works; most people complain that they can not live with them!