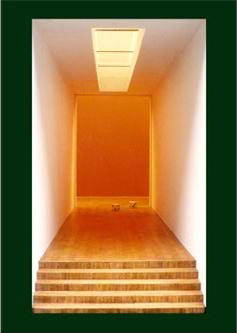 RPProjects will be presenting the second intervention of A Triptych across Time: Artists Respond to Bosch’s “Garden of Delights” (c. 1510-15) [* Eden * Hell * Garden of Delights] at the Museum van Nagsael (MvN) in Rotterdam, the Netherlands, which is the world’s smallest museum. For the second response to the triptych, “Hell”, London-based artist Jacqueline Pennell will present Aleatoric (2002), a minimal installation consisting of a pair of dice and two sheets of acrylic mirror facing each other. According to the artist, the artwork “engages with the interplay between the miniature, infinity and chance events”. 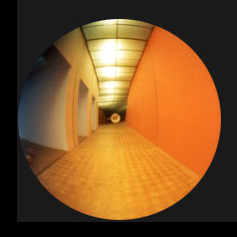 Conceived specifically for the intervention, Jacqueline Pennell’s Aleatoric is positioned inside the space, a miniature replica of a museum built to scale (1:15), contained within a two-sided, glass-covered display window. At Museum van Nagsael, two viewpoints are offered: facing the street at eye level, and also through a fish-eye peephole cleverly fitted into the side of the cabinet offering a closer and distorted view of the artwork/installation.

From the front view, the viewer sees only the rolled dice, monumentalised by the Museum van Nagsael’s scale. Meanwhile, through the peephole, the viewer peers into an endless corridor with numerous entrances, created by the face-to-face acrylic sheets. Ingeniously manipulated, each “entrance” contains its own pair of dice waiting to be thrown again, stretching into infinity. For Jacqueline Pennell, Aleatoric “suggests the uncertainty that endless chance events can induce, and the certainty that the future will be no different.” 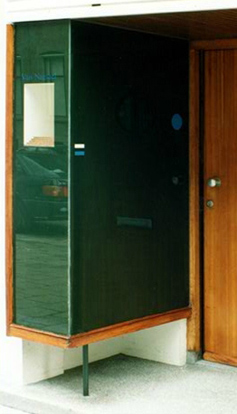 View of Museum van Nagsael, Rotterdam, the smallest "museum" in the world.

The “Garden of Delights” project was chosen in response to Museum van Nagsael’s miniaturised scale in relation to Bosch’s work— and the subject matter. As recent world conflicts saturate our global psyche and visual memory, Bosch’s vision of the world seems strangely compelling again.

In August, Jeremy Wood will install the final intervention for the project, addressing Bosch’s central panel by actively searching for “Paradise” [...] In April 2002, Susan Morris addressed the first part of the triptych “Eden” with her video installation Between Two Deaths (1998-2001), a bleached out black-and-white line drawing moving up and down across the screen, which reveals itself as a cropped detail of two bodies in the act of making love.

Aleatoric can be viewed at the Museum van Nagsael at Botersloot 40, Rotterdam city centre.