Imagine a proposed and completed public artwork recording the locations of 94 fire and flood disasters in Queensland, Australia; then imagine the unveiling of the work, as the artist reveals that the list doesn’t document natural disasters at all, but a series of 19th century atrocities against indigenous peoples. It takes guts to do this, especially in a small, interconnected network like the art world. Though such a strategy may build a following, it also has the potential to form divisions that might bite back. But if art is really supposed to reflect and comment on societal issues, then Fiona Foley’s Witnessing to silence (2004) at the Brisbane Magistrates Court ranks among the very best examples of how to bring a policy of truth through the system and into public art.

This kind of fighter mentality underpins Fiona Foley’s practice, which includes public projects around Australia, numerous international group exhibitions, and solo exhibitions at venues such as London’s October Gallery; Andrew Baker [gallery] in Brisbane; Niagara Galleries in Melbourne; Roslyn Oxley9 Gallery in Sydney; the Contemporary Art Museum, University of South Florida in Tampa; and a co-curated presentation at the University of Queensland Art Museum and Sydney’s Museum of Contemporary Art.

In order to explore Australia’s history, Foley uses aesthetic layering and storytelling to address conflict and exploitation. Her work presents a sometimes unnerving contrast between visually attractive form and confrontational content— fueled to some extent by her indigenous Australian roots and continuing fight for justice. At other times, her public sculptures are what they seem— representations of nature— that still leave viewers looking, thinking, and digging.

[To find out more, I interviewed Fiona Foley about her art practice stretching over 20 years. The following are excerpts of the conversation:]

R.J. Preece: When I think about how your work deals with historical atrocities and racism directed toward indigenous Australians, I keep coming back to the emotional content. What is it like to make these works, see them in your studio, propose them to decision-makers, install, discuss, and sometimes sell them? Is it difficult to combine such loaded content with the professional art game? I’m thinking of Witnessing to silence in particular.

Fiona Foley: Witnessing to silence was a well thought-out sculpture. I decided not to reveal the true meaning of the work until after it was installed; otherwise it would never have been approved for commissioning. I approach my work in a philosophical manner. Of course, some of the content addresses emotive subjects; however, if I were to dwell purely within that emotion, I would burn out very quickly.

My work is based on facts that I have read in numerous Australian sources. That is the starting point for my creative process. Most people are not aware of this history because it continues to be silenced. As an indigenous person, I feel that it is extremely important to expose these hitherto hidden aspects of Australian Aboriginal history. On the flip side, there is so much information now available in the public record that there is no excuse for Australians not to know.

R.J. Preece: After your revelation of the true content, did you consider subsequent discussions and media coverage as part of the work? Was Witnessing to silence a sculpture-performance?

Fiona Foley: Not necessarily a performance sculpture, but public art with layers of meaning— like Maya Lin’s Vietnam Veterans Memorial in Washington, DC.

R.J. Preece: Do you know how much media attention there was? I searched a usually good database for Australian media coverage (Lexis-Nexus Academic), and it seemed thin given what you did. In Britain, this would have been headline news, covered extensively in national newspapers, TV, and radio.

Fiona Foley: I will have to check my Australian PR! I can only talk about the work that I make, not the lack of media coverage. Would it be headline news in the United Kingdom or the United States? I can see how you might think that. Some papers are led by such ideas, aren’t they?

R.J. Preece: An early work, Annihilation of the Blacks (1986), refers to a massacre of the Badtjala people in Queensland in 1861. What was the reaction to Annihilation, and why did you choose this manner of depiction?

Fiona Foley: Annihilation of the Blacks is about an oral account of the massacre on the Susan River. It was an important work for me because, at the time, I was a third-year art student in sculpture at Sydney College of the Arts. It was received very harshly by my lecturers. I was able to articulate an aspect of my history visually, in a way that differed from the approach of other indigenous artists in the mid-1980s. My instructors had no comprehension of this work and what it represented. It was exhibited in Sydney, and I felt validated when it was bought by the National Museum of Australia. 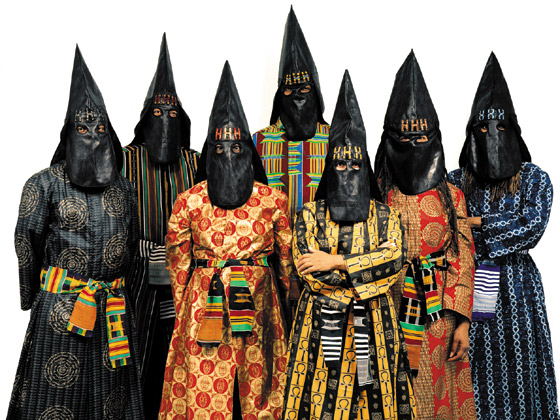 R.J. Preece: I understand that HHH (Hedonistic Honky Haters) started as a photograph and then mutated into a multi-part, wall-based cloth work. What led you to transform the photo into three-dimensional form, and could you explain why you call HHH playful subversion? 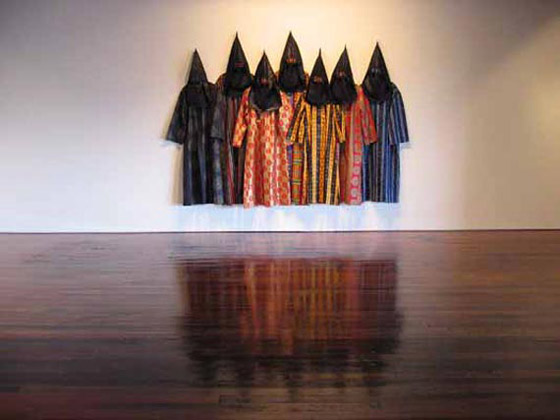 Fiona Foley: Whenever the work is shown— it has appeared in New York, London, and Australia— the costumes always hang in addition to the eight photographs. It is a playful take on the recognizable construct of the KKK. It was a matter of visualizing race politics anew. 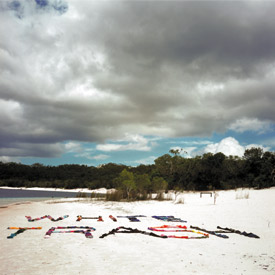 R.J. Preece: The photograph White trash shows a site-specific installation that you made. Why don’t you consider this to be a temporary installation?

Fiona Foley: Well, it was temporary in the sense that I made it to take photographs. White trash is half of a two-part photographic work called Signpost I and Signpost II, and it was created over one weekend on Fraser Island.

R.J. Preece: Could you tell me about your inspiration for Black opium?

Fiona Foley: I was inspired by the publication The way we civilise, written by Rosalind Kidd, and the history of the 1897 Aboriginals Protection and Restriction of the Sale of Opium Act.

R.J. Preece: What about the story behind DISPERSED (2008) and the hanging cloth pieces that you installed at MCA Sydney? Does the polished aluminum, and the style and size of the lettering, create a certain tension, considering the bullets attached to the first letter “D,” which is made of charred wood? 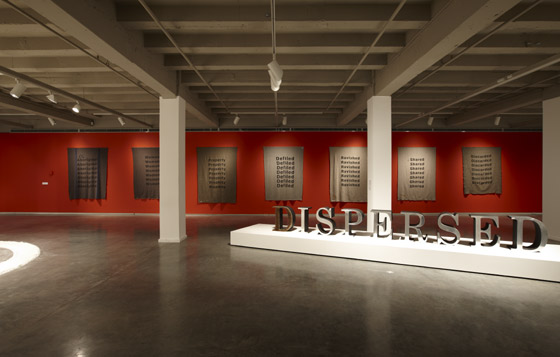 Fiona Foley: If you know how “dispersed” is used in historical government reports, then you know that the word is explosive. It is a euphemism for Aboriginal massacres. “Dispersed” is all about the killings that took place in the 19th century. The term was used because early settlers were unnerved by the thought of wantonly massacring populations of Aborigines. It covered up these killings, using a more palatable word for something vile. The Native Police, who were called Bullymen by Aborigines, used to “disperse” any Aboriginal groups that seemed “problematic.” The word is loaded with intent, which is why the work had to have a hard edge to it.

R.J. Preece: In Lie of the land (1997), you arranged blocks of sandstone engraved with key words from the journals of European-Australian John Batman (1801–39), who wrote about his purchase of the site of Melbourne from indigenous Australians. The same words were included in Chris Knowles’s accompanying sound installation in which they were spoken in seven languages— English, Indonesian, Dutch, French, Portuguese, Chinese— [I presume settler languages] and Wurundjeri [(indigenous)]. The journal passage says, “After a full explanation of what my object was, I purchased two large tracts of land from them— about 600,000 acres, more or less, and delivered over to them blankets, knives, looking glasses, tomahawks, beads, scissors, flour, etc. as payment for the land, and also agreed to give them a tribute, or rent, yearly.”

The work was originally installed in front of the Melbourne town hall for two months, commissioned by the Melbourne City Council to coincide with the 1997 National Reconciliation Convention. [Wouldn’t it have been better if the work were permanently sited there?]

Fiona Foley: The commission was always meant to be ephemeral. But as soon as I decided to use sandstone, the sculpture became permanent through material choice. The Melbourne City Council was very supportive, and Lie of the land is now in the collection of the Melbourne Museum.

R.J. Preece: Works such as DISPERSED, Black opium, Stud gins, and Bible and bullets are aesthetically beautiful, despite the disturbing historical content. Do you actively play with this contrast?

Fiona Foley: I am not playing. I am telling another version of history in this country, one that is not readily acknowledged in the larger Australian narrative.

Fiona Foley: No, there is no political content in these works. They are simply inspired by nature. There is a big difference between these works and the pieces created from historical sources.

Fraser Island could be said to be the root of many of my nature-inspired pieces. For me, the island is a magical place— a place where Aboriginal people have lived since time immemorial. Mounds on the island contain shell middens and stone tools. It’s very grounding— it allows me to know who I am and where I come from. 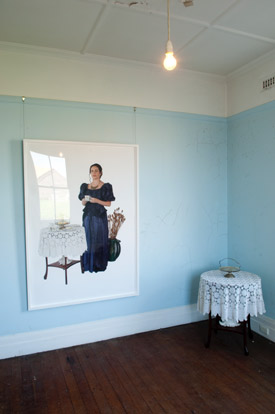 R.J. Preece: I read in Aesthetica that you categorize yourself as a “contemporary political artist with a bad girl reputation.” But in a press release issued by MCA Sydney for your 2009 show, you are quoted as saying, “What I am trying to talk about is a notion of truth… it is an oversimplification to call me a political artist and just slot me in a box. I don’t see myself that way. I’ve worked with different themes at different times in my life.”

Fiona Foley: Labels abound. Who I am is who I am, and what I make as an artist is what I make. It becomes tricky when you get pigeonholed.

R.J. Preece: [Could you explain a little about your “outsiderness” in Australia, because] while your work is confrontational at times, you’ve been able to get desirable commissions and shows. Is it a network or art world faction thing— with certain decision-makers passionate about your work— that keeps you going?

Fiona Foley: I really keep myself going; my career is generated by me. The most important thing is to follow the ideas that I have and to create them.

I’m sure that most artists will say the same thing. I believe that I can explain histories and stories of our complex culture to an audience because my “outsiderness” allows this. As I said, who I am is who I am— I can show, because I understand notions of truth— hence my continual historical research.

R.J. Preece: What was the response to Sugar cubes, which pays homage to South Islanders forcibly removed from their villages to work in the sugar cane fields?

Fiona Foley: I received support from the South Sea Islander community of Mackay; their thumbprints on the sculpture testify to that. I am not aware of how Mackay’s other residents feel about the work or how they view their historical past.

R.J. Preece: Many of your works, for me, seem to have a certain “presence.” This word also appears in a learning resources document from your MCA Sydney exhibition. What do you think about this word?

Fiona Foley: I’m flattered. I mentioned Fraser Island. It gives me a sense of place, and it grounds me; the island is a source of wisdom and integrity. Maybe its presence comes through in my work.

R.J. Preece: Among contemporary artists, whose work do you particularly appreciate? [Hans Haacke?]

Fiona Foley: There are many artists whom I admire. Some of them are Louise Bourgeois, Maya Lin, Tracey Emin, Doris Salcedo, Shirin Neshat, Frida Kahlo, Simryn Gill, Ana Mendieta, and Kara Walker— for their strength, integrity, femininity, and intelligence.

R.J. Preece: If there were just one thing that your work could achieve in terms of positive change, what would that be?