Living in California in the crazy and increasingly dangerous late 1930s into the WWII period, the two socialites collided with anti-Nazi vs. alleged pro-Nazi thinking, extreme spousal violence allegations and shocking divorce case publicity. Unfortunately looking back 80 years later, it is very time-consuming to cut through the publicity chaos and get to the facts. This article / fact sheet aims to set the record straight.

For an important summary, see "Meet the other lady behind the diptych: The depiction of the Marilyn Diptych as autobiographical for Emily Hall Tremaine". (Scroll down to article.)

It is also important to note that the extensive media coverage of this era is not really searchable on the Web. One must dive into a range of newspaper databases, often available in strong libraries with depth of coverage. 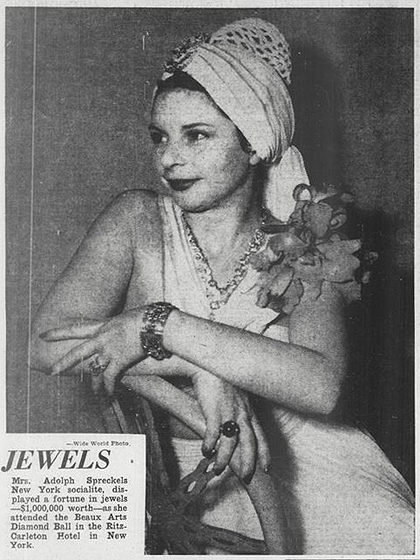 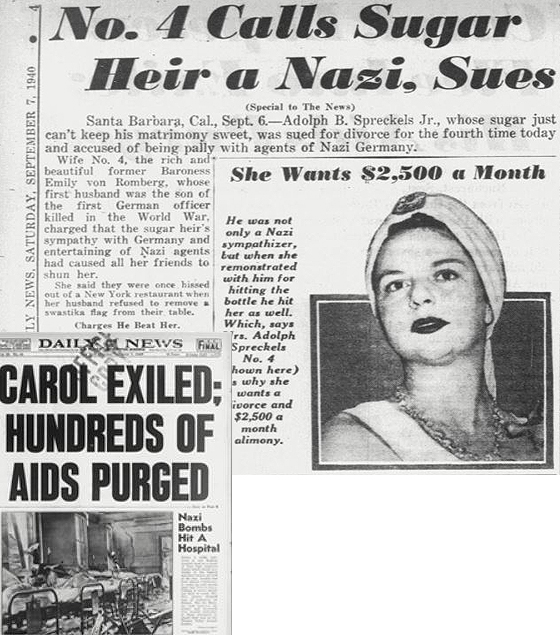 Above, news clipping in New York Daily News on 7 September 1940, with re-used photo of Emily wearing diamonds estimated in value today of USD$14-220 million at the Beaux Arts Ball in New York. Bottom left, front page of newspaper reporting on chaos in Romania and a Nazi bomb hitting a hospital in London in January 1940.

In 1940, Emily Hall Spreckels (later Tremaine) publicly blasted her second husband after a turbulent year-long marriage: "no" to his alleged spousal violence and "no" to his alleged pro-Nazism. This was reported, via her initial divorce filing, in probably all media markets across the United States via wire service reports. Then it got messy.

Key issue 1: With an alleged extreme spousal violence threat, Emily (Hall) Speckels (later Tremaine) stated in court statements and a deposition that Adolph B. Spreckels, Jr. forced her to do certain things. Whatever these alleged forced actions were, they would appear to be "under duress" and that legal standard should be considered. (See the initial court filing, pp. 2-4. Emily alleged that Spreckels was pro-Nazi, and clearly stated that she found the Nazi cause repugnant and against her principles and ideals. A copy of the full 180-page record can be ordered at the court house in Santa Barbara.)


Tried to Set Her on Fire,

Key issue 2: In addition to Emily’s allegations of extreme violence and threats by Spreckels, he faced a volume of later, similar allegations by two later wives and two girlfriends, with some allegations being extremely shocking. While even historical figures should be considered innocent until proven guilty regarding individual allegations, Spreckels was found guilty in a case brought against him by his later wife, actress Kay Williams. (Kay later married Clark Gable.) Spreckels was jailed for wife beating. There is a significant volume of reporting about these allegations, adding to previous mention in the discourse of earlier divorces by two wives of Spreckels. Emily was his fourth wife, and she also alleged spousal violence of a shocking nature. Therefore, these allegations must be taken as seriously as today, and close attention should be paid to them. 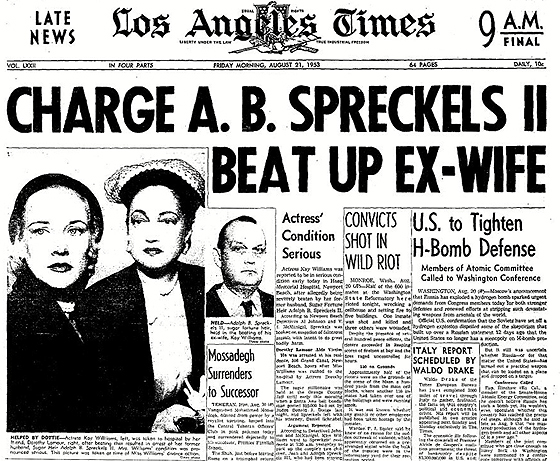 Above, front page of Los Angeles Times on 21 August 1953, reporting that Adolph B. Spreckels was charged with attacking Kay Williams-Spreckels.

Key issue 3: When taking into account today’s standard, we should be particularly sensitive to these historical MeToo charges, try to look at them more closely as would be done today, even regarding a historical case.

First and firemost, it is essential to secure a full copy of the court record of the divorce filing, 1940-41, Emily Spreckels vs. Adolph B. Spreckels, Jr. This is the key primary source documentation regarding the two and their allegations. His counter-allegations three months later regarding Emily and Max von Romberg are also put forth, and her response statement and details in her deposition. The three are filed presumably with penalty of perjury.

The two previous rounds of historical accounts did not refer to this documentation, although to short news articles, secondary source documentation at that time. The court record is about 197 pages and includes two signed statements by Emily, one by Adolph and a lengthy deposition of Emily. While news reports mention a deposition of Adolph, that is not in the historical court record.

This article / fact sheet is in development