This summer, a person in the Art Design Publicity sphere, "K", was vaguely contemplating doing visual arts business in Dubai and the UAE. This absolutely freaked everyone out who knew about it in the ADP sphere.

In response, we asked Radha Stirling, founder of the detainedindubai charity which assists expats in getting out of the UAE, to write a public letter advising "K" on his/her possible interest. 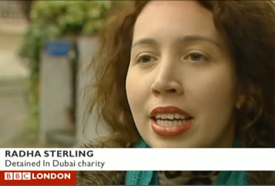 Conducting business in Dubai can be quite a risky venture. There are several things that need to be considered before entering into any business venture in Dubai.

A foreigner is usually sponsored by a local Emirati, this means that as a foreigner you are in a less powerful position. There have been various instances where a foreigner has entered into a business relationship with a local and due to circumstances are put in a compromising position. At this point the Emirate holds their position of power over you. You will have to be acutely aware of any changes in the relationship and also be very aware of any awkwardness. As soon as it becomes apparent that there is change in the relationship the advice is to leave Dubai without hesitation.

The United Arab Emirates (UAE) has many cultural differences to any western country. When something goes wrong in business and the police get involved, the police will tend to believe and favour UAE nationals over foreigners, and will treat you poorly. There have been several cases where partners in business set up foreign partners to get rid of them and keep their wages; they will take an action against you. In the UAE these cases carry a criminal sentence. There have been several cases where one of the partner embezzles, usually the Dubai national, and blames it on their foreign partner. As there is no paper trail the Dubai court system will favour their national over a foreigner.

Emiratis tend to take a dim view of foreigners and treat them as such. They are friendly and will make you feel very welcome, but when things start to take a turn for the worse, they will tend to betray you. You, as a foreigner, will end up behind bars facing a criminal conviction and many years in a Dubai gaol.

In the UAE it is a criminal offence to have a cheque bounce as well as any other debt related matters. As such it is advisable that you make sure that you do not allow yourself to get into a situation where you will be writing cheques on the behalf of a company. Also, avoid writing guarantee cheques, if you do, make sure that you have the funds to cover the cheque, even if you have a contract saying that the cheque won’t be presented until well after the cheque has been written. They can still cash the cheque and if there isn’t enough money in the account to cover the cheque, this will amount to a criminal offence.

In addition, it is advisable that you do not use your own money in business. You could lose it all and spend many years in criminal proceedings and in gaol if anything were to go wrong.

If there is any awkwardness or changes in the nature in your relationship with your Emirati sponsor, it is strongly advisable to get out of Dubai as quickly as possible, and do not return.

As always, this letter is general in nature and does not constitute legal advice. Please contact a qualified and knowledgeable lawyer to discuss your particular situation.