Interview-feature with the designer of Diederik van Lieshout’s Puck & Pip restaurants in the Hague, the Netherlands.

Imagine having the opportunity to design the interior of your favorite restaurant. That’s in fact the opportunity that designer/artist Mark Pimlott recently had, using the inspiration of the cuisine and clientele as the starting point. This then led to pulling in— and fusing— his wealth of architectural and artistic talents.

For Diederik van Lieshout’s Puck & Pip restaurants, Mark Pimlott with Zeinstra van Gelderen architects aims to create simplicity and innovation with a surprising set of spaces, textures, and visual devices within spaces that “look at each other”. The motive? To generate curiosity— and unique and personalised experience— much in the tradition of the restaurant, as well as that found in the courtly city of the Hague.

Born and raised in Montreal, Canada, Pimlott has pursued a practice criss-crossing fine art, design, film and writings. His previous work includes being a design coordinator for Ian Schrager design studio, Philippe Starck, and Harper Mackay architects for the Saint Martins Lane and Sanderson hotels, London (1999; 2000); designing interiors for the RIBA award-winning Red House in London (2001, with Tony Fretton architects). He has also designed monumental public artworks including Guinguette (2000), an outdoor party zone, and La Scala, an open air theatre facing the Irish Sea (2003). He has also been commissioned to design a major public space for central London with World, at the BBC Broadcasting House in London (2002-2010).

R. J. Preece: First, could you inform, how did you get the commission?
Mark Pimlott: Before, Diederik van Lieshout had a restaurant down the road, which I was familiar with, as I was a regular customer. I’ve been visiting the Hague a lot over recent years as I’ve been contributing to the research and development of the Interior Architecture department at the Technical University in Delft. I like good food, and a friend introduced me to the restaurant. Very quickly, the place grew on me. Not only is the place very friendly, but it is known for its cuisine— consistently ranked within the top 3 by food critics in the Netherlands.

One night over a very fine meal, Diederik casually proposed that I design his new space— and discussions moved forward from there.

I began to work with Diederik on the basis that I knew his cuisine very well, and I knew the light-hearted atmosphere of Puck. All of this would somehow come together in a completely different way in the new space.

R. J. Preece: How were you inspired by the food?
Mark Pimlott: Typically, the cuisine presents elaborate combination of very simple elements. It uses aspects of French cuisine. It’s not fusion food; Puck is about simplicity and innovation. Diederik just invents these things, based on the sensations one will have when eating them. 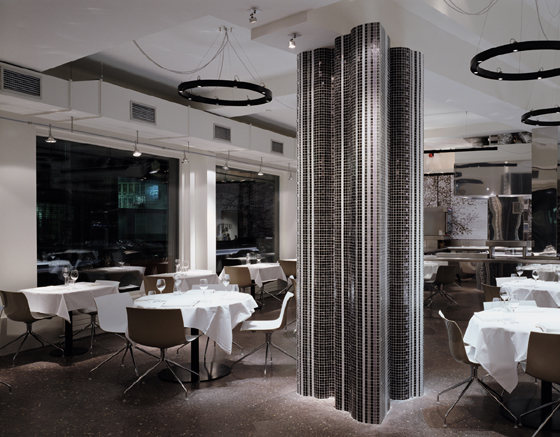 I remember early on eating there and having the “Surprise” menu. At Puck, I always have the Surprise menu. Early Spring was evoked by a delicate composition of simple elements: all together, they were so surprising, so unlike anything I had experienced before. At once, simple, complex and very inventive.

And this was my inspiration for the main dining room.

R. J. Preece: What other things inspired you?
Mark Pimlott: Well, you make a recipe and you make a place… We agreed that the upstairs space should be open, and simple. It should project the quality of a raw yet not quite industrial space. I knew his kitchen would be an important feature— with an element of theatre.

We became interested in making separate spaces for a main dining room, a bar, a private dining area, and the street—and the idea of all of these spaces looking at each other. 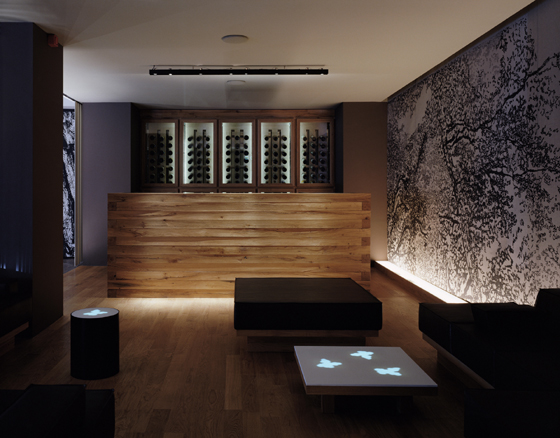 Puck & Pip: Photo of the PS Bar, which looks onto the main dining room (left) and exclusive, private seating space (opposite view). The bar features a solid oak bar, custom-designed leather seating, and tables with internal illumination that are in the shape of the "Miesian" column in the dining room. Photograph courtesy of Hélène Binet.

The relations between the spaces were intended to be subtle, veiled, if you will. One would be subtly aware of all sorts of things going on at the same time. A bit like the city itself, with its polite urbanity. This turns out to be a quality shared by the cuisine, which has been pointed out on numerous occasions.

At first, as you enter these places, they appear to be simple. But as you settle into them, they work on your senses and grow on you. And this is what the experience of the restaurant is all about.

R. J. Preece: You’ve incorporated sculptural and installation art elements into the design. Why is that?
Mark Pimlott: Well, with the empty space and the idea of the theatre, I started filling it with objects, in the manner of an installation of beautiful artifacts and backdrops. So the kitchen became a large metal object, almost like a sculpture. The column in the main dining room became a monument to the Modernist architect Mies van der Rohe. The aluminium and linen curtains became framing elements to a cool, but luxurious, private dining “stage”.

The “installation art” element is strongest in a space that is hidden from the main dining room: the transitional space between the upstairs and downstairs restaurants is completely lined in mirrors that reflects people and a video projection into infinity.

But overall I think of that space as comfortable, relaxed and casual, with a fusion of materials and pictorial effects, made for the pleasure of the kind of people that frequent the restaurants.

R. J. Preece: The transition space between the two restaurants comes as quite a surprise after viewing the main dining area and bar. And it could be argued that if there is one focal point in the restaurant, this is it. Why is this?
Mark Pimlott: I wanted the diners to enter a completely different world. Both restaurant use that space to go back and forth to the rest rooms. It’s designed to be disorienting. Other worldly in a way. 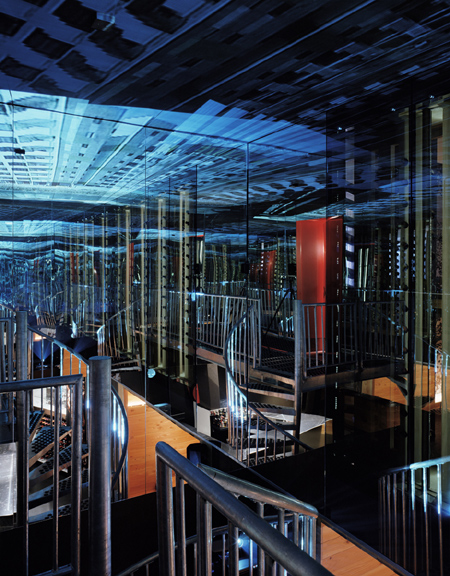 Designed to be disorienting. Here, Mark Pimlott certainly aims to highlight a notable transition between the two restaurants. Glass multiplies the visual space, while a projection of Modernist architecture emphasises height magnified by the film’s vertical movement. Photograph courtesy of Hélène Binet. 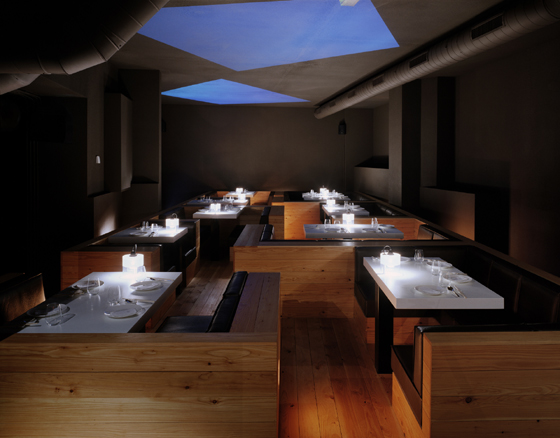 Puck & Pip: Photo of detail of ‘"the raft" seating area in the Pip restaurant, which features Asian "bites". A film of the sky with passing clouds is projected on the ceiling, creating the optical illusion of pillars of intense light. Photograph courtesy of Hélène Binet.

R. J. Preece: This leads into the downstairs restaurant, Pip…
Mark Pimlott: Yes, that’s like a minimal installation… in the dark. There’s the shiny, reflective bar, and the “raft” where people sit, floating around in the space, filled with a maze of tables, each with their own little lights. Video projections onto the dark ceiling above aim to suggest an infinite space above and beyond, and a sort of surreal feeling of being lost. So, Pip contains three, self-sufficient objects, in considerable contrast to Puck upstairs, with its rather elegant and eclectic layering of elements.

We’ll be adding different projections on the ceiling over time to excite people. Maybe action films or classic cartoons. I’m really excited about it. 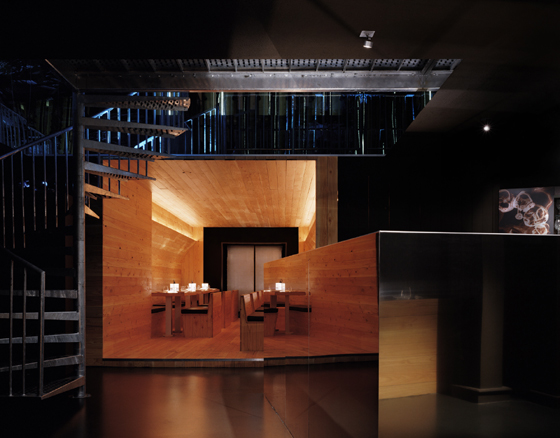 Puck & Pip: View within the downstairs restaurant Pip, from the centrally-placed bar, made of mirror-polished stainless steel, to a dining area affectionately known as "the sauna". Photograph courtesy of Hélène Binet.

R. J. Preece: How did you concretely translate the inspirations of your design into the designs that we see?
Mark Pimlott: I made a three-dimensional impression of what I thought the spaces should be— a series of pictures of the space. And I showed these to the client which was well received. So I developed the ideas further. Basically when you know the character that you look for, you choose the furnishing that will achieve that. So you basically go through the furniture that you know, the catalogues, the websites, etc. Of course the clients are consulted throughout— as they have a clear idea of what is right for their customers.

With other elements, sometimes you custom design them, and other times you look for the right contractors to execute the design ideas.

R. J. Preece: Previously, you worked for Philippe Starck regarding the famous St. Martins Lane and Sanderson hotels. What did you do exactly?
Mark Pimlott: I was a design coordinator, for both of the executive architects including the Ian Schrager design studio. I worked with others to help ensure that Philippe’s designs were executed beautifully. I was involved in the process from the very beginning and worked on the projects right through their execution.

R. J. Preece: What did you learn working with Philippe Starck?
Mark Pimlott: I learned to enjoy myself designing— to relax, to invent, in a much broader way than I had before. I also learned the value of an eclectic, free and humorous approach to the design of spaces and individual elements.

R. J. Preece: Lastly, going back to Puck & Pip, which is your favorite space?
Mark Pimlott: My favorite space is the bar. Why? Because it is simple and elegant, with a luxurious comfort made by light. We have made a painting as a backdrop to the room, that can be seen from the whole dining room. It is almost East Asian, but there is something deeply Western about it, too. And I like the fact that you can see the main dining room and all its excitement— through the metal curtain that protects the bar like a kind of veil.

I like it because it makes very filmic impressions on me. It’s extremely stark, but has this aspect of luxury: of special light, decorative patterns, real materials.

Looking out at the other spaces, you are both in the world—and outside it— at the same time.