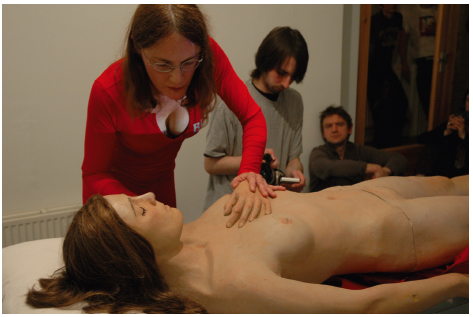 Gender, space, and forensic biography are the three themes that British-born, Australian artist Deej Fabyc has crisscrossed and crafted together in her performative installations over her 15-year career. She aims to interrogate the viewer with a range of work that is often demanding, aggressively thought-provoking, and sometimes shocking in its raw content.

Fabyc has performed and exhibited her work in 15 solo exhibitions in galleries and public spaces across Australia, including the National Gallery of Victoria in Melbourne (1997). She has also participated in numerous group shows in Australia, Europe, and the U.S., at institutions including Whitechapel Gallery, London (2005), the Reina Sofia Museum in Madrid (2003), and El Museo del Barrio in New York (2004). She is a Senior Lecturer of Video Installation and Performance at Newport School of Art, Media and Design at University of Wales, Newport. Having established herself as an artist in Australia, Fabyc returned to London in 2001, where she now resides and operates an artist-run space, Elastic Residence, in an 18th-century building in Whitechapel.

R.J. Preece: What exactly do you mean by “gender, space, and forensic biography” when referring to your work?

Deej Fabyc: By “gender,” I mean how we as people interrelate and create dialogues between each other via our gender. This, of course, is mediated through our personal and cultural perceptions. By “space,” I mean architectural, political, and social spaces. This also relates to my interest in surveillance in private and public space. And with “forensic biography,” I’m looking at things like crime shows, how they present death and medical procedures, for example. This collides with a more personal experience with death and people’s various experiences with medicine, including psychiatry. Perhaps that’s a bit complicated, but my work always plays off two or three of these main themes. When people get to know my work, they’ll notice that I’m often having conversations with my dead mother. But it’s not always so serious, sometimes it’s a bit Woody Allen.

R.J. Preece: Does the padded white room performance/installation relate to a personal experience?

Deej Fabyc: Yes. In 1989, my mother was found dead in the next-door neighbor’s garden. She was still young, 51, but her entire adult life had been plagued by mental illness caused by a tumor. I spent many hours of my childhood visiting my mother in various institutions. Obviously this had a profound effect on me. In this performative installation, I spoke to my dead mother through the site of the padded cell. I told her that I forgave her for things from my childhood that I now know, as an adult, were beyond her control. But at the end of the day, the work is about a rite of passage into adulthood with one’s parents.

R.J. Preece: And what about And she watched?

Deej Fabyc: Here, I’m talking to my mother again, although this time using a hyper-realistic, fiberglass, body-double of myself— as a cadaver. The performance starts off looking like a televised autopsy, but then it gets twisted. I enact a relationship with the cadaver, as both a part of myself and as a way to converse with my dead mother. At the end, I’m nude and lying on top of the cadaver, partly adopting a kind of doppelganger coupling or embracing of death. I worked with Ian Lander, who trained at Madame Toussauds, the famous waxworks museum. When the work was exhibited at Trace Gallery in Cardiff, I added a surveillance camera that records and simultaneously replays the viewer’s physical interaction with the cadaver. This then brings viewers into the installation, they begin to realize, whether they want it or not. It’s a bit sick really.

R.J. Preece: What would you describe as the major influences on your work over the years?

Deej Fabyc: There are many: TV crime shows; the photographer Jo Spence for her content, her documentation of herself dying of breast cancer; Robert Gober and Kiki Smith for their approach to the body. And also Richard Serra and Robert Smithson for a new project I’m working on. And, of course, Vito Acconci.

R.J. Preece: But what about Klein and Pollock? Here I’m thinking about Exit Action. Or is it that you see yourself as not influenced by them, but maybe attacking them?

Deej Fabyc: In Exit Action, I’m referring to both Pollock’s Action painting and its performance and documentation— and also to a live art event. I’m also referring to Klein with the use of the color and body print performance paintings. I wrote the word “exit” with my hair, and at the time, I was wondering if it would be possible for me to continue to make art. I saw myself as subverting the master narrative of Modernist practice, by literally turning myself upside down— and sort of taking the piss out of them. 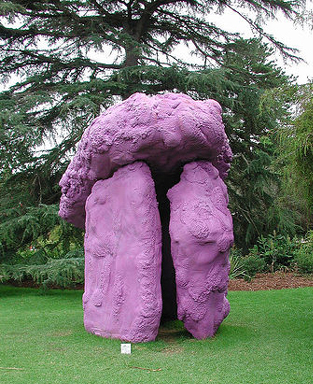 R.J. Preece: After considering these three works, it appears that you used a fundamentally different approach in Gateway to Mag Mell.

Deej Fabyc: Perhaps in its form, but conceptually Mag Mell is quite similar. The title refers to the Celtic heaven, without the moral and/or religious baggage that usually goes along with it. I made a gravestone and based the work on an ancient Celtic memorial to dead kings and queens. The work acts as a memorial to those who have passed on, so it is still working within the remit of art that looks at death, grieving, and associated trauma. The audience is invited to enter this space and perhaps contemplate possible other worlds. It’s a key project for me because it links to my current work in progress, which is becoming more involved with public outdoor sculpture.