They’re interested in murdering the idea of celebrity, and to regain the people’s trust in the social creative power of music and art. CMP’s Jeremy (Jez) Biggs talks about the remix—with Kieron B who made the associated video—made for Billie Ray Martin featuring Stephen Mallinder, based on the classic Cabaret Voltaire song and video. 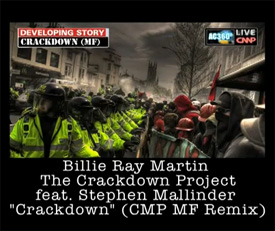 What started as a birthday party “fancy dress” theme influenced by Tom Wolfe’s Electric Koolaid Acid Test, Celebrity Murder Party has become more than a humorous play on “killing” the notion of celebrity in the hands of DJ and musician Jeremy (Jez) Biggs. Originally conceived as a free club event, Celebrity Murder Party became a non-profit cooperative outlet for raising funds for disabled children. Today, the club night side of Celebrity Murder Party’s activities has given way to a full-time DJ/remix outfit allowing Biggs and his fellow musicians to take mashup culture into new avenues reaching past London and into Berlin, Singapore, Paris, the United States, and other places. Among his collaborators are Billie Ray Martin, Stephen Mallinder, and the Scottish band “A Band Called Quinn”, just to name a few.

Working in Berlin on a video featuring a remix of Cabaret Voltaire’s original Crackdown track, Biggs says the video originally was intended to be a record of the event. Enter Kieron B, whose own roots in rave and mashup culture run just as deep as his experience in virtually all of the world’s largest broadcast news operations. As collaborator, Kieron extended the concept into a politically energized promo for this remix—featuring fast-cutting images of protests, riots, and confrontations with police in different parts of the world.

Kieron and Jez sat down with L.A. Roka at the internet-based Art Design Café to discuss the video, its extra-musical significance, and the state of the creative enterprise in music.

The following are excerpts of the conversation.

L.A. Roka: First, what is meant by Celebrity Murder Party? Do you want to murder celebrities, or the idea of celebrity?

Jez: We wanted to do something where people could come along, really let go and there was no kind of pressure to dress up in the sense of trying to make an impression. It started during the era of Big Brother [the reality TV show], which is a massive thing over here and all of us really hated the idea of the celebrity—that is, people who really couldn’t justify the idea of being in the public eye just for being on television. We wanted it to be a club, really inclusive, where everybody could enjoy themselves. In 2006, I started remixing and doing mashups with an online community called GYBO [Get Your Bootleg On]. In 2006 at a nightclub in the suburbs, I was really drawn to it when I heard Loo and Placido’s boot of Kid Rock’s “Althea and Donna vs. Queen”. A lot of remixing work (from Billie and Stephen) came out of bootlegs. And that is how I met Kieron who was really into the mashup scene.

Roka: How did you get involved in working on the video with Billie [and Stephen]?

This particular remix I’ve been not unhappy with, but I believe Billie’s interpretation was much more decadent and discofied. The whole concept of Cabaret Voltaire as disco is great but I wanted to do something that was much more in the political vein of the original—much more revolutionary. So I drew upon Tony Allen, the Afrobeat drummer and I wanted to mash it up with different influences including classical, Brian Eno—electronic—and David Byrne’s “My Life in the Bush of Ghosts”. It’s a really creative track—not being revolutionary in the musical sense, but in terms of the atmosphere of what you can say in the song because the song is talking about things that are going on now.

I’ve worked for all the major news networks and I’ve collected literally thousands of hours of riot footage that maybe aren’t the kind of thing you would see on mainstream television.

But I wanted to go further than that by using strobing effects and lots of synthesized noise. I wanted to completely disregard the notion of what we term in the video business as legal transmission standards. I wanted to bend the rules both technically and physically in what was possible in the 25 frames per second we would be using.

Roka: How do you see yourselves responding to the original Crackdown video?

Kieron: Having looked at the Cabaret Voltaire video, which I believe was about the Poland situation (Solidarity) at the time, I could only vaguely remember these terrible events as a child. Now, of course, a lot of my friends in this country are Polish and they grew up with this notion of fear and the experience of the Solidarnosc movement. They told me about the very real threat of being dragged up the streets. And, in Argentina, I had produced a couple of films about people who had disappeared during the war. It was the notion of how very easy it is for governments to slip into this role that “we know best and we will take you away from your family if you don’t toe the line.”

The Celebrity Murder Party logo. Not affiliated with CNN, "but we were never ever going to use the FOXnews logo".

Jez: I knew that Stephen is heavily involved in producing a musical receptacle of information that’s basically open and free to all so that people could study and improve their lives on their own. That runs so contrary to corporate culture. I watched the film “The Yes Men Fix The World” where they organize a mock press conference as representatives from Dow who say they’re going to pay compensation to the people in Bhopal, an act that sent the stock price down. Stephen was a champion of that film.

I saw him at a screening where he interviewed the producers and directors of the film and that really impressed me about Stephen. I hadn’t known outside of Cabaret Voltaire or the music world how much he was involved in the political side of things.

Roka: Where does the specific protest imagery come from? Is it about economic class struggle or also other struggles?

Kieron: There are scenes of riots from eight or nine countries. There’s a huge piece of fencing thrown at policemen which I think came from Riga. I believe that is wrong because policemen were injured, and I thought well, no, this is reality. This is what’s happening and if we’re talking about a war you have to have it represented in as much accuracy as you can master without offending people directly and without causing any problems for yourself.

This is stuff filmed by very brave people right at the front lines. There were a lot of things I left out because I didn’t want to alienate people to the point that they would switch off. It is a music video but, at the same time, it also is so graphic and presented in a very horrific way with the speed in which the picture changes and I tried to marry together riots from different countries. There are images of fire and the familiar Underground logo, reminiscent of the Brixton riots [1981] which had a huge impact on the social makeup of law and order versus the people. It still resonates. I mean the mistrust of the police is still very tangible.

Roka: I think this is a brilliant video demonstrating music-journalism, and music’s potential to become more relevant again.

Kieron: It’s kind of hard to compare that when you’re making a music video and having a sense of entertainment value in this. But also, apart from the point of having riot porn—which is what some people might look at it skeptically as serving a piece of music—it’s beyond that because we will be challenged with this in the relatively near future. There will be deep, deep cuts in this global recession. The government has said we’re going to cut “x,y,z; we’re going to cut this and that” but you still got these guys in the Cayman Islands trading billions and billions of dollars. We’ll be at the cutoff level where people remain passive or they become motivated and politicized to the point where they’re out there demanding answers.

Click to continue reading the interview in which the topics shift to copyright and the state of the creative enterprise in music: DJ Jez & videographer Kieron talk shop.