People who stop over in Brussels usually meander past shops selling chocolate and lace on their way to the city’s star attraction, Grand-Place, with its magnificent guild houses and town hall; art visitors may trek to the Horta House for some Art Nouveau extravagance or visit the Musées Royaux des Beaux-Arts to see David’s Death of Marat and the collection of Magrittes. Despite its strong sampling of art historical gems, the capital suffers a low profile when it comes to contemporary art—a situation that the Center for Contemporary Non-Objective Art (CCNOA) may remedy. Located just a short walk from Grand-Place, CCNOA, which also features architecture, has actively contributed to raising the visibility of new art in Belgium.

CCNOA is an unusual, hybrid space. “Call it Dia Center for the Arts— on a shoestring— but with a focus on contemporary abstract art,” says founder and director Petra Bungert, who launched the space in 1998. Born and raised in northern Germany, Bungert lived in New York City for 10 years. During that time, she was Head of Administration at P.S. 1 (1997-98) and focused on non-objective art with her Petra Bungert Projects (1995-97), exhibited in a 20-square-meter space in Lower Manhattan. She has also been active in publishing artist editions over the years. Bungert sees CCNOA as a continuation of this work.

Situated in a 160-square-meter white cube in a former factory building, CCNOA looks like an art space plucked out of SoHo. Over its short history, the center has organized over 30 shows exploring non-objective concerns in art. Bungert’s favorites include two exhibitions that she curated—“Dan Walsh and Olivier Mosset” (2002) and “Transforms & Constellations” (2000)—and another show, “Spatial Intersections” (2001), curated by Sophia Ungers. 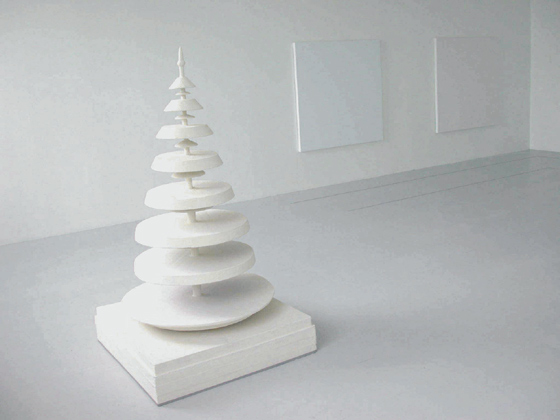 “Dan Walsh and Olivier Mosset” involved Walsh in an unusual collaboration with veteran monochrome painter Mosset. Walsh organized the exhibition space as a guide to viewing Mosset’s four paintings. In his recent installations, including 7 Grays (2002) at Paula Cooper in New York, Walsh works with the premise that painting today has become frozen in its own art historical context, and therefore impossible to see. His CCNOA installation was designed to enable viewers to see the beauty of Mosset’s monochromatic palette, and Walsh’s stupa-like sculpture Intervention set the proper tone to experience the color and simplicity, projecting a meditative quality. In the adjacent room, Sol Lewitt exhibited Copied Line (2002); he faxed written instructions for four artists to execute a line drawing in red, yellow, blue and black. 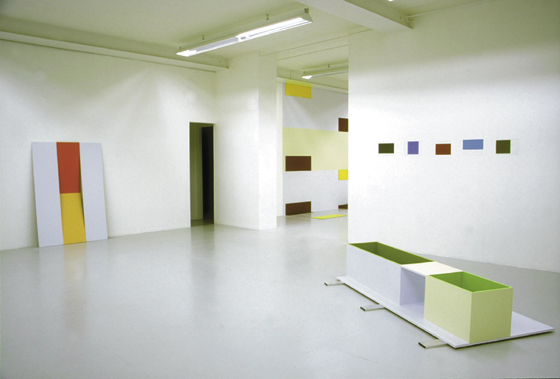 In his installation, Transforms & Constellations (2000), Brussels-based Tilman explored visual perception and the spirituality of color. The interior space was considered a framing element. Removing paintings from the wall, Tilman shifted the divisions between the autonomous work of art (on the wall) and “installation”. 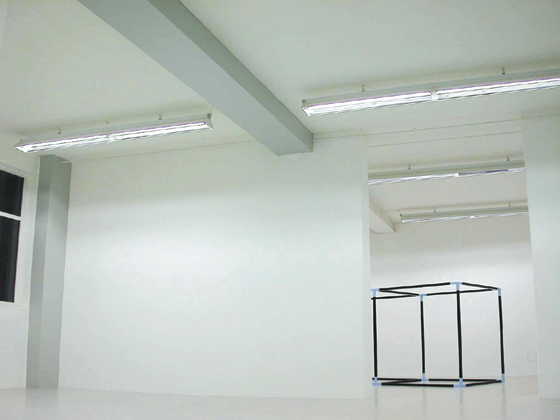 “Spatial Intersections” brought together five artists who explore spatial intricacies and divisions through sculpture, painting, constructions, and photography. Artist/architect Simon Ungers contributed Spatial Composition I (2001), a “spatial construction” highlighting elements in the existing interior with color to raise awareness of the space and structure. Ralf Brög exhibited two implied cubes forming a “sculpture-painting”, designed in relation to the proportions and dimensions of the center’s interior.

CCNOA recently launched its new architecture initiative with “Topos— Atopos— Anatopos”, curated by Belgian architect Christian Kieckens. The exhibition introduced an outdoor public art/design/architecture project by six artists and architects. Situated alongside a lock in nearby Ghent, the project is slated for completion in 2006.

Why the new plus-architecture remit? According to Petra Bungert, “We began this program because of the artists that we’ve been working with. Most are involved in this sort of investigation, and some are directly involved with art in public buildings and architecture commissions.” In the future, CCNOA is planning an annual exhibition centering on architecture.

What’s it like to work with CCNOA? Artist Joan Waltemath, based in New York, has only kind words: “The unique thing about working there is that when you do an exhibition with Bungert, you have a true collaborator. She never pressures you to conform to the limits of any exhibition or gallery conventions, instead she supports the efforts of artists who desire to break through those boundaries.” Waltemath exhibited a site-specific drawing installation (1999-2000) playing off of CCNOA’s interior.

When asked about the center’s challenges, Petra Bungert expresses concern about the art system in Brussels: “The Flemish and French-speaking Walloon communities are divided, and this affects the cultural communities—and funding… There’s also no structural encouragement for tax-deductible donations. And there is little understanding of how other systems work—in North America and other countries in Europe—and little curiosity about international positions outside the border.” Despite these difficulties, Bungert does work locally, but as she says, “in a much more selective way than in the past.”

In the future, CCNOA plans “to expand existing programming, including sound art, initate exchanges, start up an on-line journal with thematic issues—the first one on ‘chance’—and hopefully open an annex in Marseilles.” Marseilles? “Because we all should retire there,” jokes Petra Bungert. “Here, it’s gray, damp, and cold.”