First, a flashback to the media coverage concerning an acquisition of a Carl Andre artwork in 1976 by the Tate Gallery... 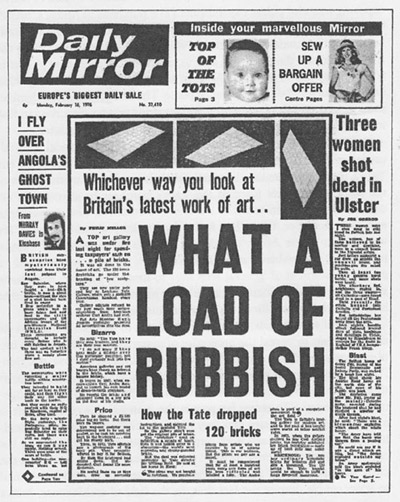 Now onto the press release for the show down the road...

Carl Andre: Mass & Matter brings together a group of sculptures and poems by one of the most influential artists of the twentieth century. Along with his contemporaries Dan Flavin, Donald Judd, Robert Morris and Sol LeWitt, Carl Andre is a leading artist associated with the emergence of Minimalism in the United States in the mid-1960s.

Carl Andre is famous for his sculptures made of ordinary industrial materials which are arranged directly on the floor in simple linear arrangements or grids. By reducing sculpture to its most basic elements and re-orientating it from the vertical to the horizontal plane, Andre helped to redefine the possibilities of sculpture for a whole generation of artists.

This exhibition, Carl Andre’s first in a UK public gallery for over ten years, brings together eight sculptures made between 1967 and 1983, alongside a collection of his typed poems from the same period.

At the heart of the exhibition, and of Carl Andre’s practice, is a concern with materials, which for Andre has always meant the common materials of everyday production – wood, bricks and metals such as aluminium, copper, steel, magnesium and lead. Andre selects standard, commercially available units of these materials for his sculptural arrangements without altering them. He has said, ‘my ambition as an artist is to be the ‘Turner of matter’. As Turner severed colour from depiction, so I attempt to sever matter from depiction.’

Like other artists associated with Minimalism, Carl Andre is concerned with the character of different materials. He describes wood as ‘the mother of matter’. Bricks are as valid materials for making art for Andre as oil paint or plaster. He considers bricklayers to be ‘people of fine craft’.