"When I look at it now, I don’t know what it is," says artist Mark Pimlott of his recently completed installation Guinguette, set beneath a flyover on the edge of Birmingham’s city centre. 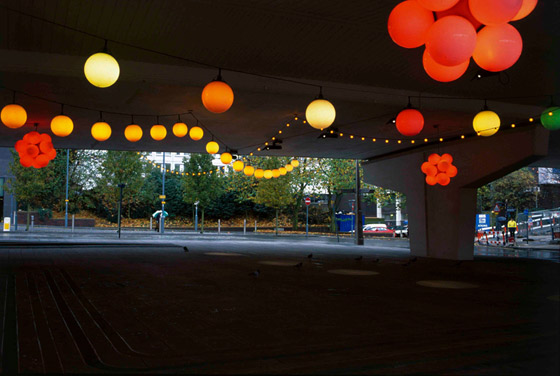 Mark Pimlott was commissioned by the owners of the Birmingham Mailbox building to design an intervention linking the new retail, office, hotel, and residential complex with the downtown— spatially separated by the flyover. “It seems to me like an art installation which could very easily be confused with being a design. It looks to me exactly how I though it would be— a dream,” explains the Canadian-born, London-based artist-designer.

Trained as an architect at Montreal’s McGill University and the Architectural Association in London, Mark Pimlott also received an MA in Visual Art from London’s Goldsmiths College in 1992. 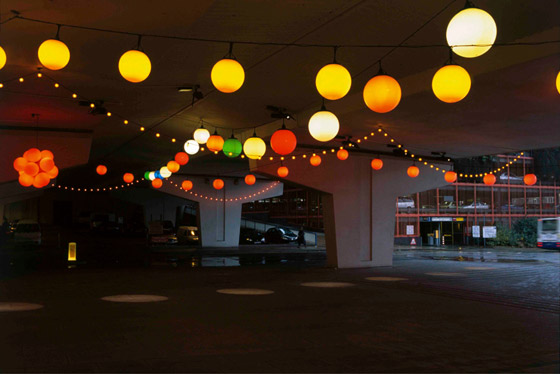 His work in art and design crisscrosses borders, which sometimes creates confusion for discipline-specific commissioners. In this case, however, it was an added bonus for the project. According to Vivien Lovell, Director of London’s Modus Operandi Art Consultants, which led the project’s artistic direction, “The level of conceptual and pragmatic expertise that this dual training provides very evidently benefits and informs the approach taken by the artist to a commission in the public realm. Mark possesses a rare ability to read the urban context and transcend it by responding with proposals that really aim to create a new life and function for the site.”

Mark Pimlott relied on a 19th-century Parisian model of the “guinguette,” a kind of club that existed on the perimeters of Paris just outside the legislative boundaries of the city— “lawless” places used for “entertainment and joy.” Pimlott decided to transplant the idea and “just invert it, from a negative into the ridiculously positive.” Throughout the day, more and more lights are turned on, climaxing in the evening when the lights are on full throttle. 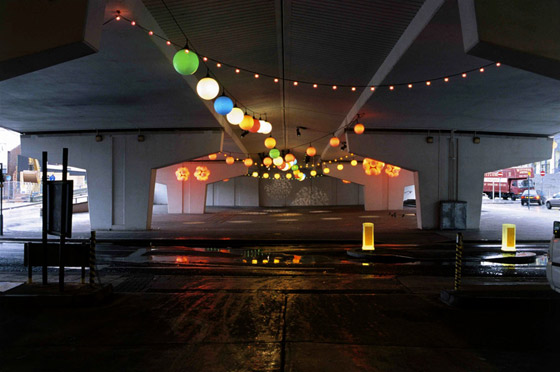 Lighting dominates the intervention, and studio Mark Pimlott designed the arrangement of luminaires and projectors, as well as the larger fittings which were manufactured by lighting contractors. Pimlott arranged the lights with different scales and optical effects, in order to manipulate depth perception. He perceives the color selections as being “like a painting of beads.” For Pimlott, Guinguette is both a very precise urban gesture and “something childlike.” In fact, during a recent daytime viewing, the younger audience was enamored.

The site itself has an interesting history. Underneath a city center ring road, Birmingham’s post-World War II Modernist urban design is notorious in England for its impossible and potentially crime-ridden spaces separating pedestrian and motor traffic. In this context, a nearby Mailbox guard— who didn’t know this was “Art”— informally protects Guinguette. Whenever Saturday night lager louts look as if they might dismantle the piece, he is “straight on them.” 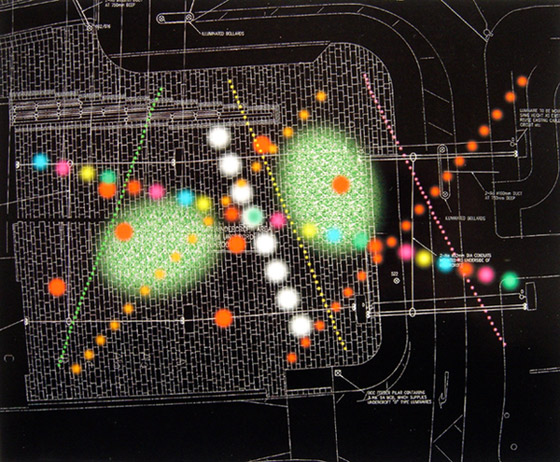 Mark Pimlott has exhibited his work at the Todd Gallery and Anthony Reynolds Gallery in London, as well as in New York, Toronto, the Netherlands, Kiev, Cairo, and in other locations in the United Kingdom. On the design front, he was one of two Design Coordinators for Ian Schrager’s London hotels designed by Philippe Starck. Writing, photography, and film are also part of Pimlott’s practice.