Why are the demands put on contemporary art historians so impractical? 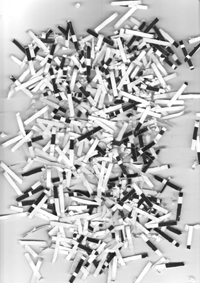 An art historical document, a copy of a letter, redacted, shredded, and scanned with white paper in the background (2009).

The following is for my university students...

I wanted to share with you… a letter, a lot.
It’s a special letter,
An art historical document,
that would open your eyes.

About an artist. About a writer. About the media.
The letter I want to show you was sent by a writer after the artist was very angry.
The writer mentioned the artist’s family in an article. Family secrets—that apparently
were not true.

The artist was so angry,
That the artist wanted to sue the publication.

“Very wrong.
I got it completely wrong.”

The writer said, “So yes, there must be a retraction.” A statement. An apology.
(On a page that no one really reads…
And probably won’t be covered in the search indices…
So no one will ever really know…)

I wanted to share with you this writer’s letter to an artist.
To show you: you’ve got to critically read everything you see.

But then a voice shot out—“PROPERTY LAW”…

That’s right—I found this letter on private property…
And it’s private correspondence,
and for some reason they don’t want you to see…

Maybe the “property law” block is true. Maybe it’s not. 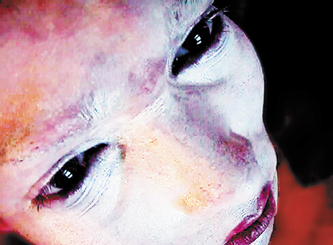 But dear students, to show you this letter I found,
I give up a lot.
The reason is behind the scenes, a socio-cultural element,
Which I won’t give up.

So, dear students, you won’t get to see this letter.
But then,
I don’t see you or your teachers exposing your politics—
in print, for all to see.


Now after thinking about it long and hard,
And through various frameworks,
With a range of considerations,
I now declare: this letter is not art historically significant.

Why?
Sorry, I can’t show you and…
Sorry, I don’t have time to discuss and…
It’s just not important…
Yes, it’s just not.


So my advice, dear students, is:
If you really want to learn about the basis of art, design and history,
the media, politics and how information flows,
from source to communications to writer and beyond—
go get a job doing media relations

for a government authority.


There you’ll see everything you need to know.
Everything—in its highest form.

It’ll be like working and living in a kind of Golden Age.

You can give information
everyday
to the media,
Then read and hear what you gave in a short time.
You’ll see politicians and writers make mistakes,
You’ll see people make good calls and bad,
Sometimes speaking truthfully, sometimes not,
In fact, something that you learned long ago—
And to some extent, participate in…

You’ll learn quite clearly that it’s not really what you say, or write,
It’s all about what you know…

And I think of you…

Photoworks of Seeds figures (2000) illustrating the mood of this article are by Lisa Holden, which were previously featured in an exhibition entitled UNLEASHED. “Exposing the layers is the key to UNLEASHED…” she said. Holden is not the artist mentioned in this article.