Harpa Thorsdottir
artdesigncafé - art | 14 October 2012
This essay was previously published in 2006 in the catalogue for the group exhibition Mega Vott at Hafnarborg Museum, Hafnarfjörður, Iceland.

Life is an inexhaustible source of creative material, and human ideals and determination can produce engaged and prolific work. The works of Anna Eyjólfsdóttir reflect the sharp sense of justice in our society. Anna has her own sound in a multi-voiced world. 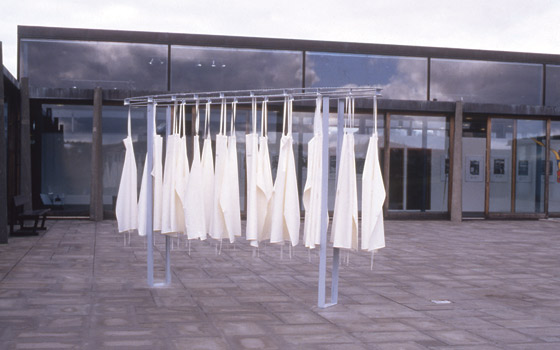 Harmony (1994) tells a simple but effective story of the development and progress of Icelandic society in the 20th century. The aprons of women fish workers are hung up and from loudspeakers we hear the sound of voices and machines from a freezing plant. The aprons form a circle outside like a wall of flags. They blow in the wind and the presentation suggests the pride of the women who until recently were the mainstay of fish processing in Iceland. Women have always worked in this industry, doing jobs that people look down upon nowadays. Anna Eyjólfsdóttir’s work reminds us of who we are and from where we come. It bears no derogatory connotations. In other works Anna has continued with similar references.

At the exhibition The Emperor’s New Clothes at the Living Art Museum she exhibited All is not what it seems where she presented the predictions of a well-known fortune teller about 12 female artists. In one sense the work established equality between the woman working in a fish factory and the female artist, to remind us that neither group does this as a sideline. Their jobs are dignified and on a par with other jobs in society.

Anna Eyjólfsdóttir uses interesting materials and often deals with things that we have ceased to notice or that have lost their meaning over time. In one work she arranged sink plungers next to discarded chewing gum on the pavement in front of the exhibition hall (Gerðuberg, 2000). In this way she drew attention to this widespread sloppy attitude towards the pavements in the city. Another example of her use of materials is from the exhibition Another Thread at Gerðarsafn in 1994 consisting solely of disposable wire coat hangers. These diverse works ranged from studies in patterns found in traditional Icelandic artwork to variations on different forms. She elaborates upon the form of the coat hanger, which has virtually no significance in the work but is just the basic material. The wire works also show the process of her search for material. She uses objects that she has accumulated over a long time. Among them are glass and clay artefacts, which she has employed in several works (for example at Laugarvatn 2005 and Korpúlfsstaðir 2006). 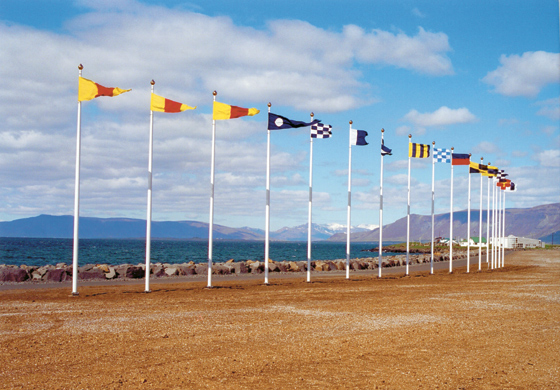 The outdoor work [Signalling Coastline] (2000) formed part of the exhibition by the Icelandic Sculptors’ Association called The Coastline which quite literally addressed the ocean. Symbols on the flags she set up there spell out “Strandlengjan 2000”. In this work the artist communicates visual art to the sailors and fishermen in the language of their own profession. Looking at this work prompts questions about accessibility to contemporary art and what kind of form of expression art really is, and also deals with the way that what is customary to one person may be alien to another.

It’s quite possible that Anna Eyjólfsdóttir’s largest work to date, the environmental work Paradeisos /Intramuros, exhibited at the Reykjavík Art Museum – Harbour House in 2002, testifies to the artist’s positive attitude towards life. Art history includes works from various times where artists have dealt with an idealistic paradise, where birds sing and men and nature live together in peace and harmony. But there is a certain irony in the title of the work, which is located outdoors yet within walls. The artist has pointed out one of its diverse allusions, honouring the memory of the labourers who once worked in the yard of Harbour House, and of the building itself. This work is therefore a memorial and at the same time a reminder of opposites. Can nature thrive within walls, within manmade cities and landscapes? Many of Anna’s works address the environment, such as Voyage II (1995), Figurehead (1997) and Eyvar, a large wooden pole set up at an exhibition at the Living Art Museum in 1995. The work is one of two at the exhibition on the subject of the cycle of nature. The top of the pole was bowl-shaped and filled with birch tree seeds, making it the beginning of a natural cycle. Birds would land there, eat the seeds and later disperse them.

A strong political awareness is apparent in much of Anna’s oeuvre and at the exhibition Political Thinking at the ASÍ Art Museum in 2001 she exhibited works on the theme of Davíð Oddsson’s ten years in office as prime minister. Political works have not been common in Icelandic art but here was an exhibition where the artist decided to feature, symbolically, politicians’ interest in culture, or rather, their lack of it. The aggressive question asked here is whether it matters at all who is in power, and what is their legacy.

There is a serious undertone to the works Anna Eyjólfsdóttir exhibited at the Figment exhibition at Reykjavik Art Museum – Kjarvalsstaðir in 2004. The works were manifold but their theme was “love, pain and petty private investigations”, as the subtitle to the exhibition stated. Most of the works were made from a child’s standpoint, using children’s toys and readings from fairy tales and sculptures alluding to them.

In producing work for this exhibition, the artist’s fantasy world was posited on her view that life is a play and that we are all unwitting characters in it. It represented a personal coming to terms with her childhood memories. One of the works was a cupboard with shelves, each containing one memory. Each shelf portrayed a scene from her childhood with small, naïve figurines and furniture. Such works often contain pointed messages about the artist’s viewpoint on society. Childhood iconography in works of art often touches a nerve as the meaning can become ambiguous. Photographs on a wall, printed on plaster of Paris sheets and wrapped in gauze, showed people in various poses, reminding us that wounds can be tended to and healed. 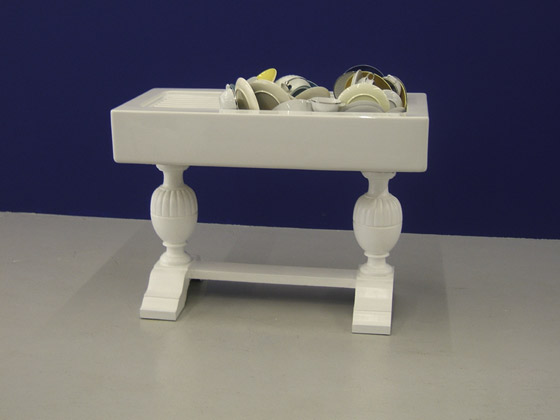 Anna Eyjólfsdóttir’s work often recounts her own experiences and the consequences of behaviour from ethical, social and political points of view. One of Anna’s latest works that combines this mental world is Thinking for Sink (2006), a large porcelain sink placed on table legs, full of dishes. The sink is a powerful symbol for the home and the regular rituals associated with it. Anna’s works often carry a message to conquer apathy and disinterest, whatever their origin.