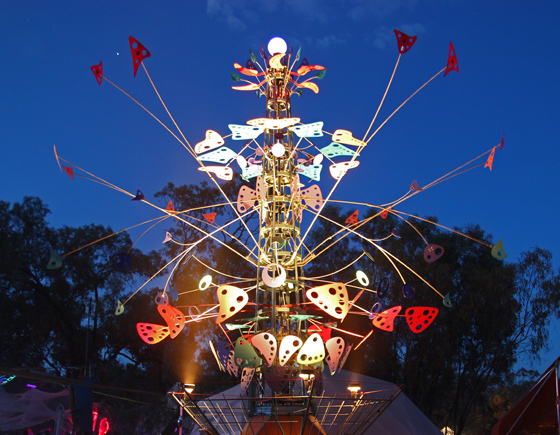 "Upside down" is one way to describe Alex Sanson’s thought-provoking approach to art. In fact, he offers a fascinating case study for artists seeking a financially sustainable business model and a wider customer base. His practice of placing works beyond narrow art capitals and the professionalized art world infrastructure is also inspiring. This approach is well-suited to his hybridized, dynamic, and fluid art-design practice. Sanson constructed his education in an equally non-traditional way, following a path advocated by some critics of the BFA / MFA system: focus on technique and making, while bringing in a wider range of approaches, studies, influences, and interests as legitimate choices for exploration and to stand out among a global oversupply of artists.

Sanson’s seven-meter-tall Susurrus (2014), an example of his frequent work with kinetic sculpture, simulates breathing, inhaling and exhaling. It’s an alien art spectacle that begs for a second and third look. Installed as part of an alternative music festival, Susurrus epitomizes Sanson’s strategy of exhibiting large and small works in a range of interesting venues in southern Australia— including a roadside gas station for travelers journeying into another alternative "venue", the Outback.

R.J. Preece: Susurrus was quite the spectacle, and the night shots are very special. How did this work come about?

Alex Sanson: I’ve been installing work at music festivals for quite some time, often blending sculptural and functional requirements. This time, I was approached with a completely open brief to create a work for the Maitreya Festival in rural Australia. This is an outdoor camping festival, with big open spaces, tall trees, and lots of people and activities. As a starting point, I wanted to make something of scale to fit the environment, equivalent to the trees, which were the largest objects around. I’ve always been fascinated by the cycles that influence so much of our existence— water currents around the globe, celestial bodies moving in space, the patterns of a bird wing, and, going back to trees, the daily cycle of inhaling and exhaling carbon dioxide and oxygen. Susurrus was meant to be a meditation on breathing at a tree-like scale, with slow cycles, endlessly folding and unfolding.

R.J. Preece: What did you aim to achieve with the design? How did you address a mainly non-specialist art audience?

Alex Sanson: At a music festival like Maitreya, artworks are rarely the primary reason why people are there. Nevertheless, art helps to shape the environment and atmosphere. So, in the rather hectic festival environment, I was aiming to create something that could be enjoyed at different levels, which included Susurrus’s changing patterns and meditative cycles, fascination with its mechanics, and more deeply, its symbolism and capacity to embody grace and equilibrium. Ultimately the aim was to manifest an atmosphere of peaceful and reflective engagement.

Alex Sanson: Both of these installations were commissioned for outdoor festivals held at the height of the Australian summer. The Outback Eclipse Festival was in the South Australian desert, and Shade Forest was made for the Rainbow Serpent Music and Arts Festival in rural Victoria. In both places, daytime temperatures can, and did, exceed 45 degrees Celsius. The festival organizers wanted something to provide shade from the sun, something visually rich, something to pull people together, and something that would also provide a canvas for video and light artists. Eclipse was meant to be oasis-like, a sanctuary that also provided a lot of visual stimulation in an open, dry, and sparse environment; Shade Forest was more of an extension of the forest where the event was held.

R.J. Preece: Small revolutions (2007) seems to take things in a different direction. How did this and comparable works come about?

Alex Sanson: I’ve always been fascinated by movement, and I’m often trying to find a place between chaotic and ordered pattern. Small revolutions uses movement as a story-telling medium, but the process was much more collaborative than my other work. The creative producer at the Melbourne Fringe Festival, Kath Melbourne, came up with the concept of using a marble run as a metaphor for one’s journey through life: the ball’s movement, pathways, and intersections represent key moments and decisions. So, Kath approached me and the other key artists, Jeremy Angerson and Nadja Kostich, to develop this idea. We created a flow chart, or schematic, of the different ways we might confront and pass through significant times in our lives. I translated this flow chart into physical form— a giant, recirculating ball run. While Small revolutions could be considered an oversize toy, a contraption or machine (and many people engaged with the work through this path), a much deeper interpretation could be found for those willing to look.

R.J. Preece: The staging of Gyre (2004) is majestic. How did the work’s placement come about?

Alex Sanson: I exhibited Gyre in the "Yering Station Sculpture Prize" exhibition in 2004, located on the grounds of the Yering Station Winery. While there were a few possible installation sites, one really stood out for me— the opening of the main winery building, looking out over a vine-filled valley to the Yarra Ranges hills. Gyre has a very slowly turning inner element, which generates shifting surface patterns reminiscent of circulating global currents.

R.J. Preece: Dinosaur Ant (2012) demonstrates how a simple sculpture can add an interesting focal point to an unexpected location.

Alex Sanson: The dinosaur ant was discovered by a scientist, Bob Taylor, when he got a flat tire one night in the remote outback. The ant turned out to be a very unusual and ancient species, and it became the main claim to fame of the nearest little town, Poochera. Towns in rural Australia have an unusual tradition of erecting huge "sculptures" of local animals or fruit, like a giant koala or pineapple. My colleague, David Waters, heard that Poochera had proposed creating a giant ant as a feature for the main business in the town, the "roadhouse" or gas station. I took on the task of posing the ant, and designing and building an armature from photos supplied by Bob Taylor. David was to install and render the armature.

R.J. Preece: How would you describe the local response?

Alex Sanson: Well, the armature was originally intended to be entirely covered with a polymer-based render, but people were so happy with the steel armature that David pared back the render so that it only filled the gaps in the steel work. Apparently, it is something of a talking point for the regular truck drivers passing through, and the townspeople reportedly love it.

Alex Sanson: Both Giddy Pirouette and Distant Ripple come from the same recurring theme in my work— repeating similar elements arranged around staggered or linked axes. As a part of the piece is pushed off balance, its energy is translated and flows through the other elements, forming and dissolving patterns that are formal, or chaotic, or somewhere in between.

Distant Ripple was inspired by the reported discovery, since disproved, of gravity waves emanating from the briefest moments after the Big Bang. This got me thinking of colossal forces acting across unimaginable distance and time, so attenuated by their travels that they are barely detectable. Distant Ripple is a reflection on forces acting from afar, perceptions altered, space and environment changed. Giddy Pirouette is one of a series in which I attempt to manifest a state of being or emotion in movement, rather than form, purely by upsetting the equilibrium of the work.

For some time, I’ve been experimenting with using feathers as delicate, textured, and ultra-low-density counterpoints to the weight and strength of steel, my primary medium. In a carefully balanced, heavy steel piece, the addition of feathers to catch the wind can create a surprisingly light, floating movement. Back to school is meant to speak to hatching or the growth from a gangly youth into a graceful adult, a rare direct acknowledgment in my work of the feathers’ origin.

Alex Sanson: My fascination with science and math led me to coursework in those areas. During this time, I started seeking other things to explore. It wasn’t immediately obvious to me that a life in the arts was in my future, but I found myself pulled in that direction. While I have taken various courses in art history, design, and drawing, as well as pursuing various technical training, I have avoided degreed study in art.

I think that this has helped me pursue a practice in a different, maybe less conventional, way. Pushing through a large body of work in my metalwork design business has also helped to develop and refine my approach. It has made me particularly aware of how works can and should integrate with their chosen setting.

R.J. Preece: Looking back, do you think that your metalwork business has given you an advantage in your art projects?

Alex Sanson: The metalwork business side of my practice has been essential in building my technical skills and also my confidence and ability to manage and realize large and complex projects. Early on in my career, I was frequently constrained by the need to create works within the limits of my technical abilities. As my skills and workshop capabilities grew, I felt increasingly able to think freely; now I’m confident that I will be able to manifest any ideas I may come up with. The downside is that the metalwork business takes up a lot of headspace, and I am pulling back more and more from the design aspect of my practice to more fully concentrate on sculptural installations.

R.J. Preece: Who would you identify as important influences for you?

Alex Sanson: Calder is an obvious one. My first memory of being touched by art is experiencing one of his grand mobiles in the newly constructed East Wing of the National Gallery in Washington, DC, at the age of eight. The scale, the gentle movement, the beautiful curved elements, and the slowly changing composition have had a lasting influence. Others include Lee Bontecou for her stunningly detailed later works, U-Ram Choe for his blending of exquisite engineering with organic form, and Theo Jansen for his wonderfully alive, wind-powered creations. Science has been an enduring influence: the more we discover, the more it seems that we, and everything we know, exist in an ever-so-delicate confluence of very many forces and equilibria.

R.J. Preece: Your work has developed outside the mainstream contemporary art system. Has this been by choice?

Alex Sanson: It’s true that my career started quite independently of the "art system", probably because I was trying to avoid systems of all kinds, being reluctant to accept their constraints. But now that I have more confidence in my work, I have been increasingly engaging with the more established art world.

R.J. Preece: What is one thing you hope viewers took away from viewing Susurrus?

Alex Sanson: I really wanted to create a sense of mindful tranquility. I wanted to capture a key, in-between moment. This is between inhaling a long, deep breath and releasing a transformative exhale. Anyone who has done breathing exercises will know exactly what I’m talking about.