I had just published an interview of Tony Matelli in the January / February issue of Sculpture, focusing mainly on the work he presented the previous year at ARoS Aarhus Kunstmuseum in Denmark. While working at my computer on 8 February 2014, CNN Europe was on in the background. Some sort of artwork controversy was previewed but I didn’t pay much attention. After the commercial, still working, I registered a familiar name. I quickly glanced over and my jaw dropped. Tony was speaking on CNN, in interview with Jeanne Moos, and all I could think was, "Why is he on TV and what on earth is going on?"

This was my introduction to the mass media Sleepwalker controversy, and I had never expected this would happen with a work by Tony Matelli, because he didn’t seem orientated to it. This is even after writing and researching quite a bit on other artists and designers interfacing with mass media over 17 years. Tony was equally surprised by the media response. (But then so was, or claimed, Tracey Emin with her media coverage-generating tent sculpture Everyone I’ve ever slept with 1963-1995.) During a quick telephone call later with Tony, we agreed to let the media dust settle and have a follow-up interview in a few weeks.

R. J. Preece: Tony, what do you think of the media frenzy?

I think it’s great that an artwork can still generate something like this. It’s been interesting and fascinating although I feel somewhat removed from it. The attention it received was so out of left field, so irrelevant to the work. So, I’m mystified by it really.

It’s also a lesson in how things go viral. I don’t know if this kind of media attention was possible before social media. A lot of the coverage seemed generated by the media but then also generated by social media.

The level of attention was super. It was fascinating just to watch it happen. It’s like watching yourself in a movie, like I was viewing all this as a third person.

R. J. Preece: What did you learn about the media, because this was your first semi-contentious experience, right?

It felt like such a lazy story honestly, because essentially many of these stories were the same one. Taken from the AP, the headline tweaked here and there. The story wrote itself. The headline was really punchy. To me, everyone wanted to put it in their newspaper because it’s easy and the story is semi-salacious.

It was covered thoughtfully by a few people though. I found it strange that the traditional art media barely touched it.

R. J. Preece: Have you been able to capitalize on this media event, in any way?

Tony Matelli: Not yet. The art world moves slowly, it seems, especially when something like this happens. I think the media attention scared people. It may have hurt Sleepwalker in the short term. When everyone saw the media attention, it kitschified the work, almost. Everyone owned it, in a sense. Collectors may have been turned off because now everyone owns this piece because it got so much attention.

It might take a little bit of time for the work to rehabilitate itself, or assert its own authority again, and reclaim some of its own intrinsic power, rather than the media defining what it was. Because the media attention was never about the piece, so I think all of it may have obfuscated Sleepwalker. 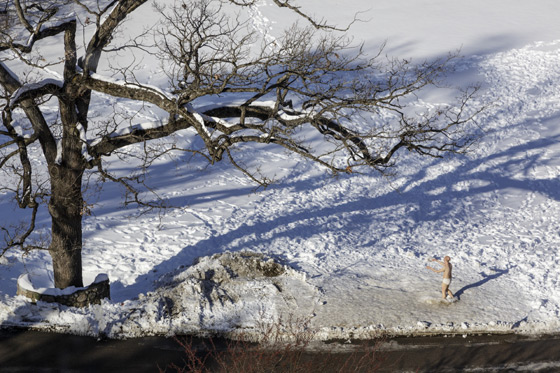