Imagine being the PR officer of an art exhibition that resulted in about 800 TV broadcasts and over 5000 articles in over 96 countries. For most of us, yes, we can only imagine this. But for Nina Berger, the media relations consultant at the Davis Museum at Wellesley College near Boston, this is now part of her portfolio. This result occurred during the controversy surrounding the outdoor Sleepwalker sculpture, by artist Tony Matelli, on the occasion of his solo exhibition New Gravity at the museum, which opened in February 2014.

Nina Berger, a publicity and media relations consultant specializing exclusively in arts and culture, works with a wide variety of clients engaged in visual arts, dance, theater, music, literary and educational initiatives. She’s been working with the Davis Museum since 2001. Her client roster includes the Rose Art Museum at Brandeis University, Boston Cyberarts, Cantata Singers, the Boston International Antiquarian Book Festival, Handel & Haydn Society and Summer Stages Dance. Before starting her own consulting firm in 1998, Nina was the Director of Public Relations at Boston Ballet for 14 years.

The following is my interview of Nina Berger.

R. J. Preece: Were you surprised by the full-on regional, national and international media coverage? 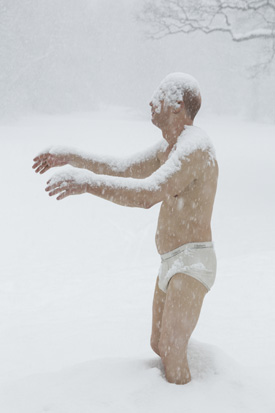 Nina Berger: Absolutely! I don’t think anyone saw it coming. I know I didn’t. Wellesley College Media Relations Director Sofiya Cabalquinto and I did think the Sleepwalker, and Tony’s exhibition, was newsworthy, possibly on a national level since New Gravity is Tony’s first solo museum exhibition in the U.S.— and had invited a photographer from the Boston Globe to shoot the installation— but we had NO idea how it would take off. The Globe ran a photo of Matelli’s Josh sculpture the next day, not Sleepwalker.

R.J. Preece: There’s something really interesting: sometimes TV stations have three news reports on their websites: via Associated Press (AP) on February 5; on February 6, either via the AP again or a distributed NBC News report (but on all TV network local affiliate sites) or another distributed article; and then an “updated” report on February 8. But the three AP texts are exactly the same.

I’m wondering what this means. Did all of these regional TV stations end up broadcasting it 2 or even 3 days at different times, or is AP text on their sites and broadcasts unrelated? Also, I wonder if this means they released the web-based story through their channels over 3 days.

What do you think?

WCVB, channel 5, ABC, in Boston reports on "Wellesley College ’sleepwalker’ becoming a national sensation". This video was embedded on many TV station websites across the USA.

Nina Berger: As for the local TV stations, they repackaged the story for different newscasts. Initially, some just talked about the story on air, using a still photo that had been posted by another news source. All of our local TV stations did a story on Tuesday, February 5— the day of the snowstorm— that was repackaged for the morning news the next day.

And, then they did another story on February 6 that included footage from the opening and interviews with Tony and the Davis Museum Director Lisa Fischman. They then turned around and fed their footage to national stations. And, what is available on their websites might not be all that they put on air. And, I think the Associated Press story often ran independent from the video pieces on the station’s website blogs.

ITN News in the UK reports on Sleepwalker at Wellesley College.

R.J. Preece: It’s really amazing when you look at regional media markets across the United States. It seems sometimes it was announced by up to four TV stations, radio broadcasts— talk shows, rock radio, etc.— and the newspapers. This is in addition to the national-level media layer, times the internet coverage, and then social media, the comments, etc.

Nina Berger: It is pretty amazing how many different types of media covered the story. Something of a perfect storm.

All this definitely has me rethinking how social media works as a news source. Somehow this story crossed over a lot of usual boundaries, and captured people’s attention.

I’ve been struck by what this whole story says about the changing nature of American, national and international media— both traditional and social media— and the how and why this story was of interest on such a global scale.

I know personally that it sparked numerous conversations about art, gender, feminism, psychology, higher education, and censorship. The list goes on. Although, the contrast of being on the ground and seeing and experiencing the real-time story, in relationship to the media story, are often two different, albeit, intersecting realities. Working in media for the past 30 years, that’s always been the case.

It seems that the real story is just a spark for a broader conversation that’s been waiting to take place.

R.J. Preece: As I mentioned to you earlier, I proposed and curated my first show, in a Hong Kong gallery, right after the handover to China in 1997 with a political activist theme, but by a Japanese artist to create that “acceptable” distance. Hong Kong is a regional media capital, and newspapers, radio stations, and even CNN Asia ran stories. For a long time I was in a daze about it, and it took years to feel like I understood what happened and why. But your experience is 200+ times that.

Nina Berger: Yes, I’m sure that with time, the impact of this story and its coverage will be seen through a new lens and from new perspectives. I don’t remember a work of art ever engendering so much discussion. Maybe it’s the mix of humor & gravitas in Tony’s work that gives people an entrée. His art elicits so many questions! What is art? What is acceptable as public art? How should it be controlled? How do we define public/private space? How should art make you feel? Not to mention deeper questions of our humanity. Already, conversations in the media have evolved to include his Sleepwalker as a touchstone – in larger discussions of academic and artistic freedom versus social justice. And, I’m sure the nature of the conversation will change with time— as will our analysis of the story.

Antena 3 Noticias in Spain reports on Sleepwalker at Wellesley College.

R.J. Preece: What new things did you learn that you will add to your practice?

Nina Berger: I’d like to try out more strategic use of social media for spurring on news coverage. It’s something I’ve been incorporating in my practice to date with some success. But it’s critical to be mindful of timing, image use, language, relevance— and of course, your long-range PR goals.

R.J. Preece: Do you have any advice to PR officers or artists that wake up one day and find themselves under the national— and international— spotlight? I particularly recommend artists getting media training…

Nina Berger: Of course getting media training is very helpful. Luckily, Tony Matelli, and Davis Director Lisa Fischman are very articulate, introspective, and down-to-earth. Tony’s on-campus discussions were critical in diffusing some of the tensions around the Sleepwalker installation and media storm. I always recommend being honest and staying true to your personal values, sticking to simple core messages, knowing your audience, and contextualizing your work and practice.