Damien Hirst’s diamond skull at the Rijksmuseum: Behind the scenes (2008)

To what extent have marketing and publicity become art?

On 30 October I was invited to preview Damien Hirst’s installation of the diamond skull and an accompanying exhibition of 17th century art curated by Hirst at Amsterdam’s Rijksmuseum. I saw this work shortly after a special meeting a day before the press conference.

After a lengthy overview presentation about the visual art and proposed context by the Rijks staff, a Q&A developed focusing exclusively on why we were there: because of marketing, media relations and journalism.

Here are some excerpts of the conversation:

Damien Hirst’s diamond skull at the Rijksmuseum: Act I

German journalist: Would you be willing to tell us how much Mr. Hirst charged?

Pijbes: Nothing. There were costs of course to put up the exhibition…

German journalist: So, no honorarium for the artist…

Belgian journalist: Who owns the skull?

Pijbes: We’re not allowed to [say]… it’s normal museum practice. When objects are in private hands, [we do] not disclose the owner.

Belgian journalist: I trust you won’t say it, and I trust everything said here has been completely true, but… it’s very marketing-like actually. He just sold [works] for millions at Sotheby’s. This is a beautiful… stunt.

That’s why I think the question of the owner is important.

Pijbes: Like most museums, we loan a lot of artworks every year. Of course, there’s always this aspect that if a high prestige museum puts a work in an exhibition, and makes a catalogue, that people will come. It will push the value of the work of art. That’s the system.

When you write about it, the same happens.

German journalist: Whatever we write.

[Nervous laughter occurred around the table.]

Pijbes: But this [installation] is in a category in itself.

It doesn’t make any difference if the Rijksmuseum put this on view or not. It doesn’t add to the value of the work.

Preece: Was this decision made easily by the Rijksmuseum? Were there lots of discussions about whether to do this or not?

Pijbes: Last year, it was mentioned to the supervisory board, of which I was on prior to becoming the director last July. We all said, "Yes, it was a good idea". Of course, there was discussion, but not controversial discussion. It was a logical thing to put the skull here.

The Rijksmuseum is an open-minded institution and looks very closely at what’s going on in society. We’re a 21st century institution with a splendid, award-winning website, with many young visitors, etc. It’s a perfect thing for the Rijksmuseum.

Preece: The first stop of this proposed tour is the Netherlands, and we can expect a certain amount of media response from this. There was after all a gaint surge in coverage in London last year.

Do you think this is good for [the representation of] the Netherlands in the world?

Pijbes: Yes. It will attract people—and gives a new aspect to the image of Rijksmuseum as well. It boosts our image. Of course we do the Old Masters but we are not a "yesterday institution". It’s for now. And Damien Hirst shows this in a very strong way.

In this sense, it’s good for Holland, internationally known as an open-minded, small country, with an international focus, and open to new ideas.

In this sense, it’s a very Dutch project. 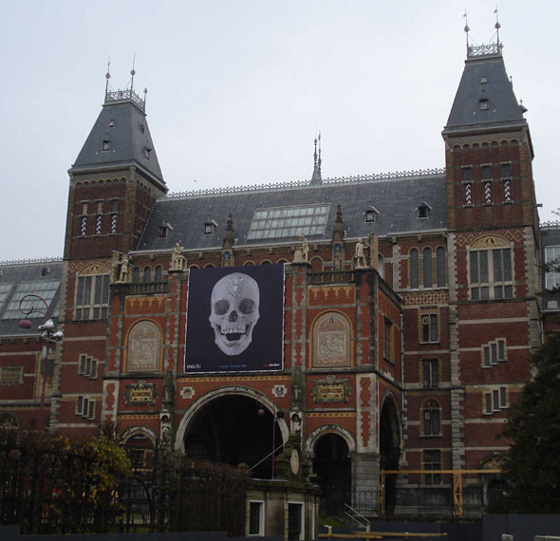